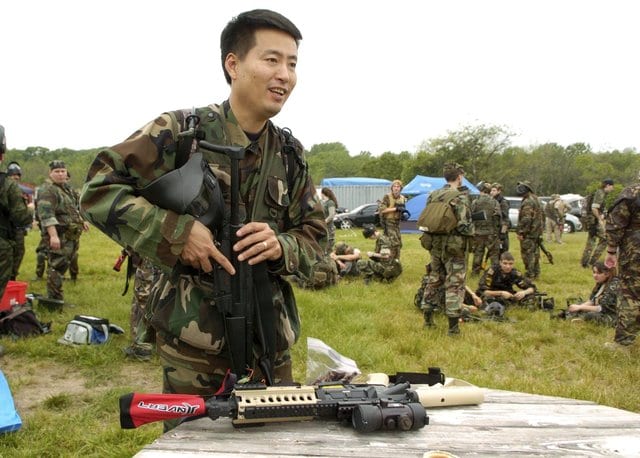 Michael Kim prepares for his first airsoft game. Many participants have military or law enforcement experience and play to keep their skills sharp. (Photo credit: The Washington Times)

Everyone who knows anything about guns, even those who don’t, has surely heard about ammo shortages in recent months. The supply dwindles while the demand continues to rise, due in part to the growing threat of federal regulations on guns, magazines and ammunition. But as a San Francisco CBS affiliate reports, the shortage isn’t just limited to civilians. Some California police departments are also short on training ammunition and have therefore had to come up with alternative measures. One such idea is the use of professional grade airsoft guns for training.

Lt. Louie Tirona of the Richmond Police Department said, “Everybody is fighting for what seems like a shrinking amount of ammunition out there. If we get to a situation where we’re low on ammunition, we can do simple drills with airsoft that would mimic what we would do with live fire.”

In addition to using the airsoft guns, the Richmond Police Department is also incorporating the use of laser guns for scenario training.

The neighboring police department of Albany has also turned to the readily available and cost effective use of airsoft. Sgt. Dave Bettencourt of the Albany Police Department said, “It’s become harder and harder to get the ammunition we need to train our officers on a timely basis. We’re using airsoft as an affordable option to try to maintain the officers’ skills.”

Other nearby departments in El Cerrito, Emeryville and Berkeley also told the local news affiliate that while they currently have enough ammunition for regular patrol duty, they are actively searching for more training ammo.

While the thought of police departments not having a sufficient supply of ammunition may be unsettling to some, the use of airsoft guns, at least for training purposes, does have several benefits. One state-level agency tactical team commander points out some obvious advantages: Safety, versatility and cost.

Although safety is still certainly a priority in training, even with the use of airsoft instead of live fire, airsoft still provides a safer training medium, especially for new recruits, as the airsoft pellets are non-lethal.

Airsoft guns are also versatile in the aspect that models can be found in a wide range of different types of guns, all for a fraction of the cost of their genuine counterparts. In addition, as Tirona points out, the cost of airsoft pellets compared to live rounds is literally “pennies on the dollar.”

Of course the use of airsoft for training law enforcement and military isn’t new. They have been used as an effective training tool for years, as the professional grade models can provide realistic replicas for training with the same advantages described above.