A teenager in West Virginia caused quite a stir on Thursday when he wore a T-shirt to school which displayed the NRA logo and a rifle. But even after being not only suspended, but also arrested for refusing to either remove the shirt or turn it inside out, he’s still not ready to back down. When he returned to school on Monday he was sporting the exact same shirt that caused the controversy to begin with along with many other students who wore similar shirts, in an effort to show their support.

After refusing to remove the shirt, 14-year-old Jared Marcum was arrested and charged with obstruction and disturbing the education process. He was also suspended for one day. Preceding the incident, he had no criminal record.

The teen now says that he feels he is fighting for not only his Second Amendment rights, but his freedom of speech as well.

The teen and his father reiterate that the entire issue was, in fact, over the T-shirt, not Jared’s behavior. Both maintain he did not become aggressive in any way and that he simply refused to take the shirt off. The father worries about what a criminal record could do to the teen’s future.

However, according to the school, it’s just the opposite, and the arrest and suspension were due to Jared’s disruptive behavior, not the shirt.

The T-shirt did not clearly violate the Logan County School District’s dress code, which prohibits clothing that displays profanity, violence, discriminatory messages or sexually suggestive phrases. The policy doesn’t state anything about images of guns or gun organization logos. In fact, in the school’s own parking lot stands a statue of a soldier carrying a gun and a grenade. 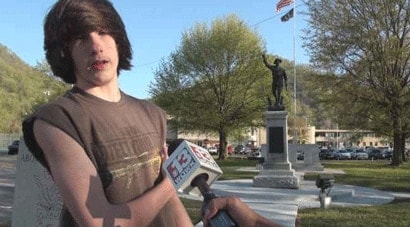 The family has hired a lawyer and plans to file a civil suit against the school officials involved in the incident, after the charges against Jared are cleared and his record is returned to as spotless as it once was.

The school declined to comment on the incident, although the school’s superintendent, Wilma Zigmond, stated, “It’s not, ‘No comment,’ it’s the fact that I just can’t discuss the student.”

The family and their lawyer have requested the surveillance footage of the incident which led up to the student being arrested. There is an ongoing investigation with the juvenile prosecuting attorney as well.