Why Use Gunpowder to Build a Bomb? 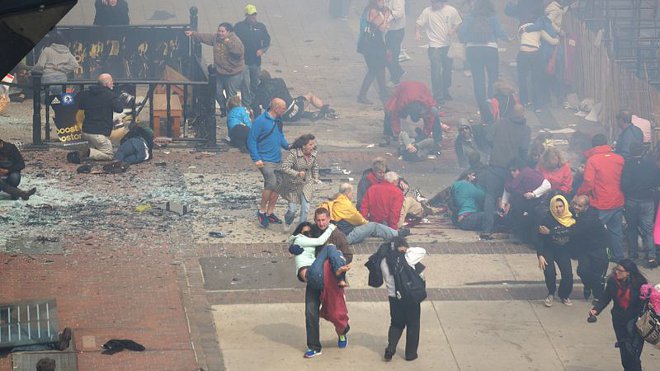 While few of the details surrounding the Boston Marathon bombings are well-known or well-understood, it is widely-held that the bombs were a common type of IED made filling a pressure cooker with explosives and shrapnel.

Being composed of such easy-to-obtain components, pressure cooker bombs have gained a lot of popularity with bombers around the world. And here in America, where you can buy gunpowder and black powder with ease, it was only a matter of time before some would-be terrorist would use the pressure cooker method to do harm.

As devastating as the attack was, we have to remember that pressure cooker bombs are inefficient. And that if this was a gunpowder-based bomb, we, and many of the victims of the Boston Bombing are — in a sense — lucky that the bombers did not lay hands on more powerful explosives.

Gunpowder, even though it is largely more energetic than black powder, is still considered a low explosive. The pressure cooker helps contain that explosive energy for a fraction of a second, causing that energy level to spike, to get better combustion of the fuel, but even then it’s a far cry from other explosives, including ANFO, more commonly recognized as the diesel and fertilizer mix used for the Oklahoma City bombing and before that, the 1993 attempt on the World Trade Center.

Just a few days ago the town of West, Texas, suffered a massive disaster when compounds mixed at the West Fertilizer Company storage and distribution facility exploded, killing 14, injuring 160 and damaging or destroying at least 150 buildings. The explosion powered a tremor the equivalent of a  2.1-magnitude earthquake.

The use of gunpowder does have one advantage over other types of explosive: bomb dogs are not always trained to sniff it out, as other bomb components are much more common.

As a result, Sen. Frank R. Lautenberg (D-N.J.) has already re-introduced a bill that would require people to undergo background checks when buying gunpowder or black powder.

“It is outrageous that anyone, even a known terrorist, can walk into a store in America and buy explosives without any questions asked,” said Lautenberg. “If we are serious about public safety, we must put these common-sense safeguards in place.  While the police have not revealed what specific explosive materials were used in Boston, what we do know is that explosive powder is too easy to anonymously purchase across the country.”

Leaving these terrorists with only better alternatives? Regulating the sale of reloading components will have as much leverage on bomb-builders as Massachusetts’ tight gun control had on preventing the Boston bombers from illegally arming themselves with firearms: it won’t do anything.

Others are calling for immigration reform, for increased scrutiny surrounding potential citizens and visitors. That overlooks the fact that the bombers were radicalized here, domestically and immigration reform obviously doesn’t work on home-grown terrorists.

We do have one tool in the kit that works across the board. Intelligence and investigation. What’s upsetting is how for Boston and the rest of the nation, it failed in this case.

It would be one thing if the bombers were a perfect pair of sleepers that switched on when the calendar hit 2013. But that’s not the case.

Last November, Russian security officials sent word to the FBI to inform them that Tamerlan Tsarnaev was in contact with a suspected terrorist cell in Dagestan six months ago.  Our War on Terror has brought warrantless wiretaps, domestic drones and a militarized police force, but apparently not letter openers because the message was not received.

House officials have started an investigation to find out what was in the file on Tsarnaev supplied to the FBI. McCaul, (R-TX), said the incidents “Raise the most serious questions about the efficacy of the federal counter terrorism efforts.”

Still, it’s entirely possible that the FBI was engaged in a proper investigation on Tsarnaev and his cohorts and they simply slipped the noose.

Because there’s one thing we have to learn to accept: no matter how much time, effort and money we throw into rooting out terrorists (and making all the legal and civil sacrifices that level of security necessitates) we’ll never be able to prevent them all. Marathons get bombed.

Security expert Bruce Schneier says it best. “There are things we can do to make us safer, mostly around investigation, intelligence, and emergency response, but we will never be 100-percent safe from terrorism; we need to accept that.

“Don’t glorify the terrorists and their actions by calling this part of a “War on Terror.” Wars involve two legitimate sides. There’s only one legitimate side here; those on the other are criminals. They should be found, arrested and punished. But we need to be vigilant not to weaken the very freedoms and liberties that make this country great, meanwhile, just because we’re scared.

“Instead, be indomitable — and support leaders who are as well. That’s how to defeat terrorists.”