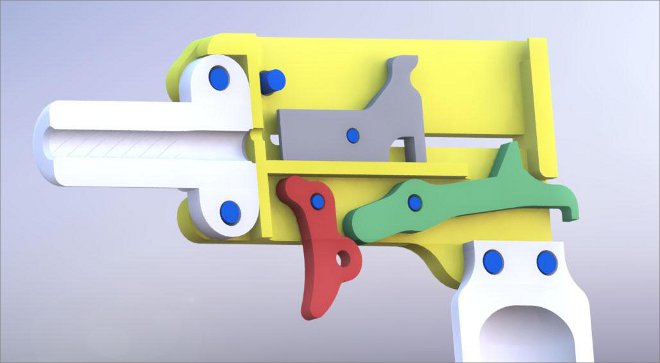 Defense Distributed, the anarchical 3D printing organization led by Cody Wilson, a student at the University of Texas School of Law, is gearing up to release the plans for a handgun that can be completely 3D printed, except for the firing pin.

The social and legal implications for this are hard to encapsulate at this point, let alone the technical ones.

At the recent Inside 3D Printing conference, Wilson announced that his organization was gearing up to unveil the first Wiki Weapon, a (nearly) completely 3D-printed firearm sometime in the coming two weeks.

Their previous efforts focused on making a 3D-printed receiver for an AR-pattern rifle, and then using commercially-produced parts to complete the firearm.

Their first receiver was a bust, but with some tweaks they eventually developed a receiver that could be used to complete an AR-15.

This new Wiki Weapon is a far cry from 3D printing one part and saying they’ve made a gun. This all-original design may not use any commercially-produced parts at all, except for a few things like springs, pins, screws and as mentioned, the firing pin.

The use of a metal firing pin is not just a technical necessity, but a legal one. The Undetectable Firearms Act of 1988 prohibits the manufacture of any guns that can’t be spotted by a metal detector or X-ray. They’re cutting it a bit close on this one.

“We’re gonna be flirting with the edge of detectability,” said Wilson.

Defense Distributed landed a federal firearms licence earlier this year, putting to rest any fears that they might somehow wind up in legal hot water for manufacturing guns, but they still can’t legally make a gun entirely out of plastic.

Wilson’s design uses 12 3D-printed ABS+ parts, ruling out a mechanically-complex design. Given that the barrel, breech face and chamber are expected to be included with these polymer parts, it’s hard to believe that the design will hold up to a lot of use, no matter what Wilson says.

And it’s not likely that it will fire a powerful cartridge. We’ll be surprised if it’s anything other than a .22, although there are some other soft-shooting cartridges that could work, if the design is overbuilt enough. Earlier this year DEFCAD, Defense Distributed’s file-hosting website, added a design for a simple single-shot pistol.

“‘There will be a gun that will be able to shoot a bullet,’ Wilson said to Mashable. ‘That’s over. There’s no way of ever stopping that.’

“So what happens in two weeks, after that gun is printed, and its design file is uploaded on the Internet for everybody to download?

“Wilson shrugged. ‘I don’t know what’s gonna happen after that. Probably, a lot of bad things,’ he said, and after a pause, he clarified, matter-of-factly: ‘I mean to me, I don’t even mean to the world.'”

Of course, manufacturing guns at home is far from illegal. It’s a popular and growing hobby. It’ll be interesting to see if the Wiki Weapon will be in any way superior to say, this shotgun made from a stapler and some pipe, and if the 3D printer skills will be easier for the home gunsmith to master than a vice and a welder.

What is for certain is that this will draw a lot of attention to Defense Distributed, for better or for worse. And that as the technology is explored and improved, it will change the way people think about certain types of gun control.

Our money’s on that single-shot .22. What do you think the Wiki Weapon will look like?