From Tourist to Terrorist: Or what not to do while traveling between states with a CCL On Saturday, 59-year-old Bobby Glen Jackson, who does security work as a side job, was arrested in his hometown of Fayetteville, North Carolina, and scheduled to be extradited to New York on Monday to be charged with criminal possession of a weapon and reckless endangerment.

When Jackson, a concealed carry permit holder in North Carolina, took a trip with his wife and daughter to the World Trade Center, he made a decision that quickly turned him from typical tourist to suspected terrorist: He carried his pistol with him to New York.

According to The New York Times, while waiting in line to enter the National September 11 Memorial and Museum, Jackson noticed a sign that read, “Prohibited Items” and had a silhouette of a handgun. He then asked a memorial employee, “whether law enforcement or police officers off duty were allowed to enter armed,” to which the employee answered no. Jackson stepped out of line and returned a few minutes later.

However, before he returned to the line, he stowed his loaded pistol under a couch cushion in the lobby of the World Center Hotel, which is right beside the entrance to the memorial.

He proceeded with the tour, then returned to retrieve his gun about 30 minutes after hiding it. Only the gun was not there and he did not report it missing. 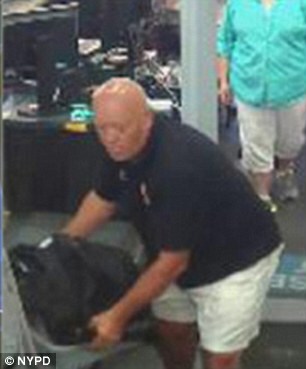 A screen capture of hotel surveillance video of Bobby Glen Jackson, distributed by the NYPD.

While on his tour, a woman had sat down on the couch, only to discover the loaded handgun sitting beneath her. She informed a hotel employee, who immediately called police. What’s worse is that the gun was discovered at almost the exact same time that the bombings in Boston occurred. So naturally, authorities assumed the worst, feared that the two were connected, and that a New York attack was impending.

Thankfully, there was no attack on New York, and the suspected terrorist turned out to just be a gun owner who had made a very poor, albeit terrible, decision.

Anybody who has watched even a snippet of the news in the last six months knows that New York is not considered a gun friendly state. In fact, New York has some of the toughest gun laws in the country, and they have recently become tougher.  Traveling between states can be difficult for concealed carriers as laws differ tremendously by state.

For example, in some states, such as Vermont, no permit is needed to carry a concealed weapon. While other states, such as Illinois, do not issue concealed carry permits and do not allow concealed carry of any type. North Carolina honors any permit or license issued by any state, while New York refuses to honor any permit or license from any other state. Still there are other states that only honor certain other states’ permits, not necessarily any or all of them. In other words, just because a gun is legal in one state doesn’t make it legal in all states. And the fact that the state of New York refuses to honor any outside permits is a fairly good reason to educate yourself about state laws if traveling from state to state with a firearm.

Because Jackson either didn’t take the time to learn what the laws are, didn’t care, or just simply forgot about carrying, he is now facing criminal charges.

Of course, this hasn’t been the first time that the state of New York has gone after gun toting tourists either. In 2011 Meredith Graves, a Tennessee nurse and med student, was arrested in New York after asking a police officer outside the same memorial where she could check her firearm.

Also in 2011, Ryan Jerome, a former Marine and jeweler from Indiana, was arrested with a felony charge after attempting to check his pistol with security guards at the Empire State Building.

Tea Party Patriots co-founder, Mark J. Meckler was arrested at New York’s La Guardia Airport in 2011when he attempted to check a gun, secured in a lock box, with a Delta Airlines ticketing agent.