Andrew Kitzenberg who lives on Laurel Street, in Watertown, Mass. was in home last Friday morning when gun fire erupted outside his window at 1 a.m. Immediately grabbing his camera, Kitzenberg ended up documenting in great detail the shootout Boston Marathon bombing suspects Tamarlan and Dzhokhar Tsarnaev had with the police. 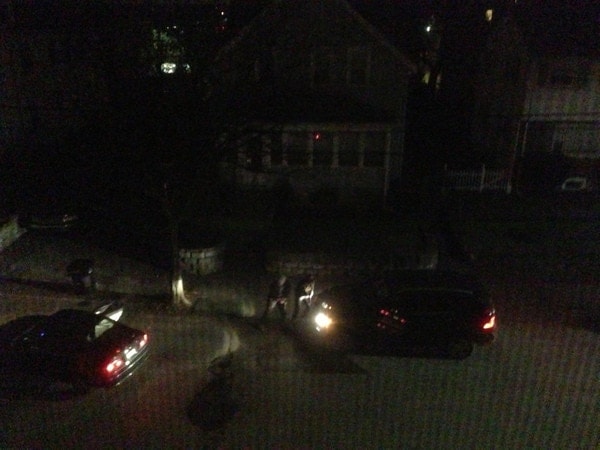 Here are the two brothers taking cover behind the black Mercedes SUV and shooting towards Watertown Police officers. (Taken at 12:46:11AM) 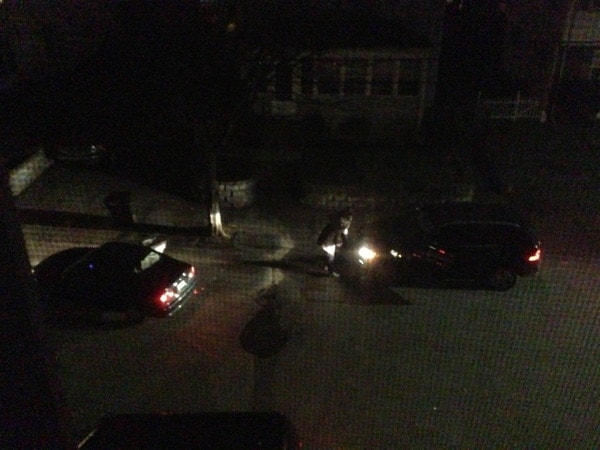 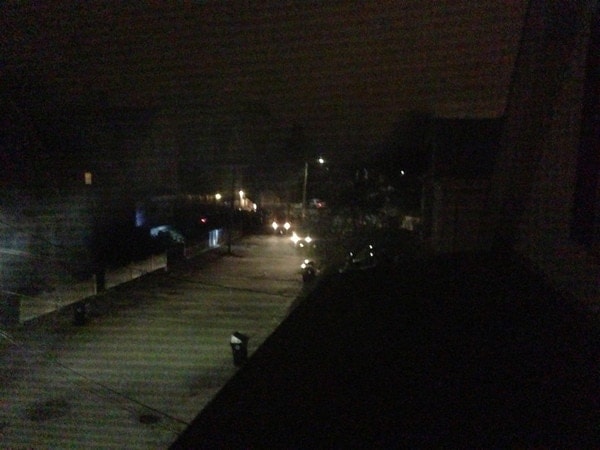 This is a view from the west-facing window in my bedroom and at the end of the block (Laurel St.) you can see multiple police vehicles. These vehicles were about 75-80 yards from the shooters. (Taken at 12:46:25AM) 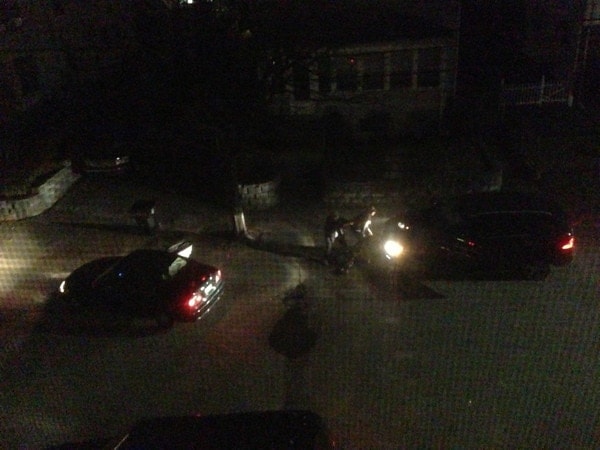 Here it’s clear to see the brothers taking aim and firing on the officers. (Taken at 12:47:57AM) 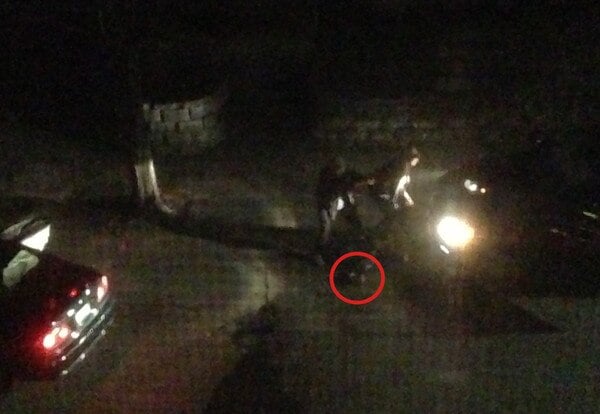 This is a zoomed in view from the last image. The red circle highlights the pressure cooker bomb that was used just moments after this photo was taken. The use of this explosive created an enormous cloud of smoke that covered the entire street. While the street was still cloudy with smoke one of the brothers started running down the street towards the officers, while still engaging them in gunshots. As he got closer to the officers, within 10 -15 yards of them he was taken down. From my vantage point I did not see whether he was tackled to the ground or brought down by gunshots. 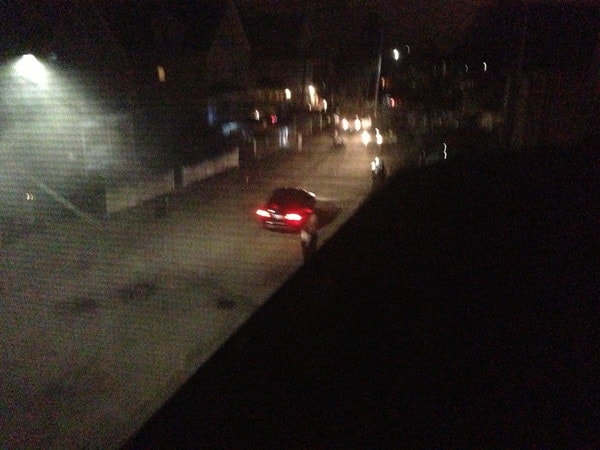 As the one brother was running toward the officers the second got back into the SUV, turned it around in the street and proceeded to accelerate at the vehicle barricade. This image shows the black SUV charging the officer vehicles. (Taken 12:50:57AM) 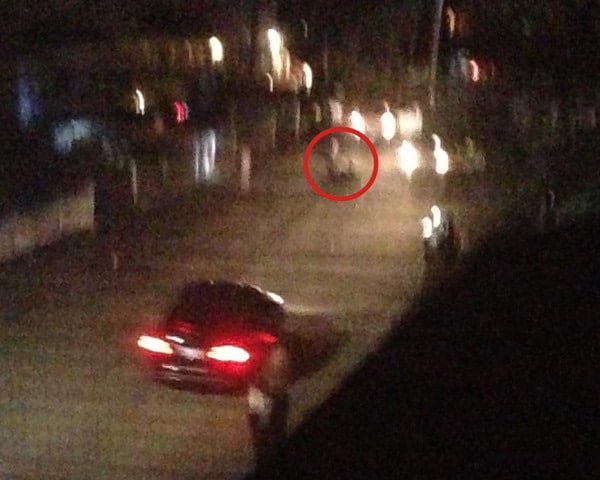 This is a zoom-in from the last image and the red circle highlights where one of the brothers was taken down and still laying in the street. The black SUV proceeded to accelerate towards the officers and drove in between the two cars at the top of the picture. The SUV side swiped both cars taking out doors and windows and ultimately broke through the vehicle barricade and continued driving west on Laurel St. This was the last I saw of the black SUV. 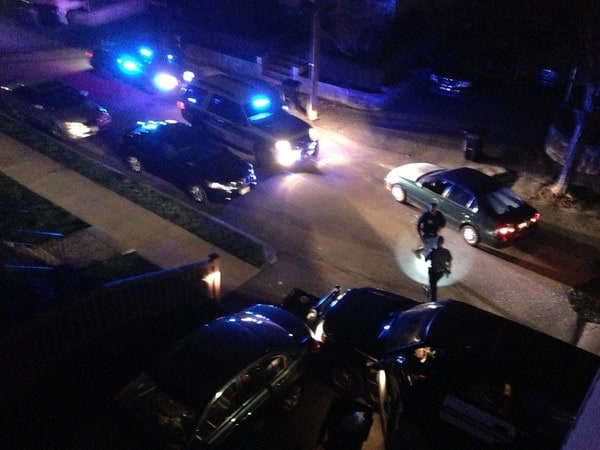 This image was taken from the east-facing window. As soon as the black SUV had left the street officers rushed toward the green sedan and the spot of the shooting. As soon as officers got to the vehicle they started alerting all others on scene that there were “IEDs” on the street and for everyone examining the scene to clear the entire street. Also pictured at the bottom of the image is a Watertown Police SUV that had crashed in our driveway at the start of the gunfight and had many of its windows shot out. (Taken 12:57:52AM) 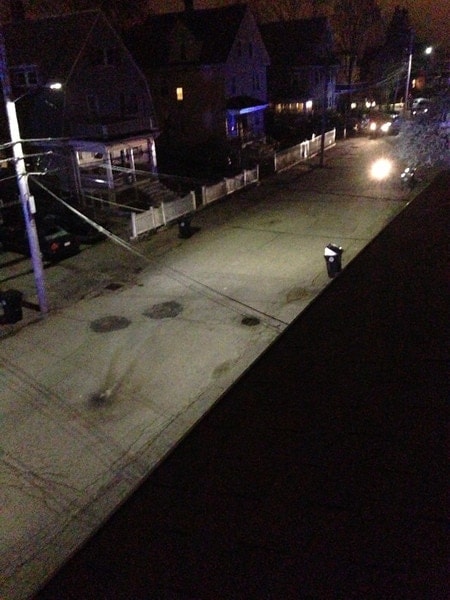 At the bottom of this image is the blast mark from the pressure cooker bomb that exploded in the middle of the street. At the top of the image, the bright light is a bomb detecting robot that was moving toward the blast mark. (Taken at 1:20:10AM) 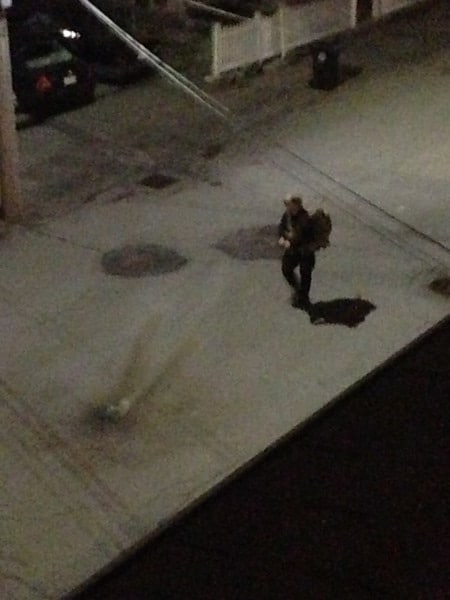 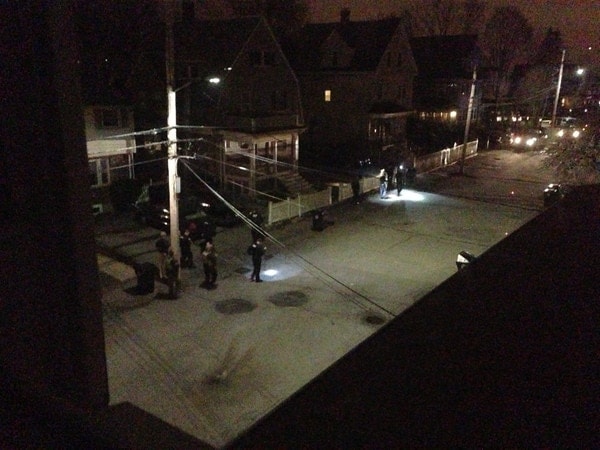 Here heavily armed agents are still in search of the suspect on Laurel St. (Taken 2:14:54AM) 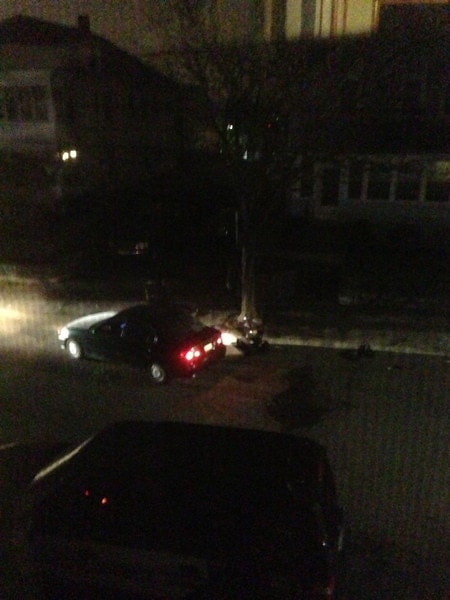 Here is the bomb detecting robot inspecting the vehicle from the back right passenger seat. (Taken at 2:49:19AM) 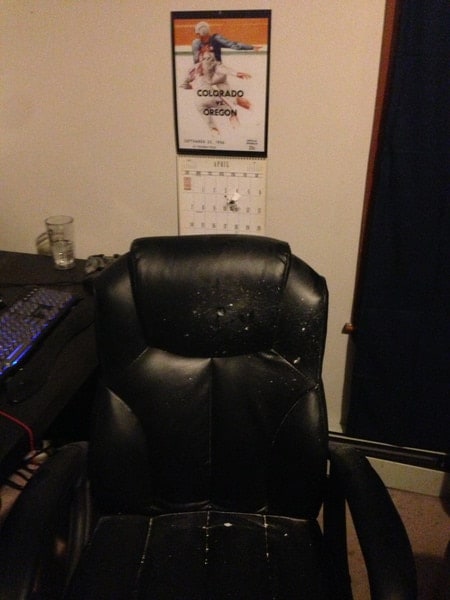 After shooting had stopped my roommate found a bullet hole that penetrated his west-facing wall and continued to pierce through his desk chair. His room is on the 2nd floor corner of the house, closest to the street, with west and south facing walls 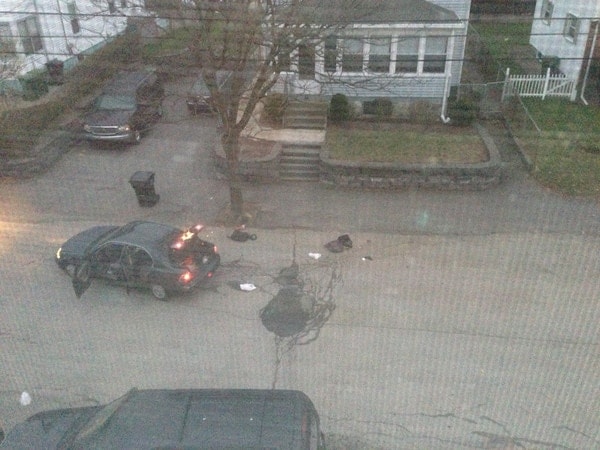 The bomb squad had finally inspected the entire vehicle and all the backpacks beside it and have cleared the area. (Taken 5:45:25AM) 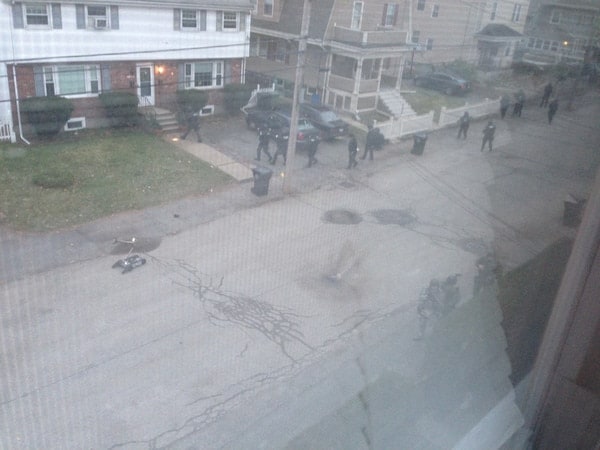 Armed Agents searching and evacuating all homes on Laurel St. They evacuated ours shortly after this photo was taken. (Taken at 6:01:17AM)