Let’s go back a bit.  In the nineteenth century, the revolver was the go-to handgun for military, law enforcement, and self defense.  But the old black powder beasts (and the cartridge conversions that would follow) required some manual manipulation.

In order to fire, the hammer had to be cocked.  This mechanical process usually required that a shooter physically pull the hammer back before pulling the trigger on the next round. 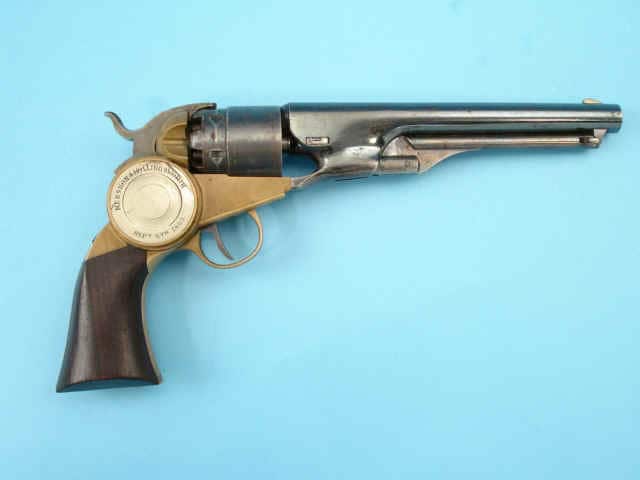 We call this single action, and it is still with us.  In revolvers, though, single action guns are mostly nostalgic reminders of the glory days following the Civil War.  Single action pistols are a different story.

As soon as the single action revolver was perfected, detractors began looking for a way to revolve the cylinder and cock the hammer that didn’t require use of the thumb or free hand.  Enter the double action.  Pull the trigger and the cylinder turns, locks, and the hammer falls.  Problem solved?

Maybe not. The British worked out the double action.  The Adams Revolver worked decently well and was double action only.  Pull the trigger and the gun coked and fired.  But it wasn’t exactly smooth. 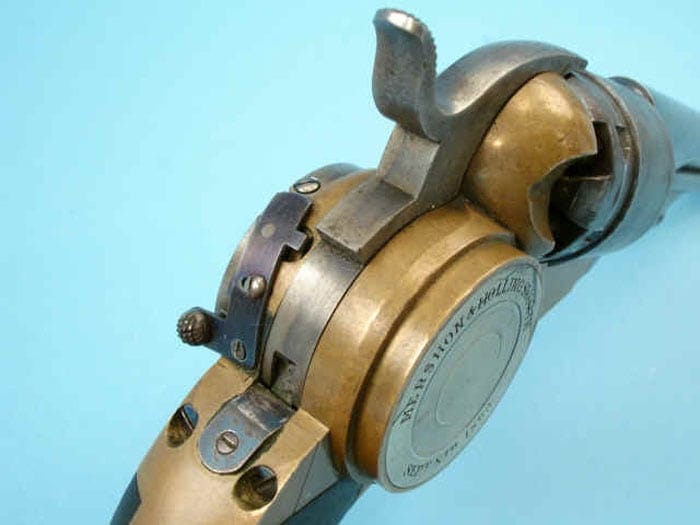 This was a problem for Mershon and Hollingsworth.  The sang the praises of their own invention by setting against the new double action developments.  This is from their patent application.

“To pull the trigger [on the Self-Cocking Revolver] requires no greater effort than in any arm cocked by hand, nor does the trigger require any longer sweep.  Hence it admits of an accurate aim, not subject to be defeated or disturbed by a violent muscular exertion in pulling the trigger.  In this very important particular consists its great superiority over all other self-cocking arms, all of them requiring so much muscular effort in pulling the trigger as to wholly defeat or disturb the aim and object of an arm, except at very close quarters.”

In other words, the Mershon and Hollingsworth doesn’t have the hefty trigger pull of a double action.

The gun itself is simply an 1860 Colt.  Black powder.  Percussion cap.  Front loading single action.  Glorious.  Mershon and Hollinsgworth rebuilt the frame to include a wind up mechanism that would cock the hammer and turn the cylinder.  I’ll refrain from breaking down the intricacies of the mechanism. 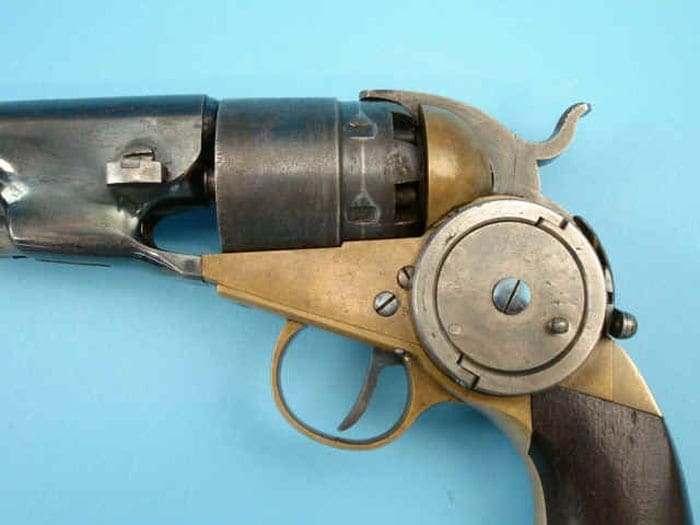 But here are the basics.  The “reservoir” is wound like a clock.  The enclosed spring applies the power needed to rotate the cylinder and cock the hammer.  After firing, the shooter releases the trigger which starts the process.  The gun readies itself to fire again.  The gun can be fired very quickly.

Again from the patent application, which spent a good bit of its energy justifying the need for the new action:

“Sportsmen greatly prefer an ordinary double-barreled gun to one of the repeating or revolving kind that requires cocking by hand before each discharge, for the reason that the hammers of both barrels may be cocked and ready to discharged s rapidly as two triggers can be pulled, which insures them two shots without removing the piece from the shoulder or disturbing the general line of sight, while with an ordinary repeating gun they could have but one, because after each discharge the piece must come down from position, be cocked, and relieveled before it can be again fired.  But an arm that possesses the ability to perform the office of cocking the hammer, liberate, rotate, and lock the chambered cylinder without requiring any other manipulation than the simple one of letting go the trigger after it has been pulled to discharge the arm must be vastly superior to all arms that require the working to be done by hand.”

Ahead of its time

The Mershon and Hollingsworth clearly was a sign of things to come.  And it wasn’t the last attempt at an automatic revolver.  The Brits were at it again around the turn of the century with the Webley Fosbery, which used recoil energy to slide the barrel and cylinder back (which in turn, cocked the hammer). 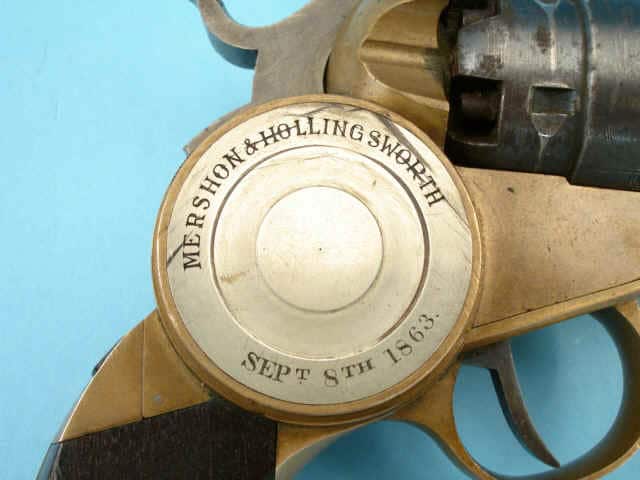 But the problem the Self-Cocking Revolver was meant to solve simply wasn’t much of a problem.  It takes very little effort to operate a single action revolver.  It takes more effort to wind the springs of the Mershon and Hollingsworth.

The effort put into the Mershon and Hollingsworth might just as well have been spent elsewhere.  Though few could forecast the advent of the automatic pistol, the very design of the Colt 1860 was being made obsolete by the growing use of brass cartridges.

But the invention itself had nothing to do with the design of the gun.  Mershon and Hollingsworth’s choice of the 1860 seems almost arbitrary in hindsight.  Their action could be retrofitted on any revolving firearm.  And that was the point, however misguided.

In 1863, the world was ready for a revolution in firearms design, but it came in the form of brass cartridges, lever action rifles, and Gatling guns.  The bastard offspring of a revolver and a pocket-watch received very little attention.

Instead, Colt pushed on with the Peacemaker and further refined the double action/single action in guns like the Colt Lightning and Thunderer.

And so the Mershon and Hollingsworth Self-Cocking Revolver became little more than a historical footnote.  It went the way of so many odd inventions.  It is still in existence, and is rumored to still work (though the spring has lost some of its snap).

Here are the Patent drawings. 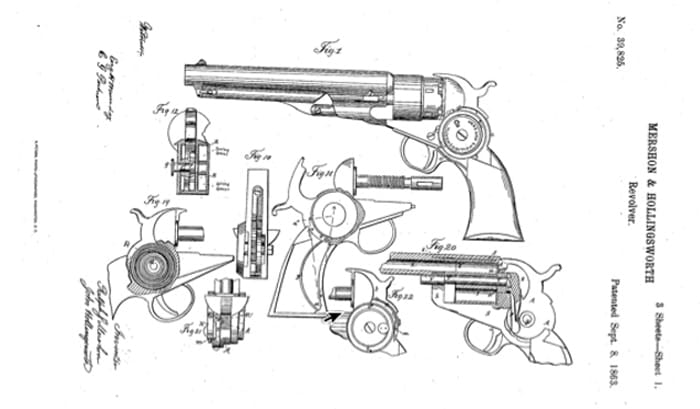 From US Patent #39,825 Mershon and Hollingsworth Self-Cocking Revolver 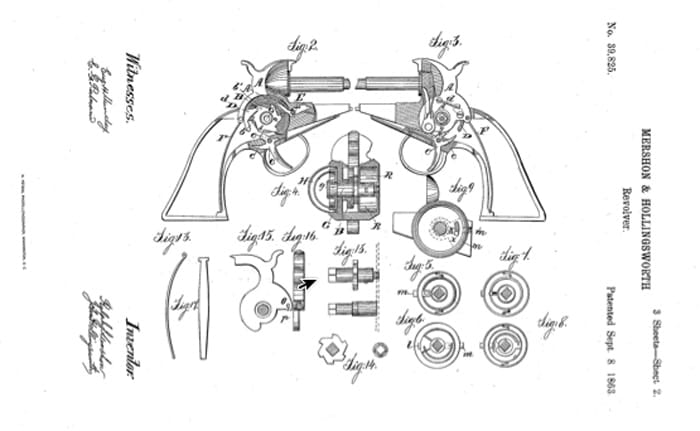 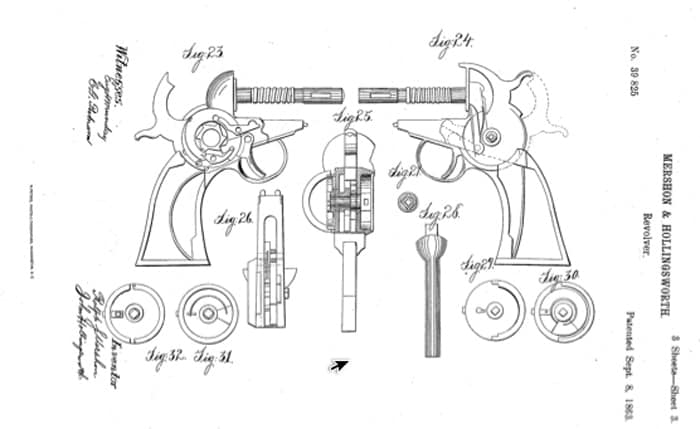