Texas Man Tries to Attack Others with Bat, Gets Shot with Shotgun (VIDEO) 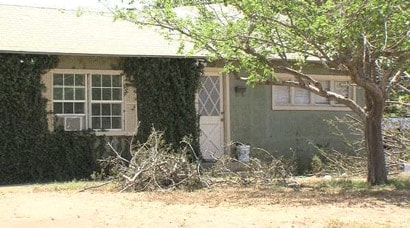 Residence where a Texas man was shot and killed after a late-night argument escalated. (Photo credit: News West 9)

A Texas man shot and killed his neighbor who broke into his home and tried to attack him and his guests with a baseball bat Tuesday night.

According to a local news report, police said they were called just before midnight to a home in Midland, located in west Texas about 50 miles from the New Mexico border.

Police said that the parties involved had friends over that night and they had all been outside in the street arguing and yelling at each other before becoming physical. But once the fight broke out, one group of people tried to avoid any further altercations by retreating into the residence.

However, 32-year-old Samuel Pompa, who lived on the same plot but in a different house, arrived to the home a short while later, armed with a baseball bat. Pompa then proceeded to kick the door in. At that point, 19-year-old Jonathan McDaniel, fearing for his own safety and the safety of others inside, grabbed a shotgun and shot Pompa once in the chest.

Pompa was transported to a local hospital where he later died from the gunshot wound. A routine autopsy is scheduled to be conducted.

No arrests were made after the incident and no charges are expected to be filed against McDaniel, who police said was acting in self-defense. However, an investigation is ongoing and police said that they’re looking into it as a homicide. Once the autopsy has been completed, the case will go to the District Attorney’s office.