Will Arkansas be the fifth state to enact ‘Constitutional Carry?’

Earlier this month, Arkansas Gov. Mike Beebe signed into law Act 746, previously known as the bill HB1700, which will take effect in July. Some are interpreting the Act as “Constitutional Carry,” while others aren’t so convinced.

The Act, which received only one “nay” vote from over 120 legislators, made two small, yet potentially major changes in relation to Arkansas’ gun laws: It defined “journey” and “intent.” And although these changes don’t specifically allow for open carry, it doesn’t blatantly prohibit it either, which people across the Natural State are all interpreting completely differently. While Arkansas has certainly had some Second Amendment victories lately, not everyone is taking Act 746 as one such victory.

The first thing the Act did was define “journey,” which now, according to the new Act, is defined as traveling “beyond the county in which the person lives.” Arkansas law allows residents to carry a firearm unobstructed, without a license, provided the resident is on a “journey.” Previously, residents could interpret this as a right to carry, concealed or openly, with the thinking that they were always on a “journey.” The term was vague and open to exploitation. The new Act brings legal clarity to what is considered a journey in the state.

The second thing the act did was to more clearly define intent in relation to carrying a weapon. As the law formerly read, it was considered an offense to carry a handgun with the purpose of using it against another person, which could be read to include those carrying a handgun for self-defense. Act 746 specifically defined that it would be such an offense only if the handgun was carried “with the purpose to attempt to unlawfully employ the weapon against another person.” Self-defense was made an exception since defending oneself is not unlawful in the state of Arkansas.

The gun rights advocate group Arkansas Carry published a news release Wednesday, celebrating what they consider a victory within the gun rights community. The release states that Arkansas will become the fifth state in the country to enact “Constitutional Carry,” which is defined as a state that has no laws that generally restrict the carry of handguns for self-defense.

According to Arkansas Carry, “This technical change decriminalizes the carry of handguns for self-defense purposes, and puts the burden upon a prosecutor to prove criminal intent of a person carrying a handgun. Also, there are no specifications whether a legally carried handgun should be carried openly or concealed; thus it is considered Constitutional Carry by Arkansas Carry and the gun owners of the state.” 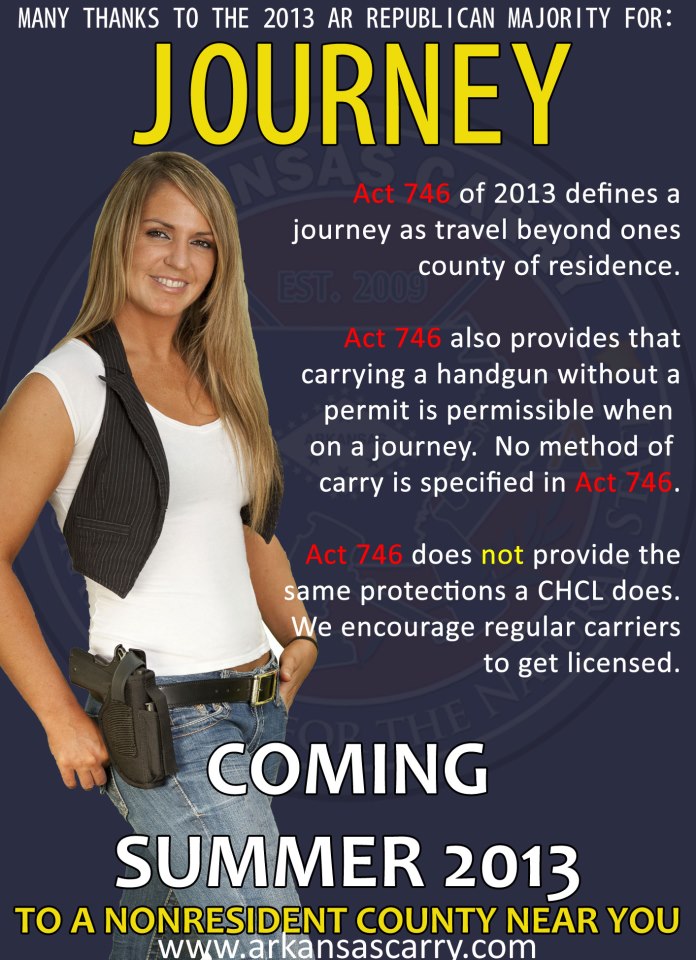 Of course, not everybody agrees with Arkansas Carry’s interpretation of the law. The Governor’s spokesman Matt DeCample states that the interpretation was just that of a single group and should not necessarily be taken as fact. DeCample emphasized that Beebe, who has opposed open carry in the past, did not sign the law with the understanding that it could be interpreted as allowing people to openly carry firearms in public places.

However, Nicholas Stehle of Arkansas Carry disagrees. “Well, the law is pretty clear: a prosecutor has to prove that the person carrying the firearm meant to use it unlawfully. Before this Act, they just had to prove you meant to use it against a person, which included self-defense. There aren’t many ways to interpret this. Whatever the Governor’s interpretation, that doesn’t change what the law actually says.”

But given the fact that gun rights advocates presumably predicted that the interpretation of the law would be tested, Arkansas Carry plans to get rulings on the law as soon as possible so that they may send opinions and educate local law enforcement agencies about the law, according to Arkansas Carry chairman Steve Jones.

It came as quite a surprise that Act 746 actually made it all the way to the Governor’s desk, seeming how HB1408, which would have allowed for rural open carry in Arkansas, was defeated in February.

Nic Horton of The Arkansas Project said that, “Perhaps some legislators did not know what they were voting on.” While it seems unlikely that the legislators blindly voted to pass the bill, what Horton may have been referring to was the interpretation in the wording.

When asked why he thought Act 746 passed after HB1408 had been defeated, Jones explained, “I believe Act 746 passed because most legislators read it as not changing the offense of carrying a weapon. Most Arkansans have a wrong mindset that basically the carry of a handgun is illegal, and for the ban to be lifted, the legislature must specifically ‘allow’ defensive carry. However, Denny Altes simply added three words that decriminalized defensive carry while still punishing the carry of a gun with the intent to use it against a person. Without language that specifically allowed carry, I believe most lawmakers did not understand the power of the three words.”

Act 746 doesn’t expressly allow open carry, but it doesn’t deny the right either. It just simply doesn’t address the issue, which may prove to be an issue later if the law is tested by a resident willing to take that chance.

Within Arkansas Carry’s own press release they recommend consulting with a lawyer before carrying a firearm in public, even after the law goes into effect later this summer. Nicholas Stehle points out the necessity of such a disclaimer. “Arkansas Carry doesn’t have a full-time lawyer on staff, and we really don’t want good people getting arrested since we can’t defend them. We just want to be overly cautious.”

Even Arkansas’ own Attorney General’s office declined to comment on the law, stating that they were prohibited from engaging in any speculative interpretation of specific laws.

With no clear definition, the Act still leaves the question of whether or not Arkansas will, in fact, become the fifth state to enact “Constitutional Carry.”