Before I seem like a completely heartless bastard, one who watches the suffering of others and says, “now I’ll never be able to buy any .22LR,” I would like to assure you that this wasn’t my first thought. 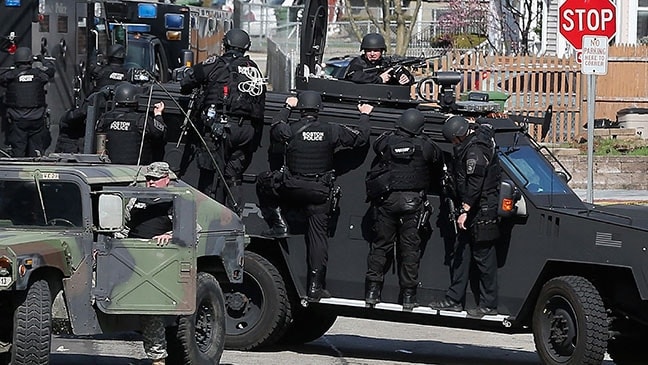 I watched the horror unfold in Boston with the mix of nausea and revulsion I feel all too often now.  But as the details about the bombings came to light, and then the shootings and really incredible manhunt that followed, I did think about how Americans were going to react.

We all know what happened.  Two jackasses blew up improvised explosive devices at the Boston Marathon.  What started with black powder and kitchenware ended with guns and pipe bombs.

But I’m less concerned about cookware than I am ammo.  And there’s no way that the Boston tragedy won’t be spun into an argument against guns. 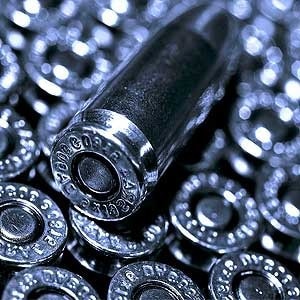 What do these have to do with pressure cookers?

Its all about timing

Two weeks ago, I was signing a completely different tune.  I’m talking about the solid thrashing delivered to the potential gun legislation.  I watched the votes come in like some of my friends watch the NFL draft.  As the political winds shifted, I quietly celebrated common sense’s victory.

Now?  I’m not so sure.  We all know that the defeat of federal firearms legislation meant that bans on various guns and ammunition are less likely, at least at the federal level.  Yet there’s a new question: will the fear of domestic terrorism cause even more people to buy guns and ammo (if they can find any)?

The answer may be phrased in the form of a question: how can we tell?

One way to guess is to listen to conversations coming out of the capital.  Fox News reports that the Department of Homeland Security is facing scrutiny for its huge ammo stores.  Like many of us, the Department of Homeland Security is legitimately concerned about domestic terrorism.  So they’re doing exactly what we are doing: they’re buying ammo.

Comparing that with the small-arms purchases procured by the U.S. Army, he said the DHS is churning through between 1,300 and 1,600 rounds per officer, while the U.S. Army goes through roughly 350 rounds per soldier.

Should we be shocked that DHS agents churn through 1,600 rounds each year?  Hell no.  We should be appalled that that the Army shoots only 350.  I consider that a travesty.

I’m glad the DHS is having to stand and defend their purchases.  But my concern has more to do with the type of ammo they’re buying, not the quantity.  Many of the rounds they’ve purchased recently are jacketed hollow points.

This isn’t target ammo.  Even if they say they’re buying this for training purposes, I wonder if they are telling the whole story.

I live a days drive from Boston, and I’m happy to report that we still have pressure cookers on the shelves.  The ammo shelves are still empty.  Some online retailers have some guns, and the private market seems to be humming along nicely, but there is absolutely nowhere near as many guns for sale now as there were back in early December.  But there’s nothing in my neck of the woods to suggest it is any different this week than it was last.  Or the week before.  Or the month before that. 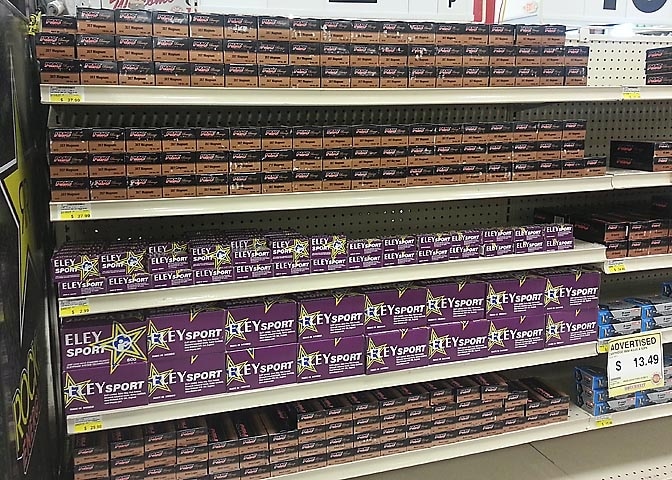 This is still a fantasy.

Rebel Sporting Goods, in Keysville, Virginia, is a simple mom-and-pop store that caters to central Virginia hunters.  Their stock of long guns and sporting shotguns is still robust.  But like everyone else, they sold off almost all of their pistols and black rifles before the end of the year.  Then they sold almost all of their revolvers.  Their ammunition supplies dwindled down to nothing.

The thing is, they had all of this last week.  They’ll likely have it all next week.

So what about the Boston bombings? 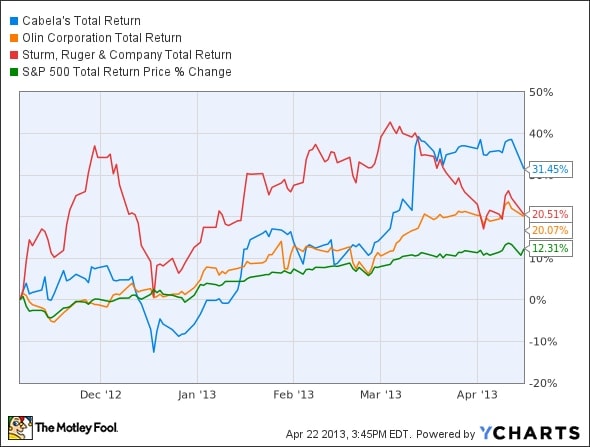 A graph of the recent stock values of some in the industry benefiting from the buying.

If we’re seeing any new sales as a result of the Boston bombings, they are blending in very well with what has been a steady stream of sales since Sandy Hook.

It hasn’t let up.  Prices have fluctuated, but the sales are steady.  Constant.  We’ve simply added a new, completely valid reason for our decision to own firearms.  We now have a very compelling reason to be prepared.

Our nation’s desire to be ready for the unknown, and our recent stock piling of ammo, has even earned a new nickname.  The bullet bubble.  This implies boom and bust financially.

But we haven’t yet seen the bust part.

We will eventually be able to point to April on some authoritative charts that track sales of guns and ammo, and the relative stock prices of the companies that make firearms and components.  But for now, we have to take the pulse of the nation the old fashioned way.

So what are you seeing?  Is it too early to tell if the well will run dry?  What does your gut tell you?