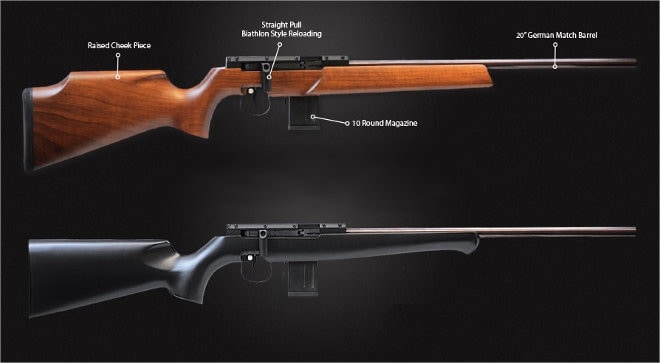 ISSC is gearing up their launch for their new strait pull-action target rimfire rifles for 2013. These sleek and simple rifles fill a shooting niche that is often overlooked by larger manufacturers and are priced to move.

Straight pull rifles are standard fare in competitive shooting circles, completely dominating biathlons and are often as expensive as rimfire rifles can get.

ISSC is poised to take a bite out of the entry level of the competition market with these SPA 22/17 rimfires. All of these models have very approachable pricetags. Gallery of Guns got a sneak peek at the new rifles.

The least expensive is the synthetic stock model. It has a nice, straight stock with a swept handguard and a less aggressive pistol grip. It’s a basic setup that should work in just about every type of shooting situation, whether it’s at a bench rest, having fun at the range or in the field taking game or controlling varmints. It runs just $489 in .22 LR and $499 in .22 WMR and .17 HMR.

The third and priciest model is the tactical version, with a fully-adjustable folding thumbhole stock. The buttstock also includes an adjustable monopod.

These models are all designed to be used with optics. We hope to see options with iron sights in the future, but we can’t disagree with the prices.

We also want to see an adjustable trigger; from the factory, these have five-pound triggers which are a bit on the heavy side for target shooting. Of course, if this proves to be an accurate and reliable platform, it’ll be no time before Timney or another aftermarket trigger manufacturer steps in to make things right.

The rest of the features are the same across the board. They have match-grade 20-inch barrels, feed from 10-round detachable box magazines and use the same straight-pull action that allows you to shoot without having to take your eyes off the target. At 7.84 pounds, they thread the needle between having mass to help stabilize the rifle without weighing enough to quickly tire a shooter.

Legacy Sports, ISSC American distributor, expects to have these in-store sometime this May, and we’re thinking that if all goes well, these will make excellent target rifles for the shooter on a budget.

For more info, check out their product page.