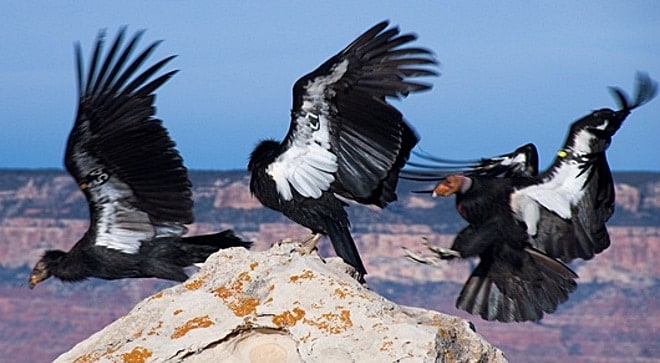 The California Condor is one of the most endangered, protected animals in the U.S. With barely more than 400 known to exist both in the wild and in captivity, California activists and legislators are once again considering banning the use of lead ammo for hunting.

This is because of the high rates of lead poisoning among the carrion-eaters; they have many times been poisoned by the lead left in animals unclaimed by hunters and varminters. Lead poisoning is said to affect several other species, including the golden eagle and the turkey vulture, but affects the condor in particular, as they eat more and have powerful digestive systems that quickly dissolves lead.

“We may see three to four golden eagles a year with lead poisoning. We see a fair number of turkey vultures with lead poisoning,” veterinarian Vicki Joseph of the The Bird and Pet Clinic in Roseville, Calif., told ABC News 10. “Usually, it’s by eating prey species that have lead shot in them.”

However, with many other leading causes of death for this endangered species including wind turbines, power lines and deforestation, it’s been debated that this will have little impact on the recovery of the condor. In 2007 California passed AB 711 which banned the use of lead ammo for hunting in the roosting and scavenging territories of the condor, but there are still cases of the birds dying from ingested lead.

The new bill, which is expected to pass, would expand AB 711 to the entire state. The Assembly Water, Parks and Wildlife Committee passed the bill 9-5. It will then pass on to the appropriations committee, then the legislature.

This follows AB 2223, which would have banned the use of lead ammo for hunting in 2010, which was shot down. The EPA similarly rejected a nation-wide lead ammo ban in 2010.

While hunters have shown mixed support for the bill, gun rights organizations are generally opposed to it, as it could be the thin edge of the wedge for larger gun control packages under the guise of conservationism.

Bird hunters have been using steel shot for decades in order to conserve waterfoul environments, but a state-wide ban of lead ammo would have a major effect on other types of hunters, both financially and as sportsmen, as lead-free ammo is expensive and in some cases less effective.

And although brass can be used to make ammunition as well, the ATF has recently classified many intermediate cartridges as pistol calibers, banning brass bullets by classifying them as “armor piercing.”

San Francisco recently passed a vaguely-worded Black Talon ban targeting the now-discontinued hollowpoints that may also ban other types of ammunition. The local law includes an open-ended banned ammo list that could be used to criminalize the possession of any kind of ammunition.

With these other bans in place, it’s not surprising that many gun rights advocates see this as a form of gun control, not wildlife management. It’s also questionable as to how enforceable such a ban would be.

Ryan Bronson of the National Shooting Sports Foundation told Opposing Views that “We have regulatory uncertainty. The potential exists for a de facto ammunition ban.”

If it were proven that banning the use of lead in hunting ammunition would help the condor recover and prevent lead poisoning among other scavengers, would you support it?