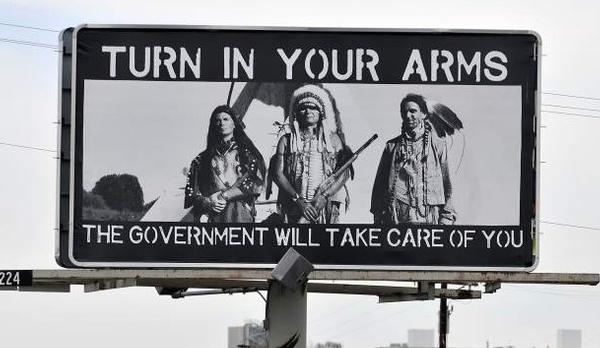 Two billboards with a Second Amendment message and an image of Native Americans is causing a bit of uproar and controversy in Colorado and generating buzz across the Internet. The billboards show three Native American Indians dressed in traditional Native American apparel with the words, “Turn in your arms. The government will take care of you.” The billboards are displayed at two different locations in Greeley, about 60 miles north of Denver.

The billboards are managed by Lamar Advertising in Denver. An account executive with the company, Matt Wells, told The Greeley Tribune that the billboard space was purchased by a group of local residents who wanted to remain anonymous. He did not share the amount for which it was purchased either.

Some residents are livid about the billboards, although Wells states that they have not received any complaints.

Irene Vernon, a Colorado State University professor and chairwoman of the ethnic studies department, as well as a Native American, expresses that the billboard doesn’t accurately portray the sufferings that the Native American people endured. According to The Denver Post, she said that it wasn’t as if the Native Americans just gave up their guns and were moved to reservations. Well, not exactly.

The Battle of Wounded Knee is perhaps one of the most infamous instances of oppression of the Native Americans at the hands of the U.S. government.

According to The Wounded Knee Museum, on Dec. 29, 1890, Col. James Forsyth, of the U.S. Army, aimed to disarm a band of Lakota at Wounded Knee Creek. When Black Coyote, a deaf Native American, hesitated to give up his rifle, which was of great value, a scuffle ensued and a shot from the rifle discharged. What followed was U.S. cavalrymen proceeding to slaughter up to 300 Lakota men, women and children, most of which were unarmed. This all occurring after the U.S. government had prohibited the Native Americans from practicing in their traditional “Ghost Dance,” as it was seen as an uprising and caused alarm among the white people. Following the Battle of Wounded Knee, Forsyth was charged with killing of the innocents, but was later exonerated. In addition, Forsyth was awarded the Medal of Honor for his part in the Battle of Wounded Knee in which he displayed “gallantry in action and other soldierlike qualities.”

So, no, it was not as if the Native Americans just gave up their guns and were moved to reservations.

“[Y]ou have come across the true definition of racism: When one group of people can ruffle their feathers about something that the other group doesn’t. Or, better put, when one group has to follow certain rules another group doesn’t have to follow. Kerri Salazar doesn’t have to ask the white race for permission before using a picture with white people. Apparently, white people have to ask permission from other races.” 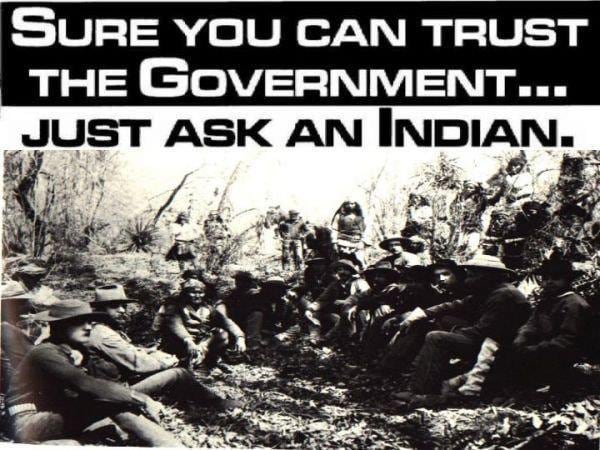 A widely-circulated meme similar to the message displayed on the controversial billboard.

In addition, not all Native Americans find the message disturbing. In fact, some find that the message is spot on. From The Denver Post forum:

“I am a Navajo Indian and I am not offended by the billboard. The billboard merely points out broken promises by the U.S. government. The U.S. broke all treaties with the Native people. All Americans need to wake up — the government will take care all of us, just like they took care Native people. It all started by taking away a people’s ability to defend themselves.”

Does this billboard trivialize a different issue? What are your thoughts?