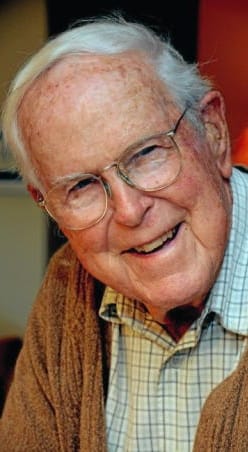 Alan Wood, the former United States Marine who provided the American flag raised on Mount  Suribachi, passed away last week at the age of 90.

Wood, like many WWII Veterans, rarely spoke of his wartime experiences. He went on to work at the Jet Propulsion Laboratory, in California as a technical artist and later as a spokesman. According to Mr. Wood, the circumstances that lead to the Pulitzer Prize-winning photograph occurred when,

“’Don’t worry, you won’t regret it,’” replied the Marine.

And the rest is history. The flag Wood recovered from a salavage depot at Pearl Harbor and brought aboard the Naval vessel LST-779, where he was an officer, was hoisted high atop a battle-scared Mt. Suribachi.

Captured by Associated Press photographer Joe Rosenthal, “Raising the Flag on Iwo Jima” went on to be one of the most iconic images of the Second World War.