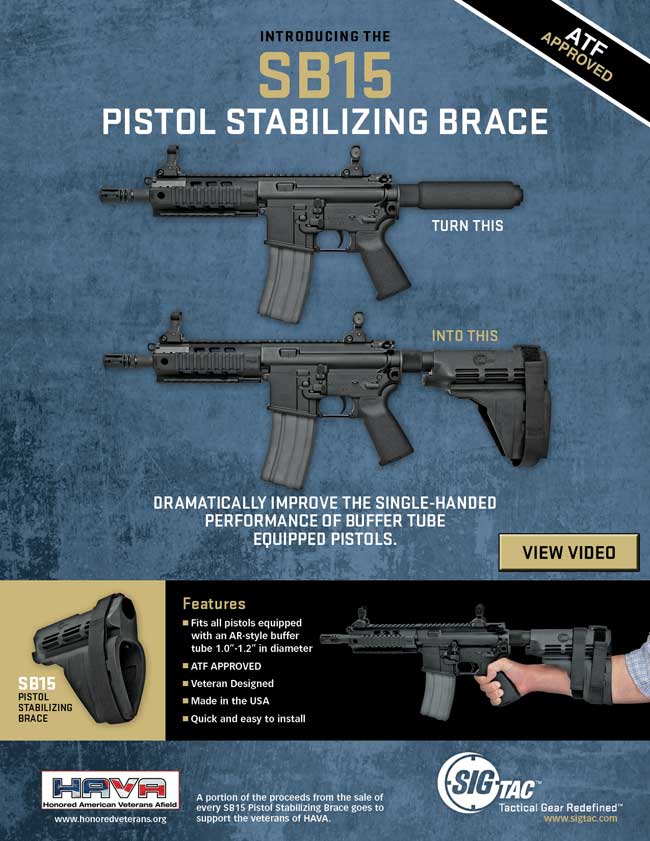 SIG has developed a new type of buffer tube accessory for AR pistols, the SB15 Pistol Stabilizing Brace. While it looks like a stock, it is actually a sleeve for shooters to pass their forearm through, with straps to cinch the whole contraption down.

While it’s a buffer tube-mounted accessory, both SIG and the ATF agree: it is not a buttstock. It looks like a buttstock but isn’t intended to be fired from the shoulder.

This is important because under any other circumstances, a rifle with a barrel less than 16 inches in length is a “short-barreled rifle.” SBRs are extremely regulated and illegal to manufacture without jumping through hoops first.

Because of this, the AR-15 pistol has become fairly popular, if not particularly useful. Compared to SBRs rifle pistols like these and others like Krinkovs and Dracos on the AK side, AR pistol are a bit harder to aim and are usually lumped into the “range toy” pile.

But they’re popular just the same. Case in point, SIG sells several pistol versions of their rifles, and they’re a major manufacturer, not a small shop targeting a niche market.

Adding to that, some cartridges like pistol ammo and 300 AAC Blackout don’t require long barrels and really benefit in the maneuverability department when decked out with short barrels.

These SB15 Pistol Stabilizing Braces add a touch of utility to the rifle pistol while going a long way to preserve the look of the SBR.

And more the point, it allows a shooter to buy a “pistol,” get a tax stamp, file their paperwork and wait six months for their SBR and still have a gun in the interim period.

SIG is going to sell these by the crate. The MSRP is $139. Even if you have to pay full price on these they’re a bargain. For all the details check out the SIG product page. 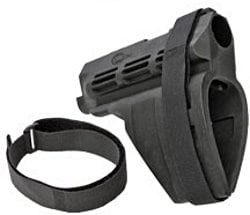 The project started out as a means to help people with disabilities better handle an AR-15. The rifle is already easy enough to control but if you have hand or arm issues then it’s a different story.

That is why a certain portion of the proceeds is going to the Honored American Veterans Afield foundation. HAVA is solely purposed; they work to get soldiers returning with disabilities back into healthy lives, enjoying things like outdoorsmanship and of course, shooting.

Just a reminder: if you decide to get one of these, you have to use it as it’s intended, meaning as a pistol. Treating it like a rifle by adding a front pistol grip makes it a rifle, and you’ve just created an unregistered SBR. So try not to do that.

But if you want an AR pistol that has the look of an SBR, this is where it’s at. You don’t have to be disabled to enjoy the SB15 Pistol Stabilizing Brace. Of course, we also applaud SIG for making this for its intended purposes as well. As large a company as they are, they stand a better chance to serve people who have served the country and everyone else who can’t use an AR due to matters of health.

Like we said, they’re going to sell these by the crate.