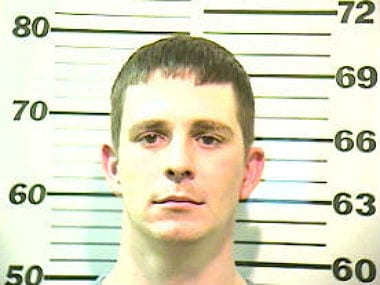 A liquor store owner who was held at gunpoint on Saturday night during a robbery says that while he had that gun pointed at his face, he thought about his family and “got very angry.” He then pulled out his own gun and shot the armed robber.

A local news station reported that the incident happened in Irvington, Ala., a small town about 20 miles southwest of Mobile. It was just before 10:00 p.m. and the store owner, who wishes to remain anonymous, said that he was getting ready to close the store and restocking beer at the time.

The store owner, who works seven days a week to support his family, told the sheriff’s department that the robber, 34-year-old Charles Steele, entered the store about 30 minutes prior to the robbery and asked him what time the store closed.

The robber returned to the store a short while later, armed with a rifle and demanded money from the cash register. He got the money – a total of $75 – but he also chose the wrong place to rob. The store owner stated that he saw his life pass by as Steele had the rifle pointed at him. He couldn’t bear the thought of not seeing his two daughters again, and that’s when the tables turned–the shop owner went for his unknown make and caliber gun and shot Steele. The would be robber ran outside and fled, but the owner followed him out and continued to shoot as Steele took off in a white Dodge Charger.

About 25 minutes after the Sheriff’s Department responded to the call from the store owner, they received another call about a man that had been shot – the suspected robber. When deputies arrived, they found Steele suffering from a gunshot wound to his torso. The store owner shared that it was only the second time that he had ever fired a gun and he was surprised that he had actually hit the man.

Deputies later searched Steele’s home, which was only about 3 miles from the liquor store, and found both the rifle that was used during the robbery and the money that was stolen.

Steele admitted to robbing the liquor store but states that he did so in desperation, as he lost his job a few weeks ago. The store owner says that’s no excuse, as he too lost his job a couple of years ago and got back on his feet the honest way. He explained that’s how he ended up with the store. He used his life savings and even borrowed money to open the store, which has been in business for only about two years. However, he also states that the experience has been so traumatic that he’s considering closing the store now.

Steele was taken to a local hospital, where his injuries do not appear to be life-threatening. Upon his release, he will be taken to the county jail and charged with first degree robbery.

The Sheriff stated that the store owner will not likely face any charges, as he acted in self-defense, protecting both himself and his property.