Another 5 Handguns You Have to Shoot Before You Die

Ever since the first single shot pistol was crafted centuries ago, people have just dug handguns. In the intervening half millennium, thousands of designs have come forth and a few have risen above all others. Last year Guns.com brought you eight to shoot before you die.

Here are five more that just have to pass through your hands before you head to that great gun show in the sky. 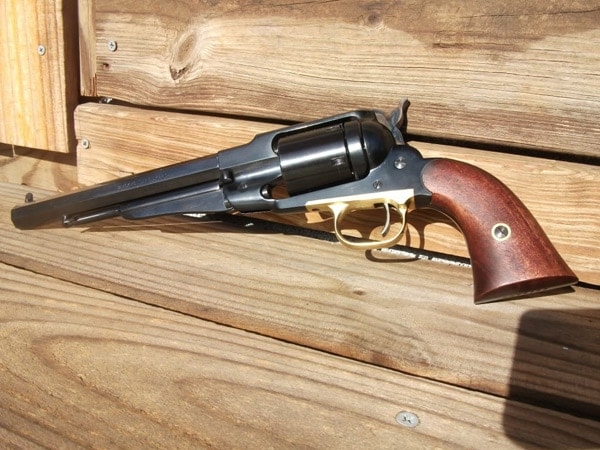 The world that was the antebellum period in United States was one of rapid industrial expansion and in the 1850s firearms makers were stumbling all over themselves to produce the next great gun to roll off the line. One such gunmaker was Fordyce Beals.  After studying the factory process for S&W and Colt revolvers, he came up with a design that was significantly improved in function and production. His design, patented and licensed to Remington in 1858, used a solid frame design that included a top strap that went over the cylinder. This was stronger, more durable, allowed the user to swap cylinders out easily and added a layer of safety to the user if the cap and ball revolver chain fired. 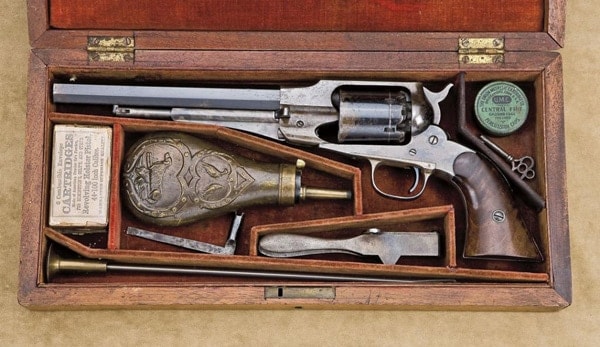 While the Army still went with the Colt design in 1860 as their new revolver, over 132,000 of the tenacious Remingtons were sold during the Civil War to the Union military machine. Buffalo Bill Cody, Frank James, George Maddox and others carried the guns during the Old West era which led to them still being popular today in replicas made by Uberti, Pietta, and Ruger (as the Old Army). With 150 years of excitement over these guns, you owe it to yourself to pick up one of these monsters and experience the crack-pow thrill of a black powder revolver at least once. 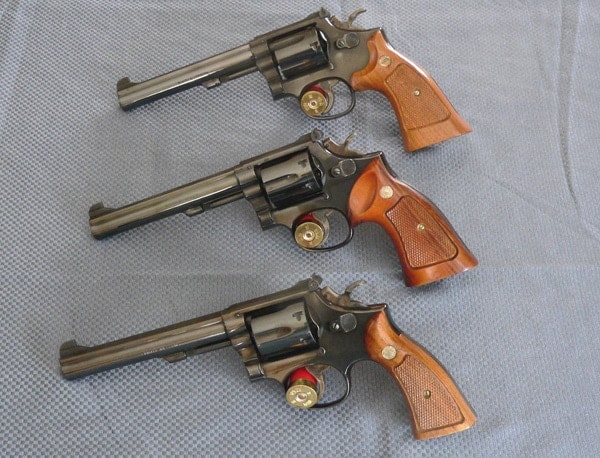 For most of the 20th Century, the standard ‘service revolver’ for both military and police applications was usually a Smith and Wesson K-frame. Introduced in 1899 as the ‘Hand Ejector’, the basics of this sturdy full sized double-action revolver with a swing out six-shot .38-caliber cylinder has remained the same over time. Well over six million of these guns have been produced and it remains a staple of S&W’s (and Taurus, Charter Arms, etc.) line today in more modern finishes.

To be honest, if you shoot at all you’d be hard pressed not to fire one of these fine shooting guns once in your life. 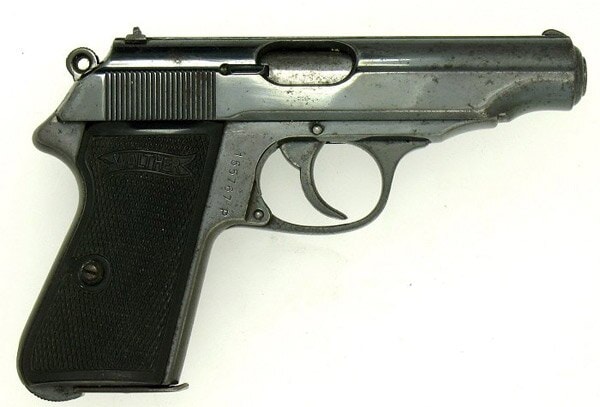 If guns were cars then the Walther PP/PPK series would be an early Porsche. Sleek, finely crafted, exotic, and smooth to the touch, these aristocratic handguns were devised in the late 1920s by Carl Walther for police use. The Roaring 20s was a time where post-modern simplicity collided with the grace of the old world and carved out a unique feel for everything that decade touched. The PP was a straight blowback concealable weapon that was at home in a police officer’s holster, gentleman’s overcoat pocket, or agent’s cummerbund. Packed with enough .32 ACP rounds to get the job done if needed, it has been expanded and improved over the years to take .380, and 9mm Super rounds for those who wanted more punch.

For those who want to feel what the 20s had to offer, pack around a Walther for a day. You may just want to keep it. 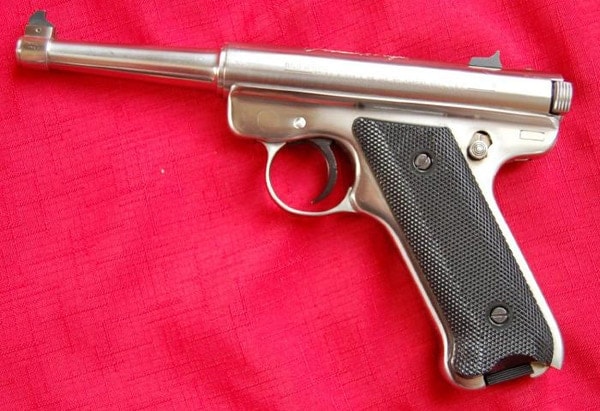 Back in 1949 a firearms engineer by the name of Bill Ruger, with a little startup money and connections from a former OSS operative and child’s book author Alex Sturm, started making a handy little 22 pistol in his garage.

This simple blowback gun was made from a stamped sheet metal frame, used piano wire coiled springs instead of flat springs and blended with the timeless lines of such pistols as the 1900-era Luger and the Colt Woodsman of 1915. The product, with a bolt system borrowed from Kijiro Nambu, was an accurate and ruggedly sturdy plinker that was affordable without being crude.

The Ruger Standard were a hit, selling well across all markets and helping to launch the infant company of Sturm, Ruger into the stratosphere.

The Ruger Standard is still in production as is the MkIII and shows no signs of stopping. 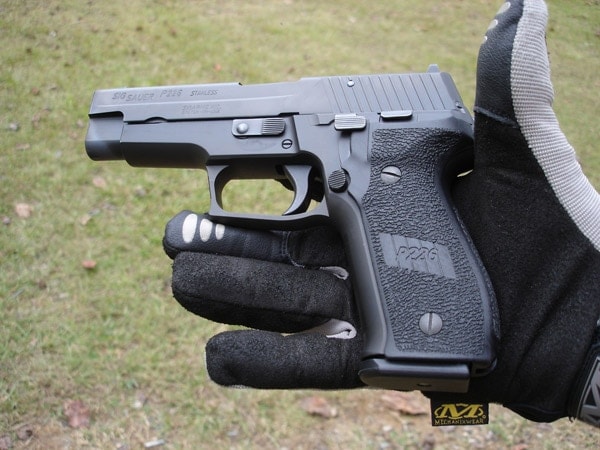 In the early 1970s, the Swiss company of SIG Arms AG was working on a design for the new Swiss Army pistol. Using the locked breech short-recoil method that John Browning pioneered while coupling the hammer drop safety of the German Sauer 38H with the firing pin block safety of the 80 Series 1911, SIG came up with a gun that was both safe and reliable. Use of a forged alloy frame and a stamped steel receiver with a machined breechblock insert kept both weight and production costs down. The result was adopted in 1975 as the Swiss P75 pistol and sold abroad as the P-220. SIG won contracts with the West German police for a scaled down version that became the P-225. US users wanted bigger calibers, more ammunition capacity, and a push button magazine release and SIG answered with the P-226, 228, and 229 series pistols over the past few decades to scratch the itch.

Today the SIG P-series pistols are trusted by law enforcement and military around the world. Firing one of these well-engineered and easy handling guns is a treat no matter whether it’s a P-220 single stack .45ACP or a P-229 SAS double stack in 9 milly. 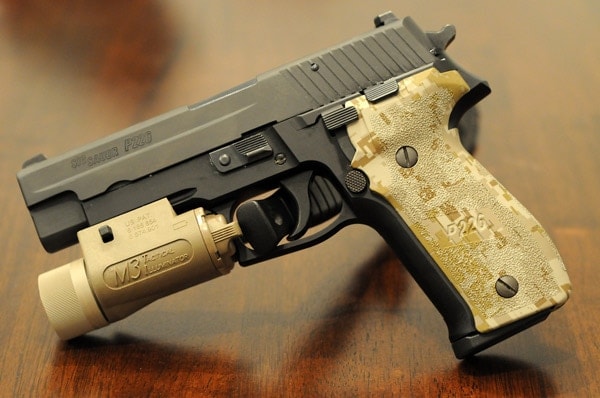 Of course, your experiences may vary in this life, but you can’t pretend to think of yourself as a pistolero of any sort unless you have handled these five classic guns.  You just can’t.