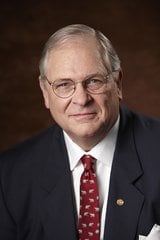 On May 6 the current National Rifle Association president, David Keene, will step down after completing his two-year term, and the new president, Jim Porter, will step up to the role.

The exchange coincides with the 142nd Annual NRA Meetings and Exhibits held in Houston this week. According to the website, the convention hosts over 550 exhibitors and 400,000 square feet of exhibition space, which includes educational seminars, celebrities and other events, and attracts vendors and gun enthusiasts alike from across the country each year.

The new president is certainly not new to the NRA. James W. Porter II, known to friends and family as “Jim,” has been a long-time board member of the NRA, recently serving two years as second vice president and two years as first vice president before becoming eligible for the position as president, which is a voluntary and unpaid position.

Porter is described as a nice guy, someone who always has a friendly word for everyone, professional and pleasant. He’s a stereotypical Southerner, with a heavy accent and Southern hospitality, a friendly guy that knows everybody.

Porter will be the first ever second generation NRA president, as his father, Irvine C. Porter, served as president from 1959 to 1960 and was an Honorary Life Member of the NRA. Porter states that both his mother and father “instilled in me a great respect for our firearm heritage and constitutional freedoms. I am honored to be able to continue their work to ensure that the inalienable right to keep and bear firearms for the defense of one’s country, family and self is protected for future generations.”

An attorney from Birmingham and a Special Assistant Attorney General for the state of Alabama, Porter brings legal expertise, service and counsel to the NRA. Keene calls Porter “a superb attorney” and “at this stage in the NRA’s history … the perfect match for president.”  Keene also gave a glimpse of the organization’s future goals to The Washington Times, who was the first to report the news of the new president on Tuesday. “We are likely to win most of the legislative battles in Congress, we will have to move to courts to undo the restrictions placed on gun owners’ rights in New York, Connecticut, Maryland and Colorado.” He explains, “Our focus now will shift to the courts to make sure these states’ laws are scaled back to be consistent with the McDonald and Heller decision. Jim is perfect to lead that effort because of his ability and experience running a legal team.”

NRA board member, Carolyn Meadows, also comments on Porter’s experience as a lawyer, stating, “He has the humility of a country lawyer but the smarts of a New York lawyer.”

Keene also stated that he plans to remain an active member of the board, offering advice and support where it’s needed through the coming years.

Porter has already been serving as the chairman of the NRA’s Legal Affairs Committee, but with recently renewed gun control efforts back at the top of political affairs, his legal expertise will likely move into the spotlight, although it’s not likely that we’ll see much of Porter himself in the spotlight. While Keene had an active role in media appearances, Porter doesn’t care so much for publicity and prefers to work behind the scenes. Of course, Wayne LaPierre, the Executive Vice President, has really come to be known as the face of the NRA. So in that respect, it’s not likely that much will change. If anything, LaPierre will possibly be seen publicly even more.

While Emily Miller of The Washington Times concludes her report with stating that “The media and the gun grabbers will have a hard time attacking Mr. Porter.” It seems as though the attacks have, not surprisingly, already begun. He’s been called a conspiracy theorist, resembling Pappy O’Daniel, and “very special” in a sarcastic kind of way, reaffirming the old adage that if you don’t have something nice to say, maybe you shouldn’t say anything at all.