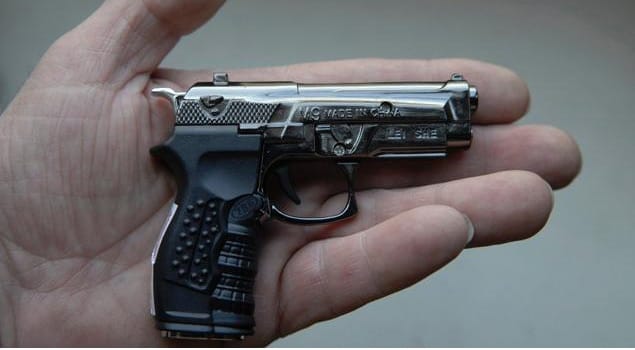 Investigators fined the store after discovering that it was selling bronze-and-silver colored 3-inch butane lighters shaped like guns. The lighters, which were retailing for $10, were promptly removed from the store’s shelves.

Apparently toy guns in New York City are required to have a legible stamp identifying the manufacturer or trade name. They are also supposed to be bright green, blue, red or a neon color.

According to Fred Shayes, the owner of US Camera & Computer , “The day the inspector came, he said, ‘This is illegal.’ I took it off the shelf right away. I sent it back, and I showed them the invoice that proved I returned it.”

But a spokeswoman for the city’s law department said: “Imitation guns that are not easily distinguishable from from weapons pose a real and significant danger to public safety.”

In a bid to block the $60,000 fine that was handed down by Bloomberg’s administration, Shayes has filed papers to block the injunction.

“We don’t have the money,” said Shayes. “I would have to take a loan out from the bank to pay that.”