One of the first things shooters learn when they step over the line from target shooting to defensive shooting is the low ready position: that is where two hands are on the handgun and the weapon is pointed approximately 45-degrees to the ground. The low ready is a safe position and, to be sure, one that should be taught and implemented to all shooters. However, when considering that most lethal confrontations involving guns are a) with handguns and b) less than seven yards—and that 21 feet is on the far side—using a low ready does not necessarily put the shooter in the best position to engage the incoming threat. In other words, low ready isn’t really all that ready.

A police officer-turned overseas security contractor that I know had his first firefight on the streets of New Orleans many years ago. He told me that he drew his weapon and shot, while the suspect was shooting at him. Both the officer and the suspect missed each other and the police officer, inexperienced at the time, got very lucky; he was afforded the opportunity to learn from his mistake and he was eager to tell others in order to help them win lethal confrontations. So what happened?

The officer told me that he quickly drew his sidearm and shot several rounds. He said the angle of his draw stroke was such that the muzzle of this weapon was facing downward through the draw. Shooting after he cleared the holster was fine as long as your finger goes to the trigger when you’re on target and ready to shoot, but in this instance, the officer shot before his muzzle was level with the guy he was hoping to hit. Monday morning quarterbacking, his draw stroke was in the bowling position, a common mistake that happens when a shooter draws outward in an arch rather than up and out. The round hit the ground in front of the suspect, who was only about five yards in front of the police officer.

On the flips side, another common mistake shooters make on the draw stroke is to point their muzzle up and shoot high with the round sailing over the targets head. This type of draw is often referred to as ‘going fishing’, since it resembles someone holding a fishing pole. Another colorful term for it is “trying to use a handgun caliber as Air Defense Artillery”.

No matter whether you were taught the draw in three steps or four steps, the idea is to grip it and rip it out of the holster and get shots on target quickly. Personally, I stopped teaching the draw in steps a few years back because I noticed students have a tendency to stop at every step. Why would you ever want to stop ever if someone’s shooting at you?

Whatever you do, you need to get the gun out and get shots on target fast but, most importantly, the gun needs to be level with the threat or target. Take a moment to let that sink in: gun out and shots fired, important, gun level with threat or target, more important.  Otherwise you’ll end up like the police officer mentioned above…or worse, dead.  So how do I ensure this happens? 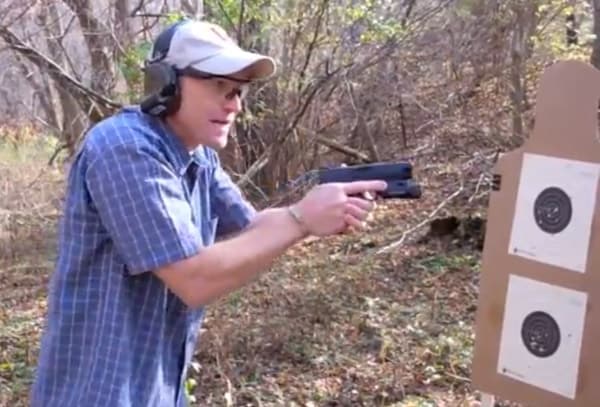 Compression ready also allows shooters to ‘punch out’ by fully extending your arms towards the target while keeping the barrel fairly level.

This is what I teach:  after the gun has been drawn, bring the gun back to a compression or contact ready position.  A compressed ready position is where the shooter has the firearm pulled a bit closer to the chest and with their elbows at either side of their rib cage.  Keep the muzzle of the firearm pointed directly at the target and parallel to the ground.  It is a lot easier to do this in the compression or contact ready positions and it will ensure that your gun is level upon firing. It is also the preferred method for weapon retention and control (especially when looking around or scanning for threats). The compression ready position is also the best option for moving.

Remember to decock before you move or whenever you come to a compression ready (or low ready) position, if necessary, and always keep your finger straight and off the trigger until you’re ready to shoot. That means the index finger is out of the trigger guard and touching the frame of the weapon. You don’t want to have a ND.

In short, be sure to check out the video for some additional tactical tips. Remember to train hard, stay safe and have fun.