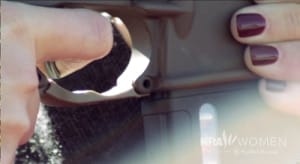 Last week The National Rifle Association, along with Smith & Wesson, launched a new women’s Internet channel in an effort to highlight and cater to the growing movement of women in the gun community.

The NRA announced on their Facebook page, “We are proud and excited to announce the new and improved NRA Women presented by Smith & Wesson Corp. Our mission is to expose the public to the female face of the NRA. Look for profiles featuring women in the shooting sports who are making their voices known coming soon!”

The channel features a variety of topic areas: ‘Armed and Fabulous’ is a collection of profiles of women and one teenage girl, who have already made a presence for themselves in the gun community while ‘New Energy’ looks at the fresh faces among the ranks of NRA women. The ‘Range Ready’ section offers a variety of tips and tactics in the categories of shooting, safety, hunting and competition. ‘Lifestyle’ sections centerpiece is ‘The Girl’s Guide to Guns with Natalie Foster’ along with recipes for wild game, and ‘Girls and Guns Night Out’ showcasing local leagues. The Women’s Leadership Forum introduces women of influence that defend Second Amendment freedoms and help secure the future of the NRA through philanthropic leadership. ‘Refuse to Be a Victim’ is dedicated to all the brave women who have defended themselves with a firearm and those who refuse to be a victim, featuring an armed woman of the week and resources for self-defense training.

On Guns.com’s first look, the channel does have much to offer, but still has a ways to go in terms of catering specifically to the needs of women.  Granted, the website still is in the making and what is featured so far is quite impressive, but the Women’s Channel isn’t actually a new thing, as they had the same channel up and running last year for some time.

However, it is a breath of fresh air to see a lot of folks equating gun rights with women’s rights nowadays and it’s great to know that women are not alone in both the gun community and in the struggle for Second Amendment rights. By exploring the diversity of women gun owners, it helps to break certain stigmas associated with gun ownership. There is a whole market out there to be taken when it comes to catering to the uniqueness of female gun owners, as the needs and challenges presented compared with male gun owners are vastly different.  A company or organization which genuinely explores those needs could be quite innovative, but even “women” is a much generalized category, as the needs of a single woman are going to be much different than the needs of a mother of three small children, as they will be yet more different than those of an elderly woman.

Some challenges to explore are well known like women’s clothing – think where do you carry concealed when wearing a sundress to the beach? But also we need to explore the needs of mothers – where do you carry concealed while carrying a baby in a wrap? Question the needs of senior citizens – how does a woman with a walker hold onto that walker while gripping a handgun and convincing her assailant that she means business? And of course, there’s the physical challenges women may face – how do you easily rack the slide on that .40 that your husband does so effortlessly?  Also, while the gun rights community is always eager for new recruits, male or female, and the sport is certainly one that is fun, it is of imperative importance that the art of shooting be taken seriously.  Being a gun owner is more than just a hobby, it is a responsibility.

The NRA has always held a special interest for females in the gun community, but their primary focus for the current movement seems to be on “New Energy”. While their efforts can certainly be both respected and appreciated, the message they seem to be sending in this woman’s opinion is a rather mixed one at best, especially when comparing the “New Energy” video with the trailer from last year’s launch of the same channel. The difference in the two videos is borderline disturbing. 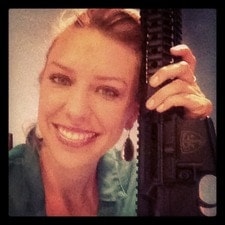 The current video is filled with young, thin, attractive women, and while the video claims to show the diversity among female gun owners, it’s fairly undeniable that the video itself lacks diversity. The older video features a much more varied lineup of female gun owners and it’s hard not to question what kind of message is being sent when your promo shows only models.

And while fads will come and go with any hobby, the fad of “encouraging” girls to get into firearms with enticing toy-like guns and accessories coated in shades of pink and Hello Kitty has been going on for as long as we can remember and never been that big of a hit with serious gun owners. Choosing to own a handgun isn’t like choosing a new handbag and giving new shooters the false impression that it is, is troubling.  Think about it this way: if the current fad is pink camouflage nail polish, and you make a mistake while applying your nails, nobody is going to care.  It’s not going to make the evening news and nobody is likely to get hurt. However, if the current fad is to be a girl with a gun and you make a mistake handling it, that mistake can possibly have fatal consequences. Gun ownership is not something to be taken lightly, and it’s certainly not something to do to satisfy a need for attention.  A firearm isn’t a fashion accessory.

Some still argue that the growing women’s movement isn’t really that big of a deal. Sure, it remains primarily a men’s interest area, and most likely will continue to be such, but there does seem to be more women who are stepping up to the plate of gun owner in recent months. Even here at Guns.com, our own demographics question the rise of the women’s movement in the gun community, as our Facebook page has an overwhelming 85 percent male base. Is it worth it for companies and organizations to focus their efforts on the 15 percent? I couldn’t say, as I’m a writer, not a marketing consultant. However, I can say that there are many ways that companies can grab the interests of women and appeal to the unique challenges they face as gun owners. And no, I don’t mean by handing me a pretty pink pistol.