At the NRA convention in Houston this past weekend, a 3-year-old girl from Austin, Texas was honored for being the youngest life member of the National Rifle Association.

Elaih Wagan shared the stage Sunday with her father, her grandfather and NRA Executive Vice President Wayne LaPierre to accept the honorary award. Elaih’s grandfather gave her the membership as a birthday present.

However, the 3-year-old cutie wasn’t the only one honored that day. Wayne Burd, of Arkansas, was also honored for being the oldest life member of the NRA. Burd was born in 1917 and this was the second year that he has received the honorary award.

Elaih isn’t the only tiny tot life member of the NRA either. Former GOP presidential candidate, Rick Santorum announced last year that his then 3-year-old daughter, Bella, who will turn five in a few days, has a life membership as well.

Following the awards ceremony, the NRA sponsored “Youth Day,” a special day aimed at youngsters interested in learning about firearms, safety and Second Amendment rights. The day included a free six-month membership for kids in attendance.

While the weekend-long event offered, according to the NRA’s website, “spectacular displays and fun-filled events for the entire family,” there were those who were outraged by such an event for families to enjoy together. During the Youth Day, protesters read names of victims of violence whose attackers used guns and accused the NRA and its members of “brainwashing these kids to love guns.” 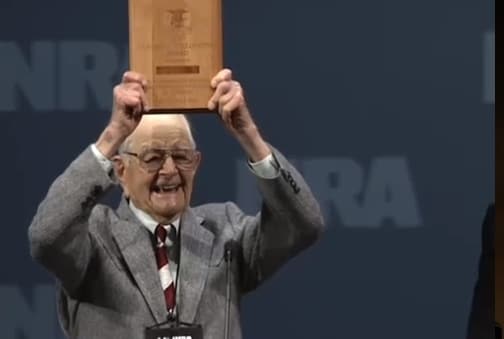 According to the New York Daily News, which referred to the event as “sick,” one protester, 24-year-old Cal Castille of Houston, stated, “They shouldn’t be teaching kids how to use guns. What happens when they get older? They might become like that Connecticut killer.”

Scott Mace, a father who attended the convention with his 9- and 11-year-old daughters, begs to differ, stating, “If a child understands how to properly and safely shoot, then they become much safer. In a bad situation, they will understand what needs to be done.”

As the great gun control debate will most likely dominate discussions among events such as these, there is one undeniable fact – that 3-year-old little girl, complete with ear to ear grin, no doubt looked thrilled to be up on that stage with her dad.