Arizona Gov. signs Bill to establish State Militia to be used at her Discretion

Arizona Gov. Jan Brewer recently signed a bill, SB1495, allowing her, as governor of the state, to establish a state guard separate from the National Guard, to be used at any time which she (or any standing AZ governor) deems necessary.

If the national guard of Arizona or a major portion thereof is called into active federal service, or if the national guard or a major portion thereof is alerted for federal service OR FOR ANY OTHER REASON THE GOVERNOR CONSIDERS TO BE NECESSARY, the governor may establish an armed force for the safety and protection of the lives and property of the citizens of the state which shall be known as the Arizona state guard.

The Arizona state guard could be established and utilized for a whole plethora of situations, but most likely would include helping to secure the United States-Mexico border, or situations such as nuclear, biological or chemical attacks or accidents. In such instances, the state guard would be of great benefit to first responders, who lack a population of trained support staff. 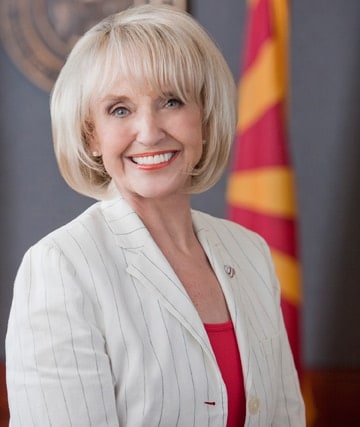 With a heavy National Guard presence at the United States-Mexico border in Arizona and National Guard funding for the border due to expire in June, Rep. Jack Harper, who sponsored a similar bill, said the measure couldn’t have come at a better time.

According to a local newspaper, Harper, who has also previously spoken with the Arizona National Guard’s adjutant general about how to use a volunteer militia to secure the borders, states that he is “very excited that she [Gov. Jan Brewer] signed it.” He also expressed that he would like to see her sign an executive order to immediately establish the guard to help with securing the border.

While the National Guard is not allowed to engage in direct hands-on law enforcement, they are an asset to the Border Patrol, helping to secure the border through surveillance, among other operations. But it’s not just about keeping illegal migrants out of the country either as drug smuggling operations are also a major concern with border security.

In the past, there were some complaints about the heavy military presence in the area, though some local residents have expressed support for volunteer groups stating they they are helpful in deterring drugs and other illegal activities.  Indeed, the influence of military tactics into homeland security measures have been something popping up more and more lately.