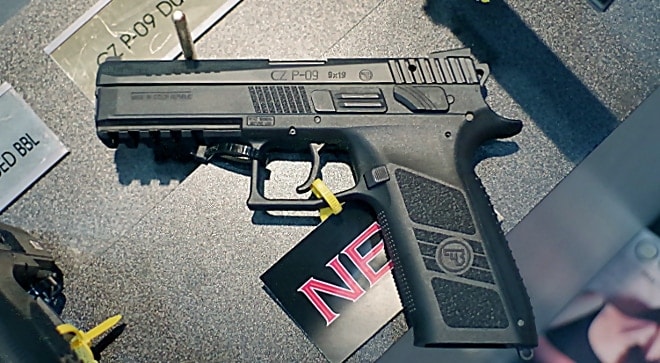 After years and years of waiting for CZ’s latest, modern, lightweight, full-size and high-capacity 9mm handgun, the CZ P-09 Duty, we’re pleased to say that … the wait isn’t over. But CZ hasn’t given up on the design, they’re simply trying to keep up with existing product orders, holding off on introducing a gun they can’t deliver in quantity. The P-09 on display was one of five that have been imported to-date.

The details and specifications have been set in stone, and if there’s one thing that makes it all worth waiting for is the price: CZ has set the suggested retail price at $514, just $18 more than it’s predecessor the P-07.

The capacity is up from 16+1 to 19+1, with a slightly longer slide and 4.25-inch barrel. It’s going to be a solid, affordable service pistol, and CZ is on track to get them to market later this year. The product page is up, albeit a little scarce on details. 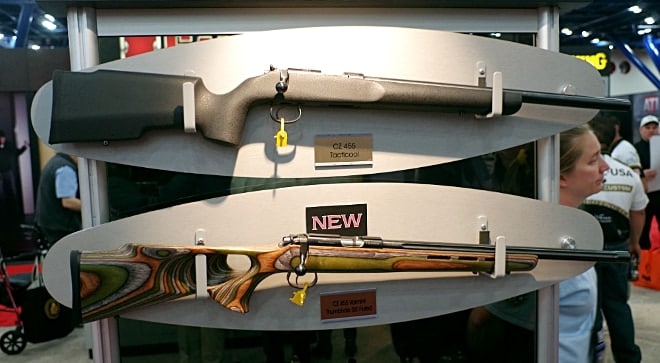 CZ is also offering two new variants to their 455 series of rimfire rifles. They are the 455 Tacticool and 455 Varmint Thumbhole SST. The polymer-stocked Tacticool is named for its Boyd’s Monte Carlo stock, with a raised cheekpiece, aggressive pistol grip and curved buttpad.

The stock also has an enlarged handguard for stability when shooting from bags, but it also has two sling mounts, with the extra for a bipod. Designed for training with lower-cost ammo — provided you can find .22 Long Rifle, of course — the Tacticool has a heavy 20-inch bull barrel and a receiver that’s cut for 11mm dovetail scope mounts.

The Varmint Thumbhole SST is built on a great-looking three-color composite thumbhole stock and also features a 20-inch bull barrel, although it’s fluted for improved heat dissipation. Likewise, the stock is vented for air flow. 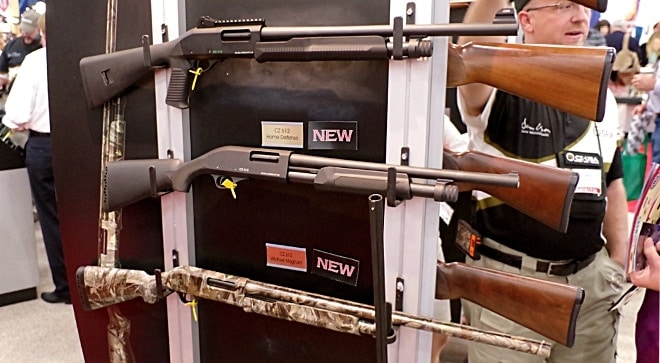 But it’s CZs new pump shotguns that are likely to be the biggest hits. They make up the CZ 612 series, and are all three chambered for 12-gauge shells.

The basic 612 Home Defense is the basic model with an 18.5-inch chrome-lined cylinder bore barrel. A separate 26-inch ribbed barrel is available for hunting. The 612 HD has a dovetailed, ramped front sight that lines up nicely with the rear sight milled down the length of the receiver. It weighs six pounds even and has a 5+1 capacity, accepting 3-inch shells.

The 612 HC-P is their official “zombie-themed” shotgun, although you wouldn’t know it by seeing it. The “Horde-Control Pump’s” only zombie decorations is the gun’s green-painted engraved model designation on the side of the receiver. The rest is all features. It has a pistol-grip buttstock, lengthened forend and ghost ring fiber optic sights that pick up very easily. The receiver is railed to accept optics on top of that.

The HC-P has a 20-inch barrel that is threaded for chokes, and it comes with one cylinder bore choke included. It also has a 5-round magazine and chambers shells up to three inches long.

The 612 Wildfoul Magnum comes standard with a 26-inch barrel and accepts 3.5-inch shells. It’s finished with a camouflage pattern and also has an extended forend.

But there’s no mystery about why these pumps are going to be popular. They’re incredibly affordable, with the 612 WM priced at $409, the HC-p just $349 and the HD an incredible $290. Given that real-world prices are going to be a bit lower, these are going to fly off shelves.

So it’s not all great news on the CZ front; we were really hoping to lay hands on a P-09 of our own. But as far as the other guns are concerned, we like what we see.