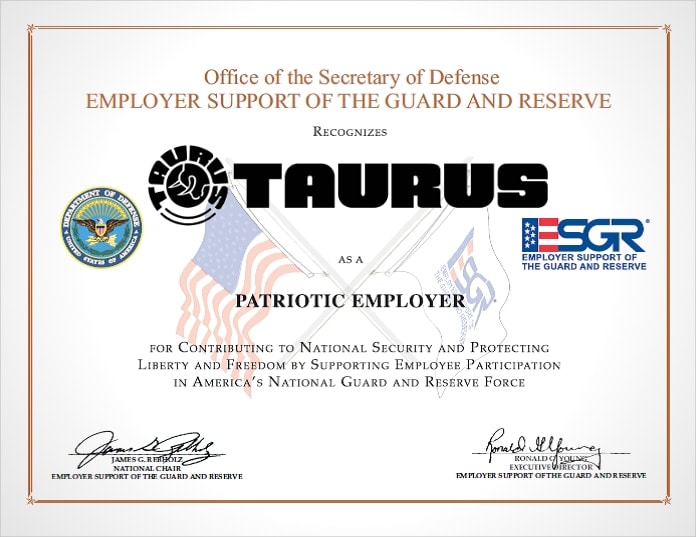 Whether or not you’re a fan of Taurus’ products it’s hard to disagree with their policies. Taurus is especially committed to the greater world of guns and gun owners at large and the Patriotic Employer Award, granted by the Department of Defense, reflects that.

The Patriotic Employer Award is given to select companies that support the National Guard and reserves, not just in hiring them but working around their tough schedules, ensuring that these soldiers will have jobs back at home after they’ve returned from duty.

Taurus has hired employees in their Miami-based factory that were either active duty or are still actively serving in the reserves, in both permanent and temporary positions with in the company.

Mark Kresser, President and CEO of Taurus said, “We are truly humbled to receive such a prestigious award from the United States Department of Defense. We have worked hard to hire Veterans first whenever we can. We strongly believe in supporting our Armed Forces and the folks who have dedicated their lives to protect our freedom both stateside and abroad.”

Balancing a life at home and a career abroad is one of the harder things about a life of service with the armed forces and every company who helps soldiers with that deserves an award. If Taurus gets singled out it can at least serve to get other companies to try even harder.

It’s not just the troops that Taurus supports, of course. If you buy any new firearm you can sign up for a free 1-year membership with the NRA courtesy Taurus (.pdf), and they support the industry at large with their ties to the NSSF. And their Carry On Movement is dedicated to all aspects of concealed-carry.

Taurus launched a marketing campaign to re-brand the company image, openly talking about their efforts to improve their quality control and bolster their reputation as a solid manufacturer. They’ve been expanding rapidly acquiring companies like Heritage Manufacturing and Diamondback Firearms. Currently Taurus is the ninth largest firearm manufacturer in the U.S.

For several months now Taurus has been making small references to “something big.” They have crafty engineers, that’s not even in question. We won’t be able to say what they’ve got up their sleeve for a couple more months at least, but they’re up to something. 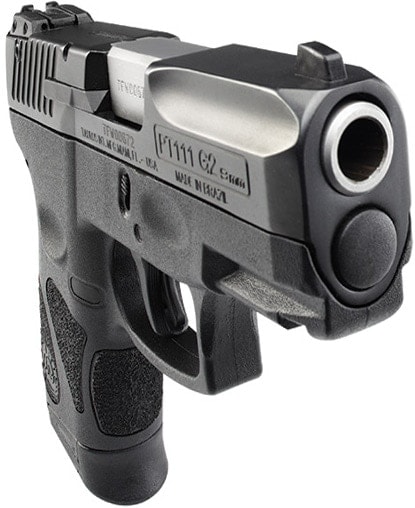 In the meantime we have to say that we’re seeing good things with Taurus’ firearms. At the NRA Annual Meeting last week we again played with their most recent concealed-carry pistol, the Millennium G2 and were impressed.

The Millennium G2 has a very aggressive, but not irritating grip texture. It’s standard fare for a polymer double-stack concealed carry pistol in terms of size and weight, a little on the light side, even. It’s easy to rack and points comfortably, but what makes it stand out is the DA/SA striker.

The trigger feels familiar to anyone who’s ever shot a Glock, but if you run across a hard primer all you have to do is pull the trigger again. Some people don’t advocate “second strike” but it’s an option you don’t have to use if you don’t want to.

But what really sets it apart is the sticker. The Millennium G2 has an MSRP of $350; it’s extremely competitive against other concealed-carry pistols.