Will gun makers flock to Texas? Gov. Rick Perry explains why they should (VIDEO) 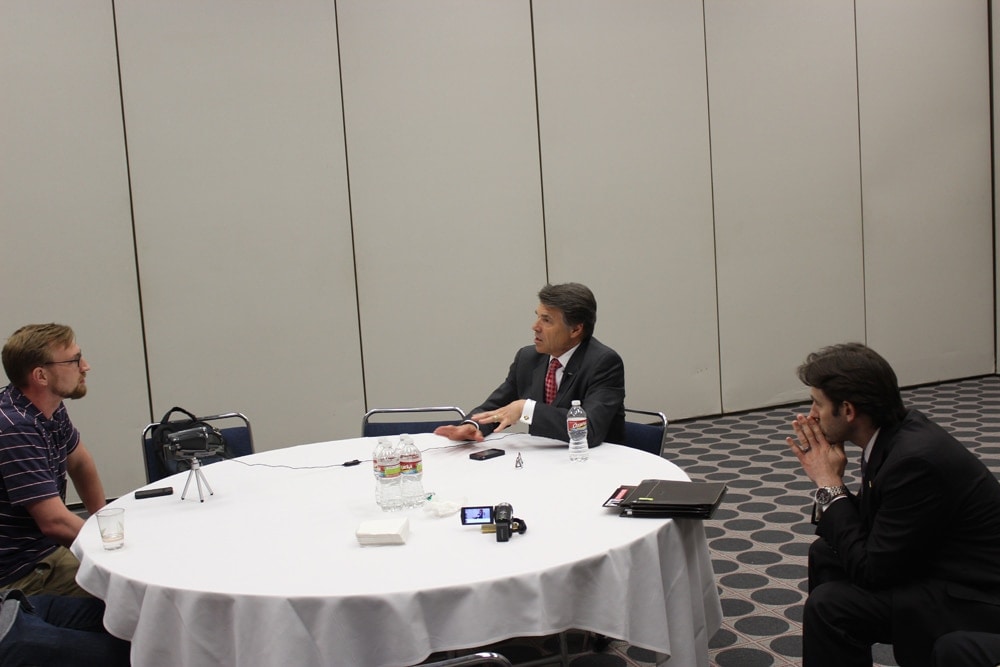 With only a cluttered table between them, Guns.com sits down with Texas Gov. Rick Perry at the NRA annual meeting 2013. (Photo by David Higginbotham)

What has been traditionally a northeastern industry in the U.S. may soon become a southern one, if Texas Gov. Rick Perry has a say in the matter. While his office has contacted more than 30 gun companies this year with pitches to move to the Lone Star state, on Friday he attended the National Rifle Association’s annual convention in Houston to personally invite more. Perry offered them safe passage into Texas, enticing them with gun-friendly communities and the prospects of expanding their businesses with limited government interruption.

In the speech he gave during the convention Perry told a crowded auditorium that lawmakers who propose new gun laws, like the ones recently passed in Connecticut, Maryland and Colorado, “sell the false premise that they’re actually solving a problem,” but in reality they make it harder for law abiding citizens to buy and own firearms. He added that gun owners, gun rights supporters and gun manufacturers are being “demonized,” so he suggested that they leave where they’re not wanted and move to Texas.

“States that send the message, ‘Listen, we don’t want you in our state, we’re going to tax you out, regulate you out, litigate you out of our state,’ then if you’re a good business man or woman you’re going to say, ‘You know what? We don’t need to be here, so lets look at where we’re wanted and what’s the best bottom line for our company,'” Perry said in an interview with Guns.com.

What Texas has to offer

Besides having a traditionally strong gun culture that would welcome gun makers to their state, Perry suggested that Texas also offers companies the best economic deal due to its low tax rates, lack of a state income tax, less regulation, fair legal system and skilled workforce.

Of those packages, Perry specifically referred to the Texas Enterprise Fund. If a company is looking to move and states are competing for their business, the TEF can be used as a final incentive — a “deal closer” if you will. The way it works is the state of Texas will award X-number of dollars to a company if they move to Texas and create X-number of jobs.

According to a state legislative report on the TEF, from the beginning of fiscal year 2004 and on through Dec. 31, 2012, Texas has awarded more than $487 million in grants divvied up between 106 projects. As a result, those projects created 66,084 jobs and $17.38 billion of capital investment committed.

However, not all businesses new to Texas are awarded the grant. In order to be eligible a business has to apply and meet the necessary requirements. How much a company is awarded depends on the size of the company and its projected growth, explained Josh Havens, the Governor’s deputy press secretary.

The Governor’s office wants businesses to “come to Texas, establish roots and grow, free of government interference,” Havens said. But since “[TEFs] are capital investments we’re going to hold [the business] to that number of jobs,” he added.

While thousands of additional jobs sounds great for Texas, will the proposed incentives be enough to entice gun manufacturers to move to Texas?

The Governor said he met with upper management from Colt, Beretta, Remington, Stag Arms, Magpul and PTR Industries to discuss a possible move to Texas. With the exception of Remington, it appears the other five companies will wait and see what happens in the upcoming weeks before either announcing that they’ll relocate or officially identify a new home. Guns.com contacted all the aforementioned companies, but was only able to discuss the situation with a handful of them.

Beretta detailed plans of producing firearms outside of Maryland with Guns.com in a previous article, but in a follow up Jeff Reh, chief counsel for Beretta, said via email that they could not discuss specific discussions they’re having with state officials. However, he added that “Texas is one we will consider due to that state’s long-standing and consistent support for Second Amendment rights.” 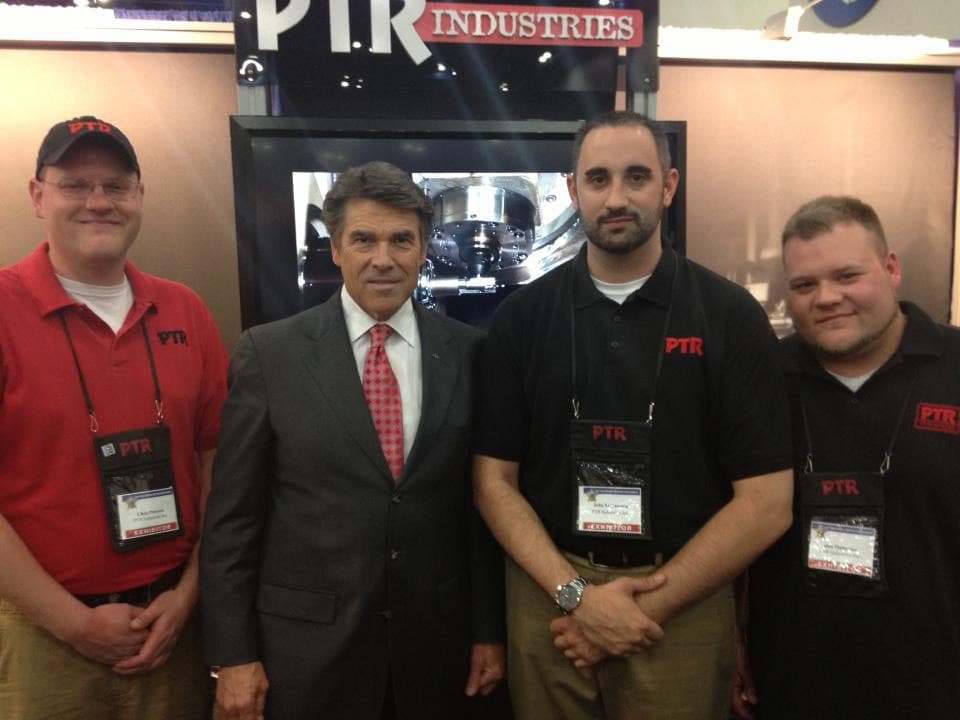 Connecticut companies Colt (or as the Texas Governor refers to it, “Big Colt,” not to be confused with Colt Competition, which recently relocated to Texas from Oregon), Stag Arms and PTR Industries told Guns.com that they will also wait before announcing anything concrete, but they do intend on moving.

While larger companies could say little to nil on their meeting with the Governor, PTR Industries Vice President of Sales John McNamara said Perry was personable and simply shed light on what Texas has to offer.

Unlike major gun manufacturers like Colt or Beretta, PTR Industries could say they are in fact moving. McNamara said they did what they could with the resources they had to prevent the passage of new gun laws such as give testimony in front of state lawmakers, but “as far as lobbying, Colt and Stag and companies like that are much larger than us. They have a lot more strength in those areas than we do, so we felt like the best way to have our message sent was to leave the state.”

However that “message” comes with a cost. While it’s easy for a company to say they’ll stand up for their political beliefs, it’s much harder in practice. For all the companies aiming to move they have to figure in relocating current employees and their families, or working out deals with the ones who choose not to relocate, move machinery, inventory and raw material — essentially uproot their current existence, the companies confirmed. And the more employees, products, materials, etc. the company has, the more complicated the decision becomes.

But McNamara said the employees at PTR Industries had a general discussion and the majority agreed that  moving was the best option. “Everybody believes in what they do, so I think they understand that this is going to be a necessary measure to protect our company and protect our future in the industry.”

PTR Industries is relatively small compared to the others in their area. They have 42 employees, a catalog containing only a few rifles and a much smaller facility, so they could more easily pick up and move with fewer repercussions, said Vice President of Sales John McNamara. But “it’s unlikely that everyone will be able to make the move.”

McNamara said PTR Industries will figure out where they’ll move within the next three weeks and will be completely out of Connecticut by Jan. 1, 2014.

Although the future for the gun industry, more specifically gun manufacturing, is still uncertain, it looks like what has been traditionally a northeastern trade may move, but “Where?” is the question. Well, sounds like Texas has a pretty good shot.