Boy Pretends Pencil is a Gun, gets Suspended (VIDEO)

A 7-year-old boy was suspended recently for making a threatening gesture – pointing a pencil at another student while making “gun noises.”

Christopher Marshall, a second grader from Driver Elementary in Suffolk, VA, was pretending to be a Marine when he was spotted leveling the lead-filled writing device at a fellow 7-year-old last week. 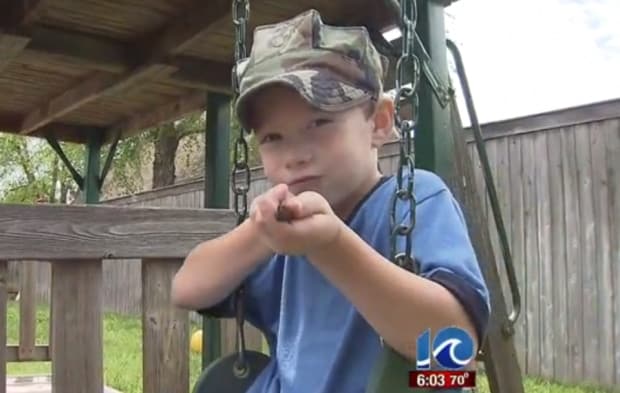 According to the boy, he was simply “being a Marine and the other guy was being a bad guy.” Paul Marshall, Christopher’s dad, is a former Marine and was clearly frustrated with the two day suspension.

“It’s gone too far. Enough is enough,” said Mr. Marshall. “Where do we draw the line? I mean what’s the big deal? He’s just being a kid.”

But Bethanne Bradshaw, Suffolk Public Schools spokesperson, disagrees: “A pencil is a weapon when it is pointed at someone in a threatening way and gun noises are made.” Sighting a spike in school shootings in recent years, Bradshaw explained the district employs a “zero tolerance policy,” in regards to weapons.

Ultimately, the boy’s parents say school administrators failed to use common sense. Their son maintains good grades and has no history of disruptive behavior. And while swearing off aggressive pencil brandishing at school, Christopher continues to play freely at home.