Whether you like him or not, President Barack Obama is a great community organizer.  Arguably, his grassroots tactics, his ability to mobilize the masses behind a cause is the main reason he is a two-term president.

Since the mass shooting at Sandy Hook Elementary School in Newtown, CT, Obama has been using these skills via his political advocacy group – Organizing for Action (OFA) – to push for tougher gun laws.  Not surprisingly, OFA has gained some traction.

Thus far, OFA has collected more than 1.4 million signatures on a petition urging congressional leaders to reintroduce a bill that would expand background checks to firearm purchases made at gun shows or over the Internet, CNN reported.

“The vast majority of Americans from all corners of the country are united in support of expanded background checks for gun sales,” the petition reads. “I’m calling on you to listen to the American people and act to keep guns out of the hands of criminals. It will make our communities and schools safer. Please take action to expand background checks today.”

Along with the petition, OFA released an interactive map this week showing where supporters of the group have been most vocal and influential in the debate over putting restrictions on gun ownership. 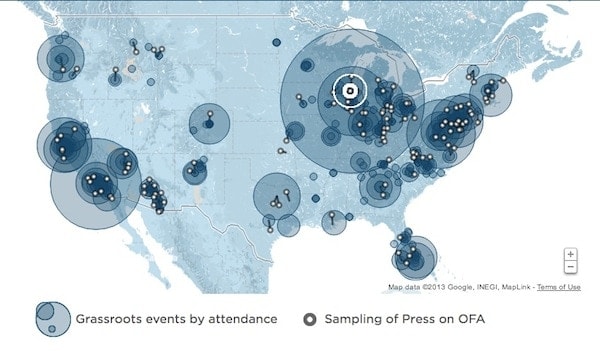 “With thousands of events and over 1.5 million action takers in just the first 14 weeks of OFA, we are seeing an outpouring of support on issues from gun violence prevention to comprehensive immigration reform,” OFA spokeswoman Katie Hogan wrote in an email to the Washington Post.

“When it comes to influencing senators to listen to 90% of Americans in supporting background checks, we have a great opportunity in states with a high level of activity from OFA volunteers that are outraged or thankful at how their senator voted. States like Georgia, Arizona and New Hampshire you are already seeing the effect that voting against the will of their constituents is having on those senators just as approval ratings for senators who listened to their constituents is growing in places like Pennsylvania and Louisiana,” she continued.

However, the Washington Post conducted its own analysis of the data on the map and concluded that OFA supporters were concentrated in states where “Obama’s agenda was already widely popular – and were much less energized in states where Obama needs to win over lawmakers to his side.”

In other words, the progress that the OFA has made may be overstated, as support for gun control in key battleground states has not reached a critical level, i.e. enough to change the minds of lawmakers who voted against the Manchin-Toomey expanded background check bill.

That said, OFA just got a big boost from Democracy Alliance, a progressive organization that is dedicated to countering the “well-funded and sophisticated conservative apparatus in the areas of civic engagement, leadership, media, and ideas.”  At a meeting in Laguna Beach last week, Democracy Alliance picked Organizing for Action as one of its top priorities for 2013, Fox News reported.

Who belongs to DA?  Well, members include individuals with very deep pockets, such as business mogul George Soros and Facebook co-founder Chris Hughes.

It’s unclear at this point how much money DA will dump into OFA.  But it wouldn’t be all that surprising if they wrote a pretty big check.