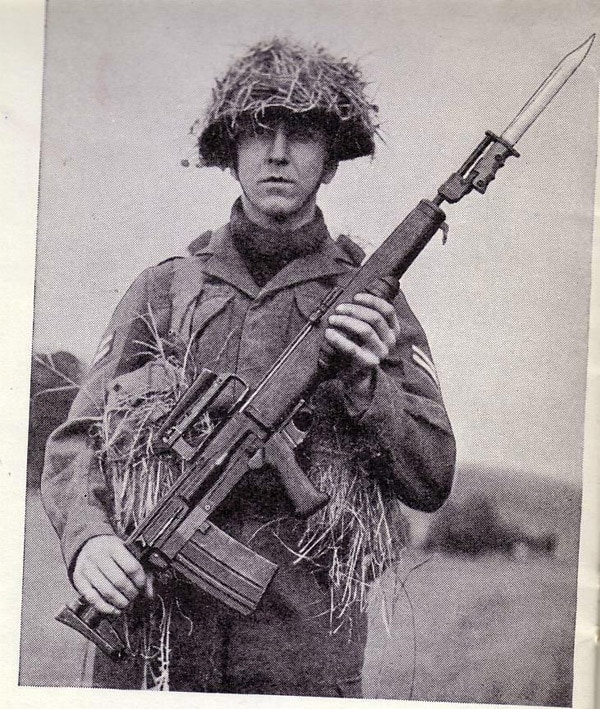 It’s hard to imagine today but for over 150-years the UK firearms arsenal at Enfield armed the world. Their 3-band rifles were the go-to gun of the US Civil War and their Short Magazine Lee Enfield bolt guns kept London from having the street signs redone in German through two world wars.

Then in 1985, everything went pear-shaped.

British firearms needs in the 1980s or ‘God Save the Queen’

In 1954, RSAF Enfield and BSA began production of the 7.62x51mm NATO caliber L1A1 Self-Loading Rifle for the British military to replace their long-serving stocks of Short Magazine Lee Enfield Rifles, a design that had lasted the Brits for nearly 70 years. The L1A1 was a version of the Belgian FN FAL rifle, set up in semi-auto and using SAE or ‘inch-pattern’ templates rather than metric. It proved a hard serving rifle and saw use in the Suez, Malaysia, Aden, Northern Ireland and the Falklands as well as being adopted by close allies Canada, Australia, and New Zealand among others. However by the late 1970s, the L1A1 was a bit long in the tooth, and well, a bit long overall (45-inchs) as well. With most of NATO at the time already using smaller, 5.56mm-chambered rifles such as the M16, FAMAS, and HK33, the UK decided to get on the smaller caliber/smaller weapon bandwagon. 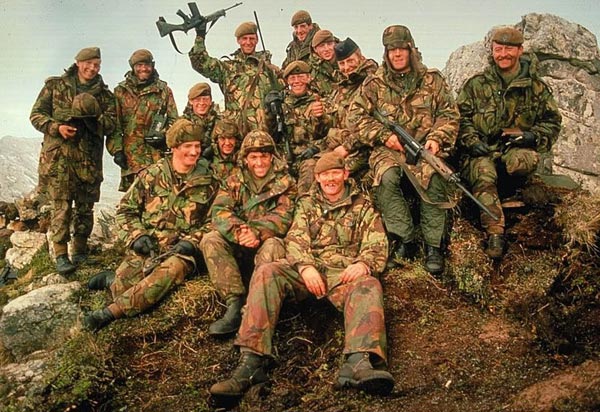 The L1A1, seen here in the Falklands. Compared to the L85 set to replace it, this was a much beefier and more reliable rifle.

After the end of WWII Enfield had designed two new rifles for the British government, the EM-1 (Experimental Model) and EM-2. Both of these guns were abbreviated bullpup designs that placed the 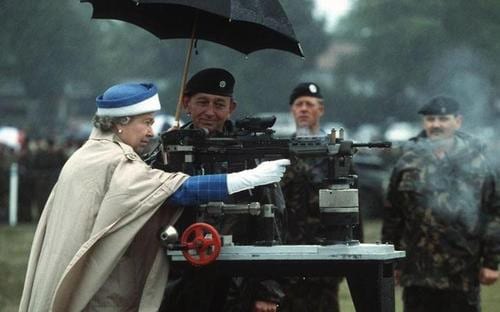 The Queen tests an Enfield L85.

action of the rifle inside the buttstock and behind the trigger group. These guns were very well laid out, revolutionary in their design, fired an intermediate round about the same size as the Soviet 7.62x39mm AK round, and were about as British as they could be. However due to a combination of political reasons too convoluted to revisit here, these guns were never adopted and instead Enfield was told in 1954 to start making the L1A1. So it’s only natural that when the government came back to them in the late 1970s and starting asking about new rifle designs, Enfield started talking ‘bullpup’.

This project led to the L85/SA80 Rifle

Design of the Enfield Bullpup 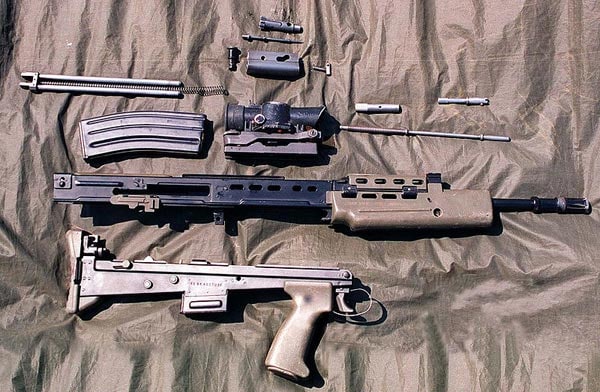 Field stripped L85. Note the gas piston rod on the right and the double rail bolt carrier on the left.

Like the AK and many other modern assault rifles, the L85 rifle was designed to be built with a receiver made from a sheet of stamp steel reinforced with welded inserts. Gas operated with a short-stroke gas piston, the inner workings of the gun resemble the 1960s era AR-18 rifle. A 7-lug rotating bolt and a machined carrier group led to what should have been reliable feeding and extracting.  Instead of the semi-auto only L1A1, this new rifle would be select fire capable of 650 rounds per minute of 5.56mm NATO for as long as the 30-round STANAG magazine would hold out for. The Brits were always fans of supplying the common soldier with optics so the L85 came equipped with the SUSAT (Sight Unit, Small Arms, Trilux), a rugged 4-x scope with an illuminated aiming reticle. Believe it or not, this was quite forward thinking for 1985. 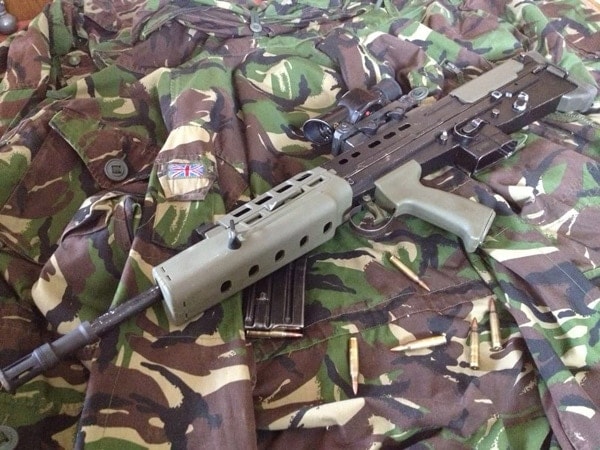 However, what really set it apart was the compact nature of its design. A 20.5-inch barrel with a 1:7 twist 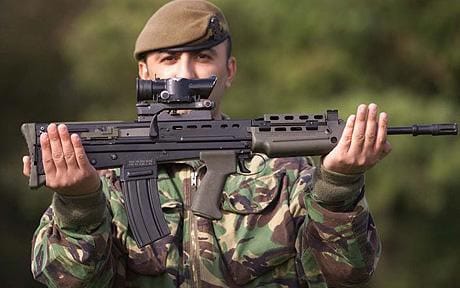 slid into a weapon that was only 30.8-inches overall. Keep in mind that this is roughly the same length as the 14-inch barreled M4 carbine that we know and love today—but with the carbine’s stock totally collapsed. To make things even shorter, a carbine variant chopped another three inches off the total length. To go bigger (and replace the WWII-era Bren gun in UK service) the L86 variant had a 25.4-inch heavy barrel, folding bipod and rear grip so it could fire full auto at 775-rounds per minute and for a more sustained period as a type of squad automatic weapon like the US SAW and the Soviet RPK.

With all this, what’s not to like? Well, that’s the other side of the story.

The gun was adopted in 1987 to replace the L1A1 and by 1994 some 350,000 had come off the lines—being the last real Enfield rifles ever made as the Royal Small Arms Factory (RSAF) at Enfield was shut down soon after. A sad legacy to this indisputable giant in the firearms world, their final gun was something of a lemon. When this futuristic rifle finally came to the field, the wheels fell off faster than you can say ‘The Rolling Stones’. 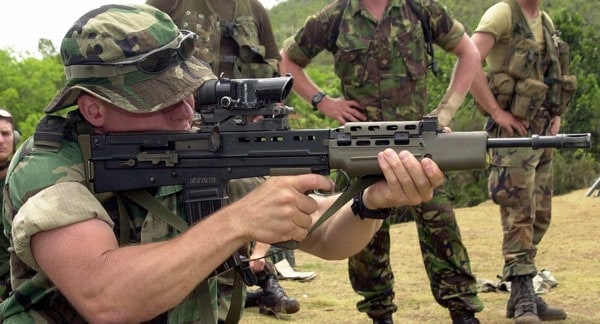 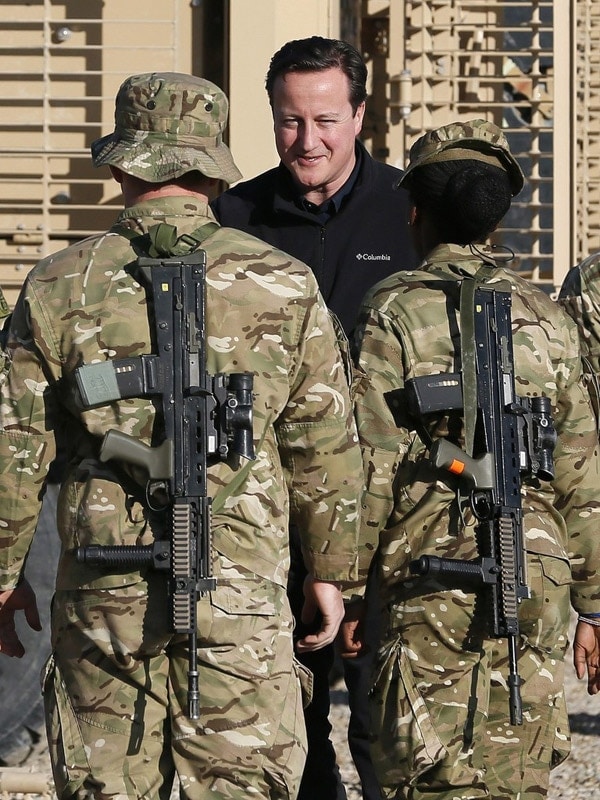 Ejected casings flew back right into the bolt carrier itself, which isn’t very good for staying free of stoppages. The link on the trigger group worked fine in semi-auto but became the cause of almost clockwork jams when firing the rifle cyclical.  It was right-hand ejection only and could not be converted, which made it a hit with southpaw shooters. Shockingly, the most common mechanical failure was the tip breaking off the firing pin, which had no quick and easy field repair. The whole package was also heavier than the (reliable and longer range) L1A1 it replaced at 10.5 pounds vs. 9.5. This led to the gun being derided both by British soldiers and others around the world.  Many British units, such as the SAS, deployed to the First Gulf War in 1991, carried M16s, Sterling SMGs, and shot-out L1A1s to stay on the safe side.

The L85 was not a hit with the UK’s Commonwealth allies. Breaking with hundreds of years of military tradition, one English-speaking ally after another went with anything but the British bullpup. Australia and New Zealand replaced their aging stocks of L1A1s with a bullpup not of British origin—the F88 Austeyr a modified version of the Austrian Steyr AUG A1 starting in 1989. Canada, looking to its neighbor to the south, switched to the M16A2, made locally by Diemaco and dubbed the C7 rifle. Even the small island territory of Bermuda went with the Ruger Mini-14 to replace their L1A1s in the 1980s rather than pick up the last Enfield. The sole overseas customers were military Lilliputians, Bolivia and Sierra Leone. 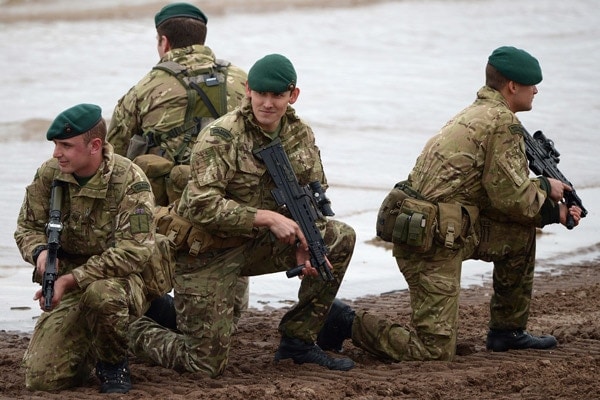 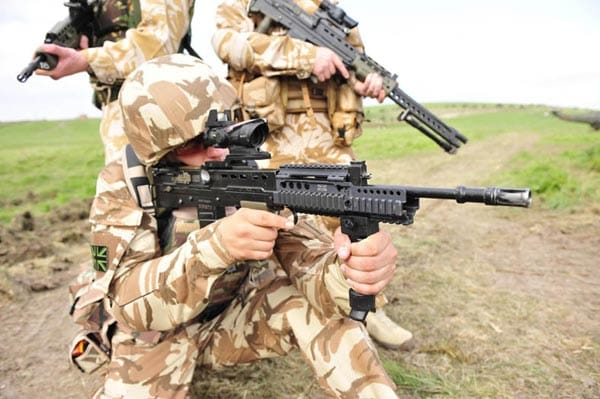 In 2000, a redesigned charging handle, bolt, and extractor were produced for the gun and, once installed on some 200,000 of the already produced L85 rifles, became the L85A2. A Picatinny rail was added as were a few other minor changes and, once this was accomplished, the gun obtained a better reputation for reliability in field conditions. The fact that this work was done by BAE with HK looking over their shoulder did not escape the eyes of many HK fans though.

In many cases, the legacy SUSAT sight has been replaced with a lighter and more modern ACOG. Today the L85A2/L86A2 are still the standard for the British Army and Royal Marines and seems  to be holding up much better than the original design in such places as Afghanistan and Iraq. Still there is lots of talk publicly of scrapping the gun for something else.

BAE L86A2. Check out the bipod and rear grip.

Will You Ever Have One?

Unlike the hundreds of thousands of older bolt-action Enfields, the prospect of any L85s being imported into the states are slim. A few Class III guns are floating around for upwards of $20K for those diehard collectors. Back in 2010, Prexis planned on selling a US made kit version with an incomplete semi-auto receiver for $2400 but it looks like this plan never left the drawing board.

Which isn’t surprising, heck if the Brits don’t even want the real thing, why would we want a DIY copy?