Video Game Publisher Stops Licencing Guns, Will Use Them Anyway 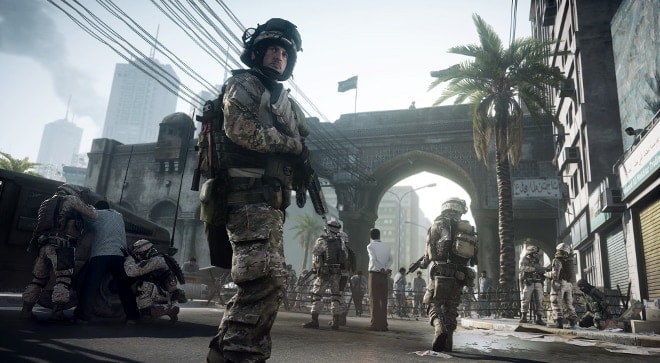 Electronic Arts, major player in the video game industry and publisher of several blockbuster series including “Battlefield” and “Medal of Honor,” has made a statement that they will no longer licence the likeness of real guns for their video games.

But that’s not the whole of it: EA will continue to portray real guns in their games, sans licencing. They plan on dropping gun makers, not the guns. “The action games we will release this year will not include licensed images of weapons,” said EA spokesman Jeff Brown.

EA gave little by way of explanation, although there are and always have been critics of the use of real-world guns in games. This may be in response to the current gun control debate, the shootings that precipitated it, or the comments made by Wayne LaPierre for the NRA.

Following the massacre at Sandy Hook Elementary School, LaPierre claimed that violent video games were the root of the violence, twisting shooter Adam Lanza into a killer.

“We’re telling a story and we have a point of view,” EA’s President of Labels Frank Gibeau told Reuters. “A book doesn’t pay for saying the word ‘Colt,’ for example.”

This will open up EA to other critics, those who dispute their video games’ authenticity, and may even lead to lawsuits.

Their portrayal of the guns may constitute copyright infringement. In other types of media, including television and movies, the producers sometimes need permission — creative clearance — in order to include companies’ products in certain ways. The product doesn’t need to be copyrighted; if a company uses a recognizable object made by another company, it can constitute an infringement of trade dress.

EA believes that the inclusion of these products in their games is constitutionally-protected fair use, and it’s something they’re willing to go to court over.

EA is currently fighting a lawsuit filed against them by Textron, the parent company of Bell Helicopter, over the unlicensed use of Bell aircraft in Battelfield 3.

EA is standing on somewhat firm ground. In the landmark case Brown v. Entertainment Merchants Association, the Supreme Court held that video games constitute free speech, having all the same protections as movies and books.

But because the guns are such a critical focus of these games, as they are the primary way the player interacts with the game world, the owners of the intellectual property may have some say in how their products are used, in the same way the car manufacturers do with racing games.

EA previously donated the earnings from firearm manufacturer endorsements and other promotions to veterans charities.

This move may make EA brass feel warm, but we’ve seen other companies go down this road before. When companies turn their backs against gun owners, gun owners fight back with their wallets. Dick’s, the sporting goods chain, suffered serious losses following their decision to pull “black rifles” from their shelves.

Activision, publisher of the multi-billion dollar series “Call of Duty,” isn’t taking that route, at least for now. They license all the rights of the guns used in their video games.

Time will tell how this will play out for the makers of “Medal of Honor” and “Battlefield.” But we won’t be surprised to hear it in the form of a courtroom decision.