UPDATE: A the request of the US Department of Defense Trade Controls, DEFCAD has pulled the plans for the Liberator pistol from their website.

With the first fully-3D printed firearm now a reality, some people are moving quickly to see the 3D-printed gun banned.

Last week ultraist 3D printing advocate Cody Wilson of Defense Distributed announced the “Liberator,” a single-shot pistol made from all 3D-printed parts (save for a hardware store nail for a firing pin and the ammunition), test-firing it in a demonstration and making the plans public through his online 3D printer plan library, DEFCAD.

“There are states all over the world that say you can’t own firearms — and that’s not true anymore,” said Cody Wilson to the BBC.

“I’m seeing a world where technology says you can pretty much be able to have whatever you want. It’s not up to the political players any more.”

“While I am as impressed as anyone with 3-D printing technology and I believe it has amazing possibilities, we must ensure that it is not used for the wrong purpose with potentially deadly consequences,” said Yee. “I plan to introduce legislation that will ensure public safety and stop the manufacturing of guns that are invisible to metal detectors and that can be easily made without a background check. 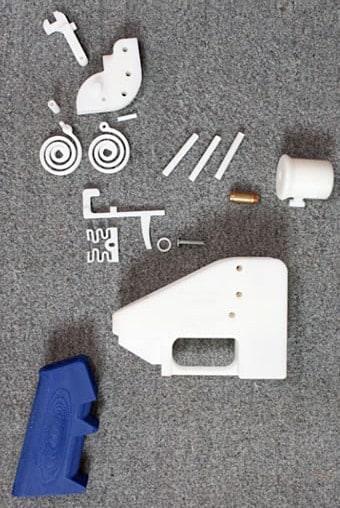 “The firearm designs for the gun known as ‘The Liberator’ can be instantly downloaded and printed anonymously with nothing in place to screen and prevent felons and criminals. The firearm, made using a 3-dimensional printer, has already been able to successfully fire .380 caliber bullets. The new technology has been used to manufactures assault weapon parts, including high-capacity magazines and lower receivers.”

“These weapons create a significant and immediate threat to public safety,” said D.C. council member Tommy Wells. Wells is looking to instate a ban on 3D printing firearms in the nation’s Capitol.

The question of how this legislation will actually prevent anyone from manufacturing a firearm is not clear. That doesn’t meant that some legislators won’t try.

“Now anyone — a terrorist, someone who is mentally ill, a spousal abuser, a felon — can essentially open a gun factory in their garage. It must be stopped,” he added.

Schumer also said that “people that would oppose extending [laws to ban 3D-printing guns] would do so at their peril.”

Of course, the notion that anyone can 3D print a firearm is a bit of a stretch. Defense Distributed spent months trying to find a 3D printer in their budget after losing their original lease when the 3D printer company got wind of their plans. Eventually they acquired a used Stratasys Dimension SST, a commercial-grade 3D printer, for about $8,000.

There are those who would try to marginalize the difficult process of 3D printing, likening it to 2D printing, by stressing the ease of printing out a document to make 3D printing seem easy, and scary.

Including Representative Steve Israel (D-New York), who told Forbes “As we get deeper into this national debate on gun safety it seems to me all the executive orders, all the acts of Congress will not be effective if someone can go to a Staples, buy a 3D printer, and manufacture plastic weapons components in their basements.”

Of course, in time, it is the hope of the 3D printing community that the technology does become that approachable and available. With the costs of 3D printing dropping and consumer-grade machines becoming more capable, at this pace that scenario’s a certainty. There will be a day when almost anyone in America can find a way to 3D print a plastic pistol.

The plans are spreading fast. With downloads exceeding a hundred thousand in the first two days alone, there’s no way to put the genie back in the bottle.

Defense Distributed got a little help from Kim Dotcom, hacker/entrepreneur, in hosting and sharing the files. Dotcom, born in Germany, is currently living in New Zealand and fighting extradition charges with the U.S. He is wanted on charges of copyright infringement and has called out the Obama administration for colluding with movie studios to arrest him.

With the plans now readily available, and no chance of banning 3D printers, we can’t see how any legislation will prevent people from manufacturing Liberators, whether or not they’re legal.

UPDATE: DEFCAD, Defense Distributed’s 3D printer file store has been made to take down the plans for the Liberator pistol. Other websites that host the plans may be affected as well. We’ll keep you informed as things unfold.