Law Professor David Kopel: 'If someone breaks into your house and starts raping you, that's tyranny too!' (VIDEO)

At the 142nd NRA Annual Meetings and Exhibits at the George R. Brown Convention Center in downtown Houston, Texas, Guns.com had a chance to interview Second Amendment Scholar David Kopel.

For those unfamiliar with Prof. Kopel, he is an associate policy analyst at the Cato Institute, research director of the Independence Institute, and adjunct professor of Advanced Constitutional Law at Denver University, Strum College of Law.

Though, perhaps most remarkably, Prof. Kopel is a friend of Guns.com.  I mean, that is a huge honor and distinction being friends with us, wouldn’t you agree?

All joking aside, I’ve referenced the professor’s work in at least a dozen Guns.com articles and had the opportunity to interview him about a year ago, via email, which was very enlightening, but this was the first time we got to meet in person and chat face-to-face.

In the short time we spoke we covered a lot of ground.  In particular we waded into the weeds of the expanded background check bill that was drafted by Sens. Joe Manchin (D-WV) and Pat Toomey (R-PA).

Kopel explained his beef with the Manchin-Toomey amendment, which essentially hinges on two main issues: (1) the provision that is designed to safeguard against a government gun registry actually authorizes a national registry and (2) the provision which is supposed to strengthen existing federal law protecting the interstate transportation of personal firearms in fact cripples that protection.

Kopel’s also written several great articles on the subject that you can check out here or here — but it was nice to have him explain it in person.

Additionally, we discussed his new book, “The Truth About Gun Control,” a 44-page treatise on the subject that is designed to be a quick but informative read, like Thomas Paine’s seminal pamphlet “Common Sense.” 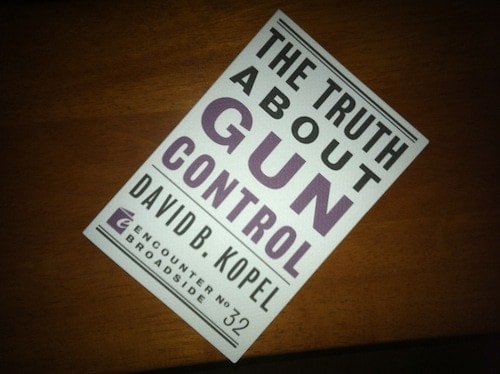 “The Truth About Gun Control” by David Kopel.

Here is one of my favorite highlights from the book, “What is ultimately at stake is the same question that precipitated the American Revolution: whether the American people are the sovereigns in their own country or whether they should be ruled from above.”

This cuts to the core of the battle over gun rights and gun ownership.  One side believes that as a free people we should decide how we want to protect our homes, our families and ourselves.  The other side believes that decision should be made for us by government elites.  It’s rather evident which side Prof. Kopel is on.

Another great quote from the book is “The right and duty of self-defense applied to a householder protecting her children and to militiamen protecting their communities from foreign enemies or from tyranny.”

In the interview, Kopel addressed this point explicitly, noting that tyranny does not just exist on a grand scale, i.e. dictators and despots, but also on a small scale and is a fitting way to describe the violent actions of murders, rapists and child molesters.

“If someone breaks into your house and starts raping you, that’s tyranny too,” said Kopel.  Indeed.

You can purchase the professor’s book at Amazon.com for the nominal fee of $3.84 for the Kindle edition or $5.99 for the paperback.  Guns.com would like to thank Prof. Kopel for hanging out with us.  We certainly had a good time and learned a lot.