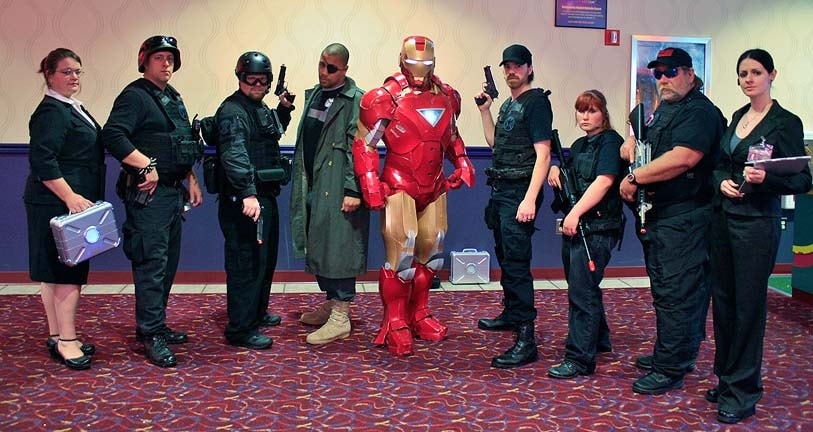 As part of a continued effort to enrich the movie-going experience of its patrons, Capital 8 Theaters in Jefferson City, Missouri, sent a fake gunman into a screening of the film ‘Iron Man 3’ last weekend because, you know, what’s more thrilling to a captivated audience situated in a dark environment than a man decked out in full tactical gear, toting what appeared to be a modified M4?

Plus, it’s not like there’s any stigma associated with an armed gunman and a packed theater on opening weekend of a much-anticipated blockbuster movie…

Oh wait, less than a year ago, a sociopath by the name of James Holmes shot up a movie theater in Aurora, Colorado, killing 12 and wounding 58 others during a midnight screening of  “The Dark Night Rises.”   Yeah, so there’s that.

To say the least, this was a highly controversial prank.  And, of course, like all ill-conceived practical jokes or stunts it didn’t really go over all that well.  To be specific, several shocked moviegoers called the police and reported the incident.

“We received a series of 911 calls stating that a man dressed in all black and body armor and a rifle was walking into Capital 8 Theaters,” Capt. Doug Shoemaker of the Jefferson City Police Department told local news affiliate ABC 17.

Upon receiving the calls, the police sent out SWAT units that were prepared to encounter an active shooter situation. 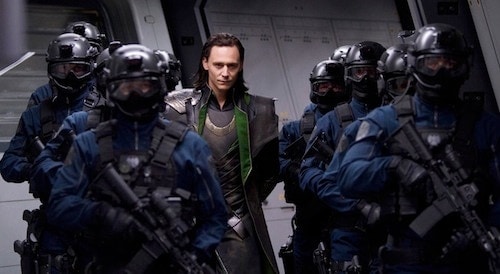 SHIELD Operatives from ‘The Avengers’

“Everything was in place, it’s the opening night of a superhero movie, it’s somebody walking in all-dark clothes, everything pointed to bad things about to happen,” Shoemaker continued. “There’s really no good that can come of this.”

Thankfully, no one was injured and the theater manager, Bob Wilkins, was able to diffuse the situation and explain the stunt to authorities.

Later on, when ABC 17 asked Wilkins if he had any regrets, he said “No, my job is to entertain people.”

Asked if he considered the larger picture while planning the stunt, that is, how it would play in the wake of the mass shooting at Aurora, Wilkins responded, “Absolutely. That’s my number-one priority every day. It’s the safety and security of our guests.”

Since then, the theater has released the following statement:

We apologize and are sympathetic to those who felt they were in harm’s way with our character promotion for “Iron Man 3.” This was not a publicity stunt. We have worked with the Cosplacon group on many movies to dress up and help entertain our customers. We have had many complaints about the members dressed specifically as S.H.I.E.L.D. operatives carrying fake guns. We didn’t clearly tell our customers and some people didn’t realize it was for entertainment purposes only. We apologize that police were called to come out to our theater. We have a wonderful working relationship with the Jefferson City Police Department. Going forward we will take the necessary steps to make sure this doesn’t happen again. Security and safety for our customers is our number one priority.”

The JCPD did confirm that the theater is in good standing with law enforcement, but still lamented management’s poor judgement.

“It’s an unfortunate lack of wisdom in this particular judgement that hopefully will never occur again,” said Shoemaker.

Shoemaker added that the fake gunman (or gunmen) were lucky that there wasn’t an off-duty officer in the theater because that officer might have engaged the actor.  Things could’ve got gone really bad, really quickly, Shoemaker warned.

To be fair, there are some details missing about the context in which the faux gunmen (SHIELD officers) appeared in the theater.  Were they introduced or did they come in following music or was there an announcement to the audience, etc?  Something like that could have allayed the fears of moviegoers and informed them that it was part of the show.

Even if all that was done (which it doesn’t appear that it was), it’s still a very dicey proposition given all that’s happened over the past 12 months.

So, with all that said, what are your thoughts?  Was this stunt in good taste?  Or was it an error of epic proportions?