Most Popular Guns Confiscated by the TSA (GRAPHS)

We’ve all found ourselves in line at the airport, TSA twisting our genitals, stumbling awkwardly as we take off our shoes – but how many of you have forgotten the loaded handgun in your pocket?

Apparently, quite a few. According to the Transportation Security Administration, the agency has been busy as usual in 2013 finding loaded weapons and other banned items at airport security checkpoints across the nation.

Medill’s National Security blog reported last month that the first three months of this year saw an increase in confiscated guns. April continued the upward tick, with 159 weapons found versus 120 in April of last year.

Small and compact pistols lead the way. The .380 ranks as the most popular caliber of weapon to be carelessly or purposely brought onto planes from 2012-13. One of the most common small handgun rounds in America, it’s also popular with concealed-carry buyers, which fits with the TSA’s profile of gun owners who simply forget they’re packing.

Dallas-Fort Worth was the most popular with forgetful gun owners, despite being the third most-trafficked airport in the country. According to Alice Tripp, the Legislative Director of the Texas State Rifle Association, “I suppose someone could misunderstand the ‘rules’ but in today’s world, that simply can’t happen often and will always be a costly mistake.”

The TSA says it alerts local law enforcement authorities when it finds a weapon at a checkpoint – concealed-carry permit or not, and it’s up to the local authorities whether to press charges. 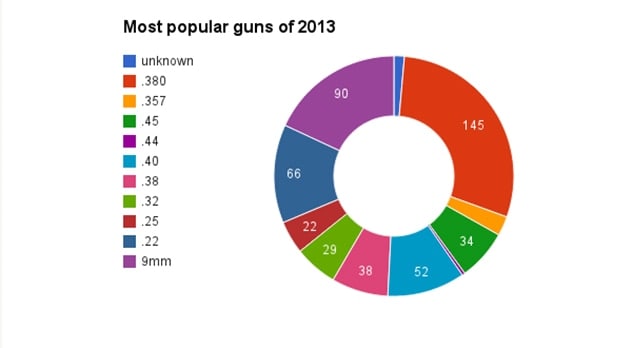