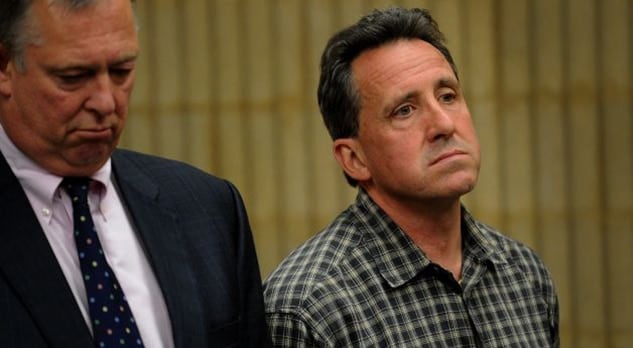 The father of a child slain in the Newtown massacre was offered a plea deal by a Connecticut judge Wednesday to resolve his bad-checks and motor vehicle case.

50-year-old Neil Heslin has become an outspoken gun control advocate since his son, Jesse Lewis was murdered at Sandy Hook Elementary last December. He is accused of writing about $3,600 in bad checks and driving while under suspension in 2011 – having lost his license for a previous drunken driving incident.

According to the deal brokered by Judge Frank Iannotti, the self-employed contractor would serve at least 30 days in jail if he pleads to two counts of operating a vehicle under suspension. Under the yet-to-be-totally-determined conditions, Heslin will avoid jail time on the bad-check rap, serving two years probation and paying $1,000 in fines and court costs.

Heslin came under attack Wednesday from the gun rights group Connecticut Carry, claiming his status as a felon meant he “is not allowed per state and federal law to purchase, own or possess any firearms.” The group boldly asserted, “So often we find that the strongest critics of the right to bear arms are those people who cannot be trusted with firearms themselves.”

Although “[sharing] in the sorrow and outrage of Mr. Heslin’s tragic loss,” CTCarry ultimately went on to argue, “we don’t all have to feel OK with Mr. Heslin profiting off of the tragedy and hurting the gun owning, law abiding citizens who did nothing wrong that day.”