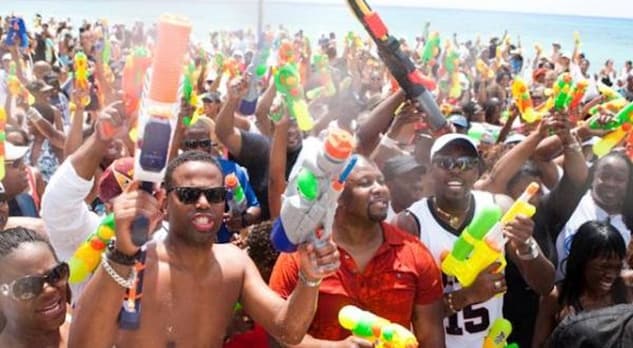 In response to libertarian activist Adam Kokesh’s planned July 4 march on Washington D.C. which participants will be carrying loaded firearms, another pro-gun activist will be holding a softer, wetter kind of protest the day before.

Austin Petersen, a video producer for the libertarian organization FreedomWorks, says that Kokesh’s gun-toting march to the White House is a provocative discredit to the cause. As such, Peterson wants to host a July 3 parade of libertarians who’ll be packing toy guns, like water pistols and Nerf blasters. A legal alternative to Kokesh’s blatantly illegal act of “outrage.”

Dubbed the “Armed Toy Gun March on D.C.” Peterson’s demonstration will follow the same routes around the monuments and National Mall as Kokseh’s “Open Carry March on Washington”

“I don’t like it when Kokesh goes out there and talks about peace and loaded weapons. People who say they believe in peace and non-intervention, you need to show you believe in those principles.”

Nevertheless, Petersen’s march is still very much a pro-gun rally. Instead of loaded AR-15s and AK-47s, the “Armed Toy Gun March” will feature water balloons and “fun signs.” After the parade, participants are encouraged to pummel each other with water spray and air-propelled rubber darts.

“I totally disagree with the District’s gun laws, and that’ll be the message of this march,” Petersen says. “But of course safety comes with being responsible, and in order to demonstrate we are responsible citizens, we should behave responsibly, and that’s what this march is all about.”

D.C. Police Chief Cathy Lanier took to the airwaves yesterday to warn Kokesh and his followers that they should expect to be turned back at the District border should they try to cross the Memorial Bridge. Conversely, when asked via email if the Nerf-toting faction of 2nd Amerndment supporters would face similar obstacles, she tersely responded, “No Problem.”