What 3D Printed Guns Have in Common with Cryptography 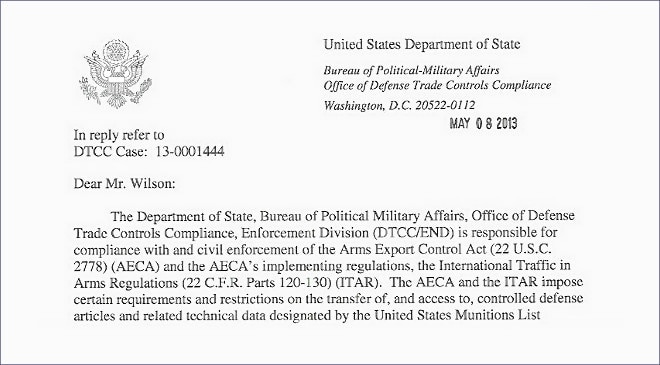 Several days after publishing the plans to 3D print a rudimentary single-shot polymer .380 ACP pistol, “the Liberator,” the State Department had Defense Distributed pull the gun design from their DEFCAD website, among others.

The plans had already been downloaded over 100,000 times from the primary source, according to reports, and have been hosted by other websites all across the Internet before the State Department made their request. Many of these websites operate outside the jurisdiction of the U.S. including Mega and The Pirate Bay.

“Now the gun is out there, nothing can take it back,” said Cody Wilson, founder of Defense Distributed.

What happens to Wilson and DefDist now is anybody’s guess, although the State Department has been down this International Traffic in Arms Regulations (ITAR) road before.

Most notably with Phil Zimmerman and PGP encryption. In addition to regulating arms, weapon components and technical data pertaining to defense, the State Department is the regulating body over cryptography.

In the early ’90s, Zimmerman developed “Pretty Good Privacy,” an encryption scheme that he passed along online to a handful of friends. PGP quickly made it to the Internet where it would be adopted by free communications activists, civil libertarians and dissidents world-wide.

Disclosing (including oral or visual disclosure) or transferring technical data to a foreign person, whether in the United States or abroad.

In 1993 Zimmerman became the focus of a criminal investigation for disseminating his “munitions” overseas. Charges were eventually dropped after Zimmerman published the code in a physical book.

By making PGP available in a book, which could be freely exported, PGP gained status as protected speech. PGP and the Liberator have more in common than just being ITAR-regulated; they’re also in a book.

A student of law and history, Wilson planned to entangle himself in the regulations, in order to define the gray area between federal arms protectionism and freedom of speech. By publishing the Liberator plans he’s put the 3D printed gun in the same place as PGP 20 years ago. “This is the conversation I want,” Wilson told Forbes. “Is this a workable regulatory regime? Can there be defense trade control in the era of the Internet and 3D printing?”

If the freedom of speech element has to do with availability through alternate means, then DefDist is more than covered. After gaining support from Kim Dotcom of Mega, the plans for the Liberator and all of DEFCAD’s materials have been copied and hosted by The Pirate Bay.

“We think the whole idea of a printable object is interesting. You can print guns for sure, but even better you can print plowshares and other things as well. The problem is not the object but what you do with it. Just as with a cooking knife,” said a Pirate Bay insider to Torrent Freak.

“TPB has for close to 10 years been operating without taking down one single torrent due to pressure from the outside. And it will never start doing that,” they continued.

Sharing, downloading and using the plans to build your own 3D-printed pistol is not illegal (provided you are not a prohibited person, don’t make the pistol into an NFA-regulated firearm, don’t manufacture the pistol with the intent of selling it or manufacture it without a metal insert to make it visible to detection systems). The onus lies on Wilson and DefDist, who made the plans available for export in the first place.

It will not be possible to scour these plans off the Internet.

One other thing that’s sure to come up is whether or not these plans even meet the threshold for “technical data.” Obviously they’re a type of technical data, but the pistol is so rudimentary a similar pistol could be made with shop tools and scrap metal.

In fact, much more complicated plans for AR-15 rifles, 1911 pistols and other firearms are freely available from many sources online for home gunsmiths. Why should the plans for a 3D-printed gun be regulated where plans for a CNC-machined gun are not?

Like Wison said to Popular Science, “The thing is, these aren’t the only gun files on the Internet. They’re related to 3-D printing, which is a very corner way of doing it. There’s CNC gun files all over the freaking Internet, man. Not just CNC guns but hobby gun websites. There are files out there to make metal gun components or various dangerous things, but those are low profile. [The 3-D printed gun plan] had to be answered, because it can’t be, like, techno-libertarianism wins.”

Wilson is now reaching out to the Electronic Frontier Foundation, prominent Internet-rights organization, for help with his next careful steps. We’ll have to wait and see what the next move is from the Department of State.

Earlier this year the White House awarded $30 million to the National Additive Manufacturing Innovation Institute (NAMII), dedicated to the advancement of 3D printers and 3D printing.