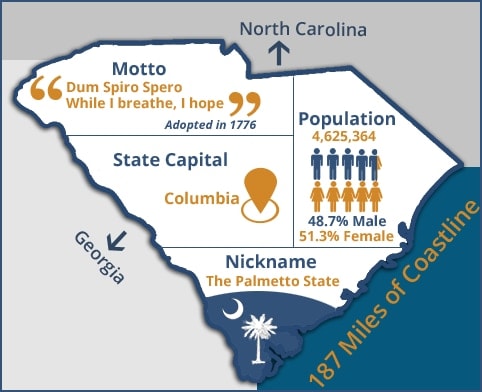 As gun and ammunition manufacturers across the country are packing up and moving out of states passing new gun control regulations, and others are threatening to do the same, South Carolina lawmakers have composed an open invitation for those companies seeking a new place to set up shop.

Lexington County Rep. Ralph Kennedy, who is one of about 55 House members that are backing the invitation, told a local news station, “We just wanna get the word out that we’re here in South Carolina and we’d love to see good businesses … We just want the gun manufacturers to know because they’re up in other states they don’t know us and we want them to get to know us.”

Although the resolution was introduced April 24, it’s received very little attention in the last couple of weeks, but the Palmetto State still wants these companies to know that it welcomes them.

The resolution outlines some of the benefits of relocating to South Carolina, specifically that the state honors the Second Amendment and is a right-to-work state. It also offers huge tax breaks for businesses, including no state property tax, no local income tax, no inventory tax, no sales tax on manufacturing machinery, no wholesale tax, no unitary tax on worldwide profits, and a favorable corporate tax structure. Kennedy adds another reason for the companies to set up shop in his state, “We’ve got good people, they’re hard working, they’d make great employees. We’re a pro-business state and we’re open for business here in South Carolina.”

PTR Industries, a gun manufacturer in Connecticut, is currently considering six different new locations to set up shop, including Horry County in South Carolina. Kennedy extends a warm welcome to PTR and other companies. And apparently the Palmetto State isn’t the only one, as over 40 different states have already contacted PTR in an effort to lure them to their own states.

Some gun and ammunition companies already have multiple locations in different states, making it easier for them to either up and move completely or simply expand their production in the more firearm friendly states. After several months of enticing offers, the much coveted Remington plant in Ilion, New York, just announced that it would be staying put. While the Remington ammunition manufacturing plant in Arkansas just announced plans to expand with an additional $32 million project due to be up and running by summer of next year. Magpul recently starting manufacturing in another location outside of Colorado, after the state passed bans on the very products the company makes. Colt Competition left Oregon last month to set up shop in the gun-friendly state of Texas as well.

And as some states continue to attempt to pass tighter gun control restrictions, more states, like South Carolina, are welcoming them with open arms. “We want gun manufacturers in Connecticut and in other states to know that here in South Carolina, we are business friendly and we would welcome them,” states Kennedy.