The American Academy of Pediatrics has started a renewed effort to push Congress for greater gun control measures, citing gun control as a public health concern rather than an issue of politics.

According to NBC News, the AAP is calling for an assault weapons ban, mandatory background checks and waiting periods before all firearm purchases, a ban on high-capacity magazines, handgun regulations and requirements for safe firearm storage under federal law.

The AAP sent more than 100 doctors to Washington to voice their concerns over gun violence. Dr. Lolita McDavid, medical director for child advocacy and protection at University Hospital in Cleveland, said that she feels the doctors can be “honest brokers” in the debate. And Dr. Danielle Laraque, chairman of the pediatrics department at Maimonides Infants and Children’s Hospital in Brooklyn, said in a Pediatric Academic Societies meeting in Washington, D.C that she believes, “We have to have a collectively louder voice,” and a “call to action, to really look at how we can change public policy that is not often affected by data.”

However, the argument continues over how substantial data will be used in the greater gun control debate, and if it will be collected without bias. Some claim that more guns equal more deaths and that their data should speak for itself to gain greater gun control. While others argue that the data has already been presented and that it clearly shows that gun control is not the answer. While yet, still others argue that there is an underlying problem that goes beyond firearms, background checks and magazine sizes. And others still argue that gun control and/or gun violence should be treated as a public health concern or a disease to be studied by the Centers for Disease Control and Prevention as President Obama previously ordered.

Yet, gun violence was studied by the CDC, following the assault weapons ban of 1994 to 2004, and found “insufficient evidence to determine the effectiveness of any of the firearms laws reviewed for preventing violence.” In addition, the Committee on Law and Justice also concluded that of all the studies considered, greater gun control regulations “did not reveal any clear impacts on gun violence” and “due to the fact that the relative rarity with which the banned guns were used in crime before the ban … the maximum potential effect of the ban on gun violence outcomes would be very small.” 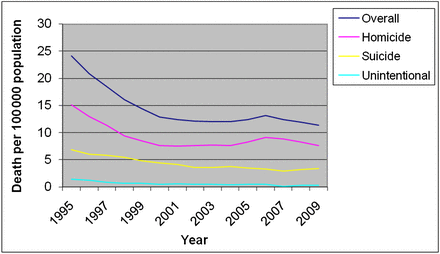 Miller has conducted his own research on gun violence from the 1988 to 1997, but Miller failed to address that the Department of Justice also recently released a study showing that gun violence has actually declined since 1993.

Of course, this isn’t the first time the AAP has become involved in gun control either. Last October, the AAP pressed for support of greater gun control regulations for the sake of protecting children. And as Guns.com author, S.H. Blannelberry, pointed out in a previous article on the subject, the then current gun regulations that were being pushed fail to “target what are presumably the main culprits of youth gun violence: drugs and crime.”