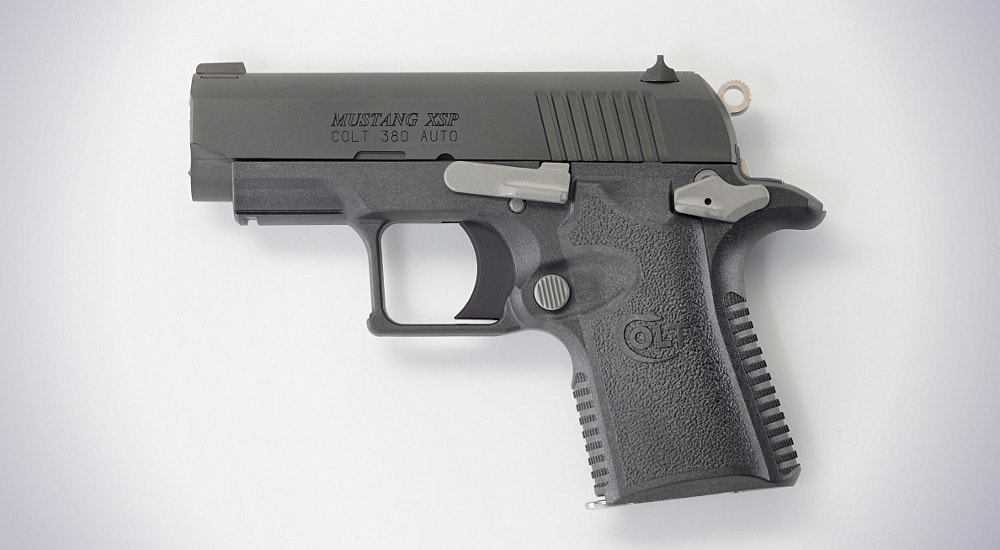 Modeled off the recently reintroduced Colt Mustang Pocketlite, the Mustang XSP takes things to a new level with an all-polymer frame.

“The Mustang and Mustang Pocketlite have been favorites of our customers for years. We are excited to build on those very successful products and evolve them even further to meet ever growing customer needs,” said Colt’s Joyce Rubino.

“The new XSP takes the best of its predecessor models and adds features that will make it appealing to an even wider customer base.”

The pocket pistol, ideal for backup and concealed carry, is fairly similar to the alloy-framed Pocketlite on the surface. Like the Pocketlite, the XSP is loosely patterned off the 1911 design it has an identical capacity of 6+1 rounds of .380 ACP. The .380 ACP has come a long way following the boom in concealed-carry, and these guns are getting more and more respect every day.

The XSP is similar in size and weight to the alloy Mustang. They both have 2.75-inch barrels, stainless steel slides, with the Pocketlight weighing in at 12.5 ounces and the polymer XSP at a hair under 12. Like the other Mustang, the XSP has a hinged trigger. It measures 5.5 inches long, 1.1 inches wide and about 3.9 inches tall. 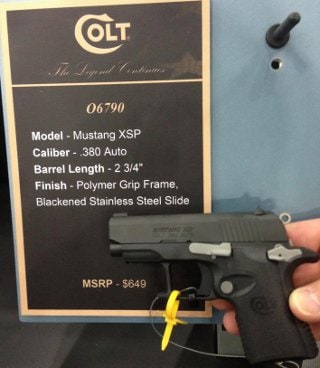 But the XSP hosts enough changes to make it stand out, meaning it’s more than just a plastic Pocketlight. First off, the frame is much more textured than the aluminum-framed Mustang. This should make it easier to handle, although to be honest the original is extremely easy to shoot. The XSP’s grips are molded into the frame and not interchangeable. Also, the slide serrations have been enlarged to add extra gripping surface.

It has an ambidextrous safety and enlarged magazine release. The mag release is also relieved to make it that much more accessible. With the knurled hammer, hammer bite isn’t going to be a problem with the stubby beavertail grip.

The XSP’s frame has something you don’t see on the standard Mustang, a dust cover rail. It may be small, but combined with it’s squared trigger guard we’re sure that we’ll see a lot of accessories from the likes of Crimson Trace and LaserMax. The rail has been contoured to match the Pocketlite frame, so that the XSP will still work with most Pocketlite holsters.

But one of the standout changes is also one of the smallest. Mounted into the matte black slide is a set of dovetailed sights, front and back. The Pocketlite has a fixed front sight. This means that the XSP will be open to other sight options, including night sights.

Priced at $650, the XSP is very competitive with other similar .380 pistols by the likes of SIG Sauer and Kimber. We do expect it to sell for less although Colts sometimes come at a pony premium.

If you’ve been thinking about getting a pocket .380, especially for those warmer days, this may just be your next handgun. Plus, if it’s half the gun the reintroduced Pockelite is, it’ll be one of your favorite range toys, for sure.