Under New York Gov. Andrew Cuomo’s Secure Ammunition and Firearms Enforcement Act or SAFE Act, it is illegal for a gun owner to load more than seven rounds of ammunition in his lawfully owned handgun, regardless of magazine capacity. 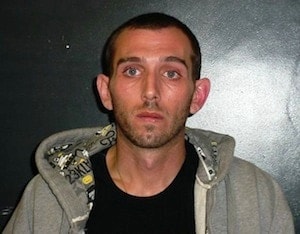 Gregory Dean Jr., 31, of Hopewell Junction, charged May 12, 2013, in New Lebanon N.Y., with violating state’s new gun laws by having a legally registered pistol with two too many bullets in it. Credit: Journal News

On Sunday, 31-year-old Gregory Dean Jr. of New Lebanon, New York, found out about this new draconian law the hard way when state troopers pulled him over and found nine rounds — two more than what’s legal — in his .40-caliber handgun.

According to reports, troopers pulled Dean over because his “car’s license-plate lamp” wasn’t working properly. Upon asking for Dean’s license and registration police noticed a handgun sitting on his passenger seat.

The firearm was legal and registered to Dean, but when troopers saw that he had nine bullets in the magazine, they told him he was in violation of the NY SAFE Act.

Dean was slapped with two misdemeanors, including third-degree aggravated unlicensed operation (apparently he was driving on a suspended license) and unlawful possession of certain ammunition feeding devices as per the NY SAFE Act. He was also cited with various vehicle infractions, according to police.

He was released without bail and ordered to appear May 23 in New Lebanon Justice Court, as lohund.com reported.

While Dean is the first person to be charged with violating the new magazine limitations, he is not the first individual to run afoul with the NY SAFE Act.

Back in March, Benjamin M. Wassell, an Iraq War veteran, was charged with twice selling newly banned military-style ‘assault’ weapons and standard-capacity magazines to an undercover police officer as part of a sting operation conducted by State Police and the New York Attorney General’s Office.

Wassell faces up to seven years in prison for his offense (see video).

I’ve said this in the past, but I’ll say it again: this is only the beginning. Unless New York gun owners mobilize and get this onerous piece of legislation repealed, they can expect to see more of the same moving forward, more law-abiding gun owners getting slapped with criminal charges for violating arbitrary and inane gun laws. Something’s got to be done about this NY SAFE Act.