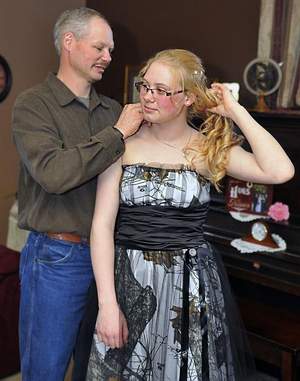 A military dad wanted to get involved with his daughter’s prom, so he figured he’d stitched her up a dress…made out of camouflage.

David Herron served in the Air Force from 1986 to 1991 and currently lives in Marshfield, WI with his daughter Mariah, who loves the outdoors.

“It took me about six weeks to make the dress, a couple days here, a couple days there,” Herron said. A truck driver by night, the former Airman had to spread his time out best he could. Although he had a few sewing tricks up his sleeve from hemming his uniforms, the dress became a whole new project.

What started as joke, quickly evolved into a reality. “When we went to Hancock Fabrics, we actually saw that the roll of fabric was too short, so we had to order more,” Herron said.

The pieces soon came together to make the strapless, black satin waisted gown with black tulle and a thin black ruffle trim on the top. The “snow white camouflage” prom dress was completely designed and created by Herron. He even managed to make shotgun shell primers into “buttons instead of flowers.”

What’s next for the seamstress dad? “When I was in the middle of making it, Mariah said, ‘If this turns out, you can make my wedding dress.’”