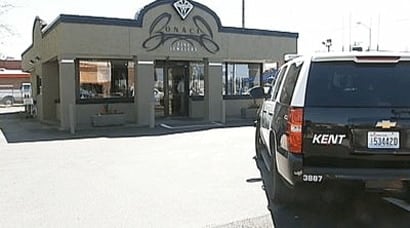 A would-be robber was shot and killed after an exchange of gunfire with a jewelry store owner who was defending his business in Kent, Washington, a town just outside of Seattle, on May 4.

The incident happened around 10:45 in the morning, shortly after the store had opened for business. According to the police report, a man entered the store, gun in hand, and confronted the store owner in an attempt to rob him. The store owner was also armed and instead of handing over jewelry or cash, he shot at the man, which resulted in an exchange of gunfire.

The man then ran out of the store empty handed, but at the time it was unknown if he had been shot or not. It was believed the man was possibly hit twice, but that had not been confirmed at the time.

During the incident there were two employees and two customers in the store, but none of them were injured. The store also had a surveillance system and authorities are reviewing the videos as part of an investigation.

A few hours after the incident, police found a deceased man on a bench near a business in Auburn, about five miles from the jewelry store. The man, later identified as 36-year-old Delearance Fleming of Norwalk, California, apparently died from a gunshot wound.

Police Chief Ken Thomas told Kent Reporter in regards to the Fleming’s involvement in the attempted robbery, “We are 99 percent certain. We are waiting for evidence from the crime lab to match ballistics and confirm the gun,” a process which can take up to several weeks. They are also considering the possibility that Fleming did not act alone in attempted robbery.

The investigation is ongoing and once completed will be turned over to the Prosecuting Attorney’s Office. Although the final decision will come from the PA, no charges are expected to be filed against the store owner, as he acted in self-defense.

Police Sgt. Jarod Kasner told a local news station, “People have the right to protect themselves. It just has to be reasonable. There has to be exigent circumstances and feel that their life may be in danger or threatened.”