Bro, Wrapping Your Gun in Tinfoil Won’t Fool the TSA 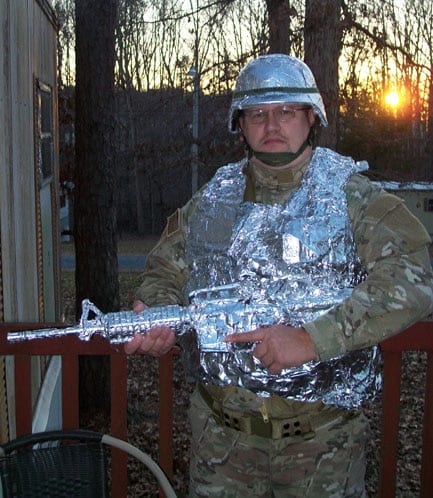 Apparently a man thought wrapping his pistol in aluminum foil would…foil…airport X-ray machines. He was wrong. And now he’s facing a federal criminal charge for allegedly trying to smuggle the loaded weapon on a flight from San Francisco to Europe.

Kerry Lee Bobo, 53, had planned on flying out last Thursday afternoon to Amsterdam when Transportation Safety Administration screeners “noticed what appeared to be a handgun,” in a checked suitcase.

When Bobo’s luggage was opened a loaded Sig Sauer .45 handgun “wrapped in aluminum foil” and a taser were found. Officials then boarded Bobo’s KLM flight and escorted the Atwater, CA man from the aircraft.

Bobo said he was continuing to Nairobi from Amsterdam and packed the pistol “to protect himself from animals while in Kenya.” He figured wrapping the weapon in foil would “thwart airport baggage personnel from stealing it.” Right. Investigators weren’t buying it either.

According to a Homeland Security agent, “I know that some people believe–incorrectly–that aluminum foil can somehow block x-ray and other security screening devices.” Obviously, it doesn’t and Mr. Bobo has been charged with a felony carrying a maximum of ten years in prison.