How scrupulous are gun dealers in the Dallas/Fort Worth area when it comes to potential straw purchasers?

Answer: not very, if we are to accept the findings of a local news affiliate’s ‘I-team’ report, which following an undercover investigation found that almost half of the gun shops tested were willing to sell a firearm to someone who indicated he/she was not the actual buyer and that he/she might be selling it to someone who could not pass a criminal background check. 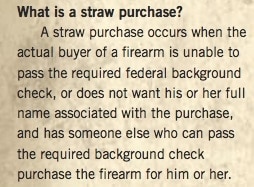 The CBS 11 I-Team, consisting of Investigative Journalist Mireya Villarreal and her photographer Mike Lozano, went to a total of 11 gun stores and pawn shops and at each store “would handle the gun to make sure the clerk knew exactly who’d be using it once we walked out.”

After talking with the clerk, one of the two would intimate that he/she may not be able to pass a background check and then ask if the other could purchase the gun instead, which is the essence of a straw purchase.

Here is the transcript from the Cash America Pawn Shop encounter.  Initially, the store clerk refuses to sell the firearm.  But then the manager comes over and sanctions the deal.

Mike Lozano, CBS Photographer: I don’t know if I’d pass a background check. Would she be able to buy it?

Mireya Villarreal, CBS Investigative Reporter: Would I be able to buy the gun instead?

Cash America Clerk: If you wouldn’t have told me that, maybe, yea.

Mike Lozano: But if she’s approved, y’all are cool selling to her?

Here is an excerpt from the A Action Pawn Shop exchange:

A Action Pawn Shop Clerk: If y’all go anywhere, it’s called a straw purchase. And since we deal with the FBI and the ATF, they back check on us. But they don’t really check check that hard.

The I-Team never purchased a firearm.  So, technically, no crime was committed.  But the two shared their findings with UT Arlington criminologist, Dr. Alejandro Del Carmen.

“I think what your videos showcase is the fact that we have a problem. That this is a problem going on in the United States,” Del Carmen said and explained that the FBI and the ATF lack the necessary resources to conduct regular checks on gun shops.

“If that transaction would have taken place, it would have been a criminal offense. And if a federal agency would have the capacity to be able to detect this and to put undercover agents to do this, they would have probably closed the place down and indicted the people working there,” Del Carmen explained.

In response to the I-Team’s report, those gun stores and pawn shops that failed the test released statements defending their reputation and stating, in one form or another, that they would conduct internal reviews and take appropriate action as warranted (to read how each store officially responded, click here).

It’s already a federal crime punishable up to 10 years in prison to knowingly sell a firearm to someone who is mentally ill or a convicted criminal.

In other words, the laws are pretty clear on this subject.  As noted by former NRA President David Keene in the video, “What we say in the instance of straw purchases and in other gun crimes, you’ve got laws. Take those laws and prosecute criminals. And if you do that you’re going to solve a lot of the problem.”

So, the answer is not creating new laws but enforcing the existing laws that are already on the books and holding unscrupulous gun store owners and clerks accountable.  To that latter point, while it’s possible that these were isolated incidents that misrepresent the vast majority of gun dealers and pawn shops, at least in the Dallas/Fort Worth area, it’s also possible that this is indicative of a larger trend.  Whatever the case may be, the gun community should not take this report lightly.  This feckless behavior makes us all look bad and is exactly the type of thing that gun control advocates pounce on and use to push for tougher and more restrictive gun laws.