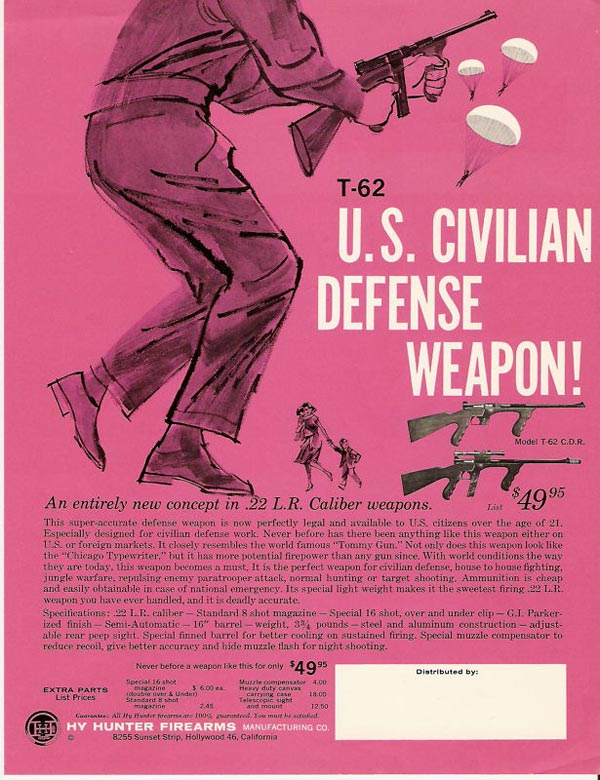 The T62, a modified AR7 semi-automatic .22. This gun was sold as a civilian defense rifle against random soviet paratroopers in the 1960s.

Today we think of the humble 22LR as a round best left for slaughtering tin cans.

But what you may not know is that this much loved pipsqueak has been pressed into both military and police service over the years, in a rather unique series of weapons—rimfire subguns.

Modern shooters have always held the .22 LR round (which dates back to the 19th century and is one of the cheapest and, until 2013, most readily available cartridges available) to be the perfect training round for military and law enforcement and with a lot of familiarity with the round at the target range came a lot of experimentation.

It didn’t take these shooters long to discover that if you take this same practice round, put it in a low-recoil select-fire rifle capable of going full-auto and give it a huge magazine, you now have something much different than a cheap to shoot plinker.

Although the 22LR round was never designed as a man-stopper with very marginal one-shot stopping capabilities, a burst of 15-20 of these rounds could ruin what plans you had for the rest of your life. Additionally, guns built around these comparatively low-pressure rounds could use lighter materials than full-sized rifles firing high-velocity cartridges thus keeping the weight and cost down—always buzzwords in military trials. 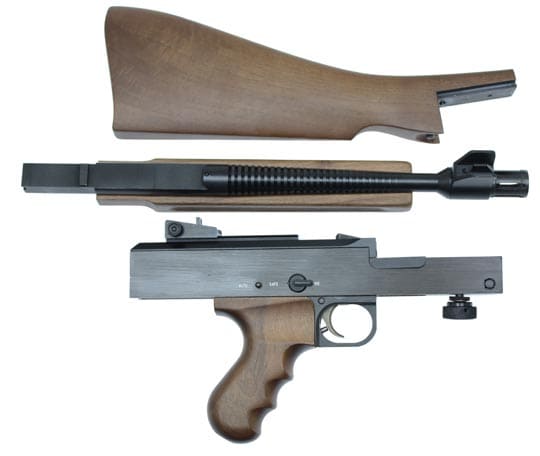 AM180, perhaps the most copied .22 subgun, disassembled.

From these humble beginnings, the .22 submachine gun formula was hatched and has been repeated often, with mixed results:

Neal submachine gun was designed for the US military in WWII but was never put into production.

With World War Two driving the train for new, better, faster, and lighter handheld guns, a fellow by the name of Ernest C. Neal in 1942 designed a 22LR simple delayed blowback submachine gun that used five rotating barrels, each fed by a 10-round rear-inserted helical magazine.

This truly um…different…design could empty these fifty rounds in just one second flat, firing at a ripping 3000-rounds per minute. The concept was that it could be used as an ambush weapon in city/jungle fighting.

Back in the 1960s Dick Casull (yes, that Casull) came about with a handy little room broom that he christened the Casull-290. This gun was a simple 22LR blowback design that fired from an open bolt, very similar to that of the Thompson submachine gun but without the Blish Lock. The gun also had a very Tommy gun-like styling to it, with the buttstock removed at the push of a button.

However, instead of the under receiver drum and stick mags of the “Chicago Typewriter,” Casull’s rifle used a flat pan magazine like the old WWI era Lewis gun that held 290 round of ammunition fed by a wind-up spring.

That’s not a misprint. That is 290-rounds of 22LR or about half of a brick. Held in three columns across with the base of the rounds stacked against the inside wall of the magazine, it fed hopper style into the top of the gun’s action which ejected spent rounds strait downward.

The cumulative effect of hundreds of 22’s impacting on a target in rapid succession enabled the gun to destroy cars, demolish cinderblock walls, and penetrate hard body armor. Not bad for a gun that still was just 35-inches long and weighed 10-pounds with a loaded magazine. 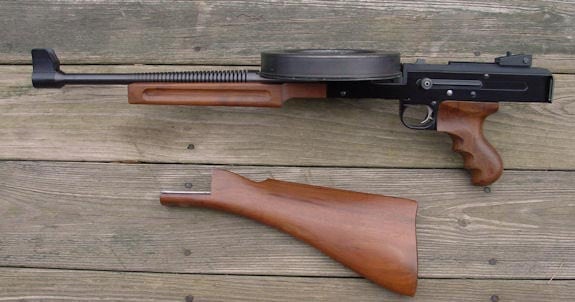 AM180 with buttstock removed. 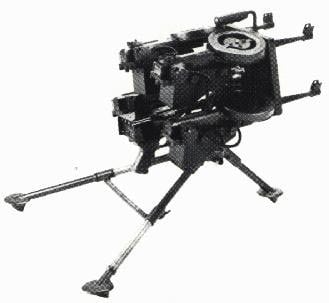 Picking up where Casull left off, the American Arms International Corporation (AAI) out of Salt Lake City started selling a version of the Casull with an improved 180-round mag. These guns had a number of small law enforcement sales, especially to corrections agencies. It was seen as the perfect tool for breaking up prison riots. The Utah Department of Corrections bought a good quantity of these guns, equipped with Laser-Lok active laser sights in the 1980s.

ILARCO acquired the rights and even tried to make sales of the guns to military users overseas, marketing twin, and quad mounts. They even tried to sell an ultra light armed with eight of the guns to the Coast Guard to interdict drug runners. It is believed that the US Bureau of Prisons still maintains a supply of these guns.

AM180 firing with close up of pan magazine showing feeding method.

A few new select fire guns are being made today on Pre-86 receivers by E&L Manufacturing in Oregon for those with about $12K to spend. That is unless you have a buddy in Yugoslavia who can get you a… 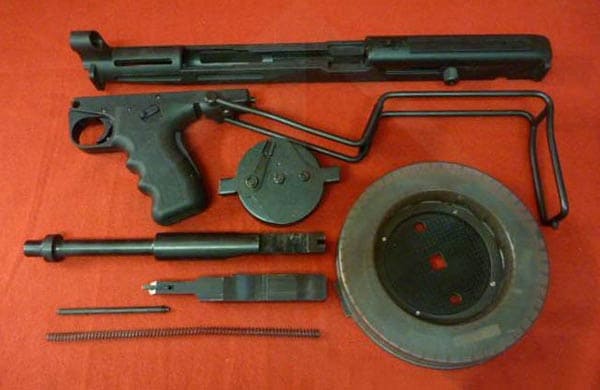 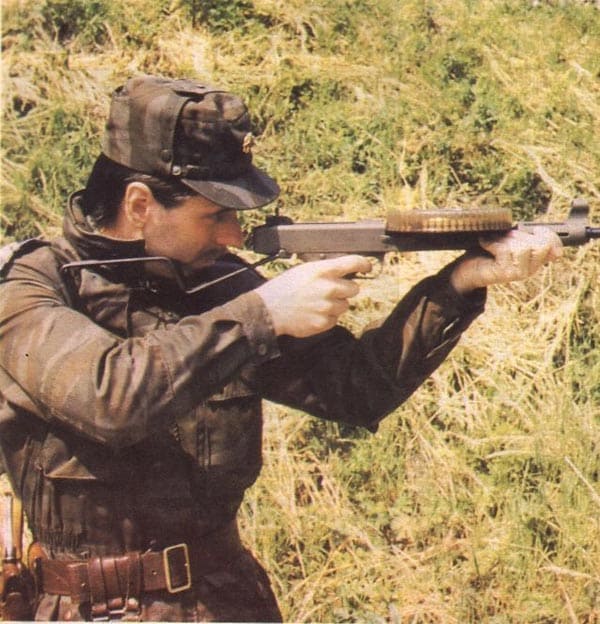 Yugoslavian MGV in the field.

The former communist country of Yugoslavia apparently really liked the AM180, so much in fact that they cloned without asking. With the name changed to MGV-176 (reflecting the magazine capacity), it had the same action as its American counterpart.

Simplified with the use of plastics and a tubular folding stock, the gun was sold abroad and used by police forces in the country in the 1980s and by the 90s these plumbers’ dreams appeared in the hands of numerous parties on all sides during the Balkan wars, often with fitted suppressors.

Besides the rifles mentioned above, there is the Norrell Trigger Pack and TEK Gunworks bolt arrestor options for the millions of 10/22s out there. These run about 10K each when you can find them, and all Class III paperwork applies etc.

They use standard 10/22 mags, which are all smaller than the 165-275 rounders of the AM180, but still make possibly one of the best plinking guns ever. There are also 22LR conversion kits for NFA registered UZI and M16 platforms that will turn these centerfire bruisers into rimfire lead slingers. 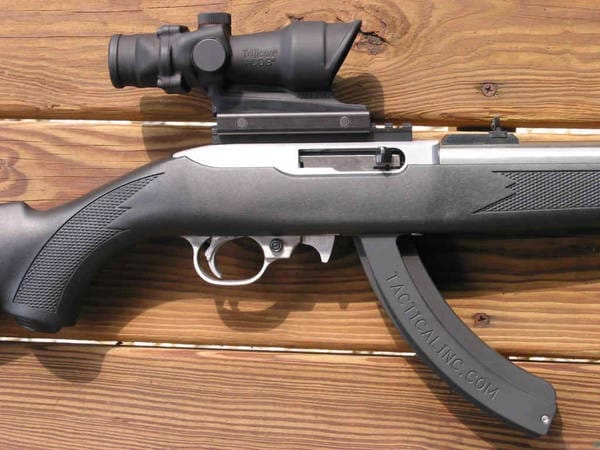 All of this of course, provided the ammo can be found. Today I have problems keeping my daughter’s single-shot Cricket stocked.