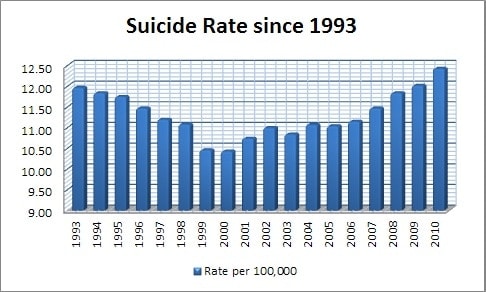 A report published recently by the Center for Disease Control shows a disturbing rise in suicides. While the current gun control debate has been centered around assault rifles, high capacity magazines and background checks, there’s been less talk of mental health. The main focus on these needs is portrayed through mass killing sprees and child victims, but one aspect of lives taken at the end of guns that has been largely ignored: Suicides.

The CDC study shows that suicide rates increased more than 28 percent from 1999 to 2010 in those who were 35- to 64-years-old. The rate of suicides in which firearms were used has also now jumped to around 19,000 out of 31,000, which accounts for two-thirds of all gun-related deaths. In addition, in an almost mirrored statistic, gun-related suicides equal more than 19,000 of the 30,000 total suicides each year.

Additionally, only one in every 45 suicide attempt is successful, but a Harvard study recently cited that the success rate for suicide drastically increases when firearms are used. And the reason is quite simple: You’re much less likely to survive a self-inflicted gunshot wound than you would other means, such as an intentional drug overdose.

Also according to the Harvard study, those with firearms in the home are more likely to commit suicide. The study states that the reason behind this is likely because suicide is an impulsive action, so those with firearms in the home have an immediate and lethal means of carrying out the suicide. Some, including Senate Majority Leader Harry Reid, feel that by incorporating a mandatory waiting period for the purchase of firearms suicides can be prevented and thus save lives.

However, a study conducted by the National Institute of Health claims the opposite: “that most suicides are not attempted impulsively, and in fact involve a plan.”

While it may seem easy to conclude that by taking guns out of the equation, suicides can be prevented and lives can be saved, it may not be that easy. As Dan Keating points out in a study on gun deaths conducted for The Washington Post, worldwide the statistics aren’t comparable with those in the United States. In other words, states in the U.S. with higher gun ownership have higher gun-related suicides, but countries around the world with higher gun ownership rates don’t necessarily have higher gun-related suicides and vice versa. So, the answer is not simply to remove guns from the equation, as the question – and the problem – goes much deeper than that.

While both mental health and suicide is a complex issue – as is preventing violence carried out by those with a gun and ill intentions – this is something that certainly deserves more attention than it has gotten in recent months and years, and it’s definitely not a problem with a simple answer. 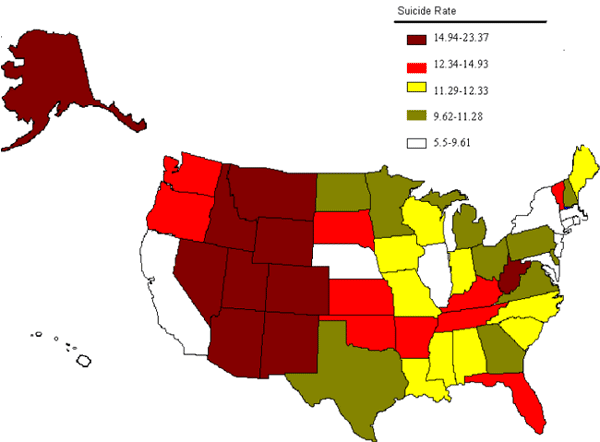 Pro-gun advocates claim that guns save lives while gun control advocates dispute that guns take lives, and both sides argue that their solutions will result in less tragedy. If the focus, from either side, is to save lives – and who can argue with wanting to save lives – then perhaps the focus should be shifted from guns to a bigger picture problem.

As Carolyn Reinach Wolf, a New York lawyer who works with schools to identify “red flag behavior” through a mental health legal firm, states, “The conversation needs to change. We need to have a discussion about people with mental health issues and how we get them into treatment to lead more normal lives. In turn, I believe, there will be less acting out, less violence by definition … someone who is mentally stable doesn’t walk into an elementary school and shoot little children between the eyes. It just doesn’t happen.”