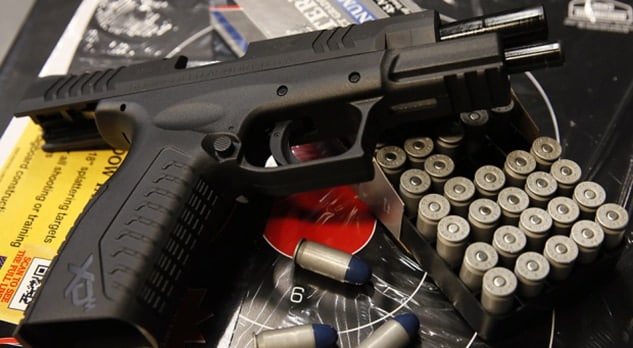 A police officer who reported being shot by a “gunman,” while raiding a party Saturday has had her gun seized by detectives who now believe she accidentally shot herself in the leg.

The incident occurred Saturday night when the officer, in her 20s and with three years on the job, apparently drew her weapon shortly after 10 p.m., ran down a hill only to accidentally discharge her 9mm service pistol in her leg.

The officer radioed for assistance, saying she’d been shot. Moments later comrades arrived to carry her to a waiting ambulance. But the wounded cop never mentioned she had shot herself and a subsequent ground and helicopter search for a “gunman” commenced.

Police questioned over 30 people who had attended the party in a massive search which included two forces and overtime expenses. No weapon nor gunman was found.

Back at the hospital, doctors and police became suspicious when they learned the bullet was fired down into the officer’s leg. When detectives finally seized the policewoman’s pistol, its magazine was short by one bullet.

According Gatineau Police officer Pierre Lanthier, the wounded officer is still in “shock” and not ready to be interviewed about what happened. Lanthier went on to explain the working theory of a self-inflicted gunshot wound was raised “after all the statements we got from police and witnesses.”

Meanwhile, the wounded officer remains in the hospital surrounded by friends, family and colleagues while she awaits minor surgery and perhaps major consequences back on the job.  Once again, it goes to show it’s usually the lie that gets you in trouble.