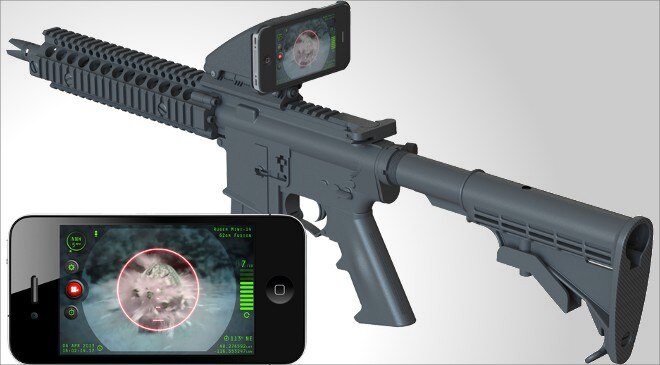 The Inteliscope, by InteliScope, is a way to connect your iPhone to your rifle. And it’s not a bad idea. No, really, hang on a sec.

At first blush the system looks like a means to part fools and money, but the concept is quite sound. The system combines both a mount and an app, using the camera as a both-eyes open optic and the software for added features.

The app side of the Inteliscope lets you customize your crosshairs and adds up to 5x (digital) magnification. It will also let you record your shooting. It includes a shot timer for running drills and for shooting in the field, a compass and GPS. The app will even find information on your location’s prevailing wind if it’s available.

The product page also says the app provides “ballistics data,” but we’ll have to wait and see what that means, exactly.

The hardware side includes a two-piece mount, one which acts as an iPhone case and the other attaches to Picatinny rails. 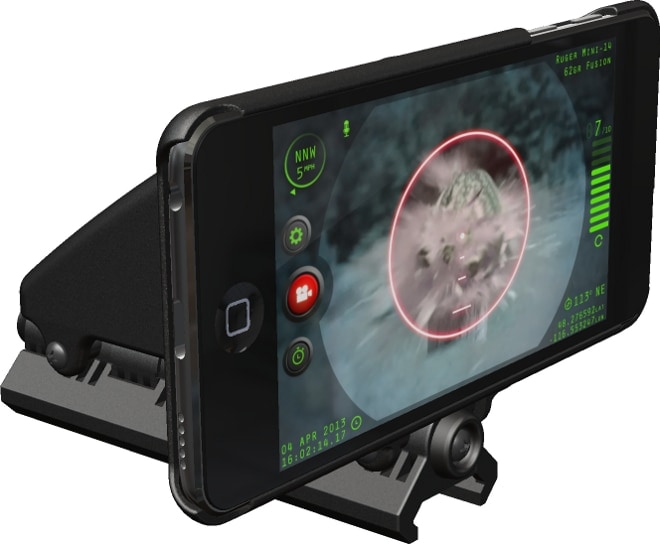 However, that doesn’t mean the Inteliscope doesn’t have a few flaws. Starting with the construction itself. It’s a polymer mount with a rubberized finish. Not that we expect any iPhone accessories to have to stand up to a lot of abuse, but polymer mounts are generally avoided for good reason; we’re also skeptical of the current design’s ability to hold a real zero. The flipside is that it’s probably lighter than an equivalent aluminum or steel mount.

Then there’s the issue of where the mount rests: directly over the bore. While it’s the traditional place to mount scopes, the truth is that most people won’t use the Inteliscope as an alternative for glass. They’ll use it for the features it brings with it.

Putting the iPhone directly over the bore takes up a lot of the shooters field of view, which depending on the user might not be a shortcoming. But mounted horizontally or vertically, it puts the camera well over and to the side of the bore.

But at $70 there are worse things to spend your gun-toy budget on. This could wind up being a lot of fun, and may even come in handy for certain applications. InteliScope is taking pre-orders for Inteliscopes for the iPhone 4/4s, iPhone 5 and iPod Touch.

We’d like to see another design, one that hangs the iPhone off the side of a rifle. By putting the phone there, the camera will be much closer to the rifle bore and let the shooter decide whether to use the system or their regular sights or optic. InteliScope could probably even charge more for something a little less obtrusive.

The iPhone is a particularly flexible tool, and implemented correctly, could bring a lot to the shooting world. This is a neat idea, if just short of 100 percent. It’s still interesting to the point that we’d play around with one, absolutely.