Beretta has been making news in 2013.  They’ve already launched their ARX 160 in .22LR.  That rifle is a prelude to the ARX 100, which they debuted at the recent NRA Convention.  And if you’d rather have something a bit smaller, they’ve set the bar for pocket carry with the Pico.

But that’s only part of the news.  Behind the scenes, the politics in Maryland have been threatening Beretta’s ability to do business in the state, and even their ability to fill government contracts.

And then yesterday, Maryland’s Governor signed SB281 into law.  And that makes it official.  Beretta, anticipating this eventuality, has been considering its options.  And now they’ve made their intentions official.  Beretta will be moving at least part of their production and warehousing out of Maryland.

Maryland’s new law will restrict the number of rounds allowed in magazines to 10.  While this won’t impact Nano, or Pico production or distribution, the magazine limit will make import, warehouse it, difficult to work with the 92, 96, PX4, and the ARX 100.

Standard capacity M9 magazines couldn’t be brought into or warehoused in the state.  The magazine restriction wouldn’t shut Beretta down, but it would make distribution of the full sized pistols (including the M9) much more complicated. 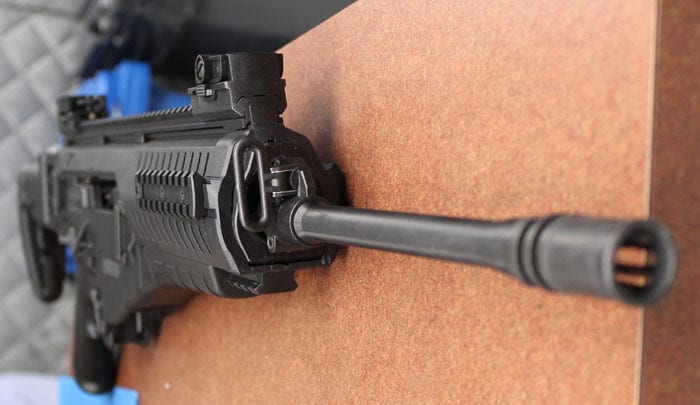 And the “assault weapon” restrictions will hit the ARX line hard.  The ARX 100 would be illegal in Maryland.  While that may not hinder production of the 5.56 tactical rifle, Maryland residents (some of whom make the ARX 100) couldn’t own the gun.  This doesn’t sit well with Beretta.

If that weren’t enough, the new restrictions on Maryland FFL holders will also apply to Beretta, who holds FFLs in the state.  Beretta’s ability to service guns at their Maryland facility (where the also teach armorer classes) would be curtailed.

And there is always the chance that this one bit of legislation might be the gateway to more restricitve measures.  With that in mind, Beretta released a statement appeared on their blog yesterday.  The message of the statement is clear: “The idea now of investing additional funds in Maryland and thus rewarding a Government that has insulted our customers and our products is offensive to us so we will take steps to evaluate such investments in other States.  At the same time, we will continue our current necessary operations within Maryland and we are thankful for and welcome the continued support of our employees as we do so.”

Beretta sees SB281 as an insult to their corporate presence.  As such, they’re not going to increase their support of a state that insults them.  The statement means they are staying and expanding out of Maryland.  The carefully worded declaration that they will “take steps to evaluate such investments in other States” leaves them some room, but the message I took away from my visit to Accokeek at the end of March was that Beretta has every intention of expanding the company elsewhere.

Beretta has to stay in Maryland to continue to meet contract obligations, and wants to stay in Maryland because they are loyal to their employees.  Their M9 contract, alone, requires constant production and can’t be interrupted by the cumbersome process of moving machines (and employees).  But the future is wide open.

They’ve just tooled up for the production of the ARX line, and the Pico.  These will stay in Maryland for their launch, at least.  But there will be new products coming.  The last few years have seen a steady increase in the diversification of Beretta USA’s product line.  As new gun are designed and launched, production, warehousing and distribution will happen somewhere else, in a different state.

Where?  We don’t know.  And Beretta is still not saying.  We can assume it will be in the south, or the west.  or the southwest.  We know from our conversation with Governor Perry that Texas is courting their business.  It could be across the state line in Virginia.  We’ll wait and see.  But look for some announcement about where they might go to come soon.

There is one thing that we know.  Beretta has been loyal to Maryland.  Maryland has now snubbed a company that makes significant contributions to the state’s coffers.  And Beretta won’t be bullied.  This debacle is Maryland’s loss.